The governor's panels of doctors have questioned mask efficacy when studies have shown they provide a barrier from viral respiratory droplets from reaching others. 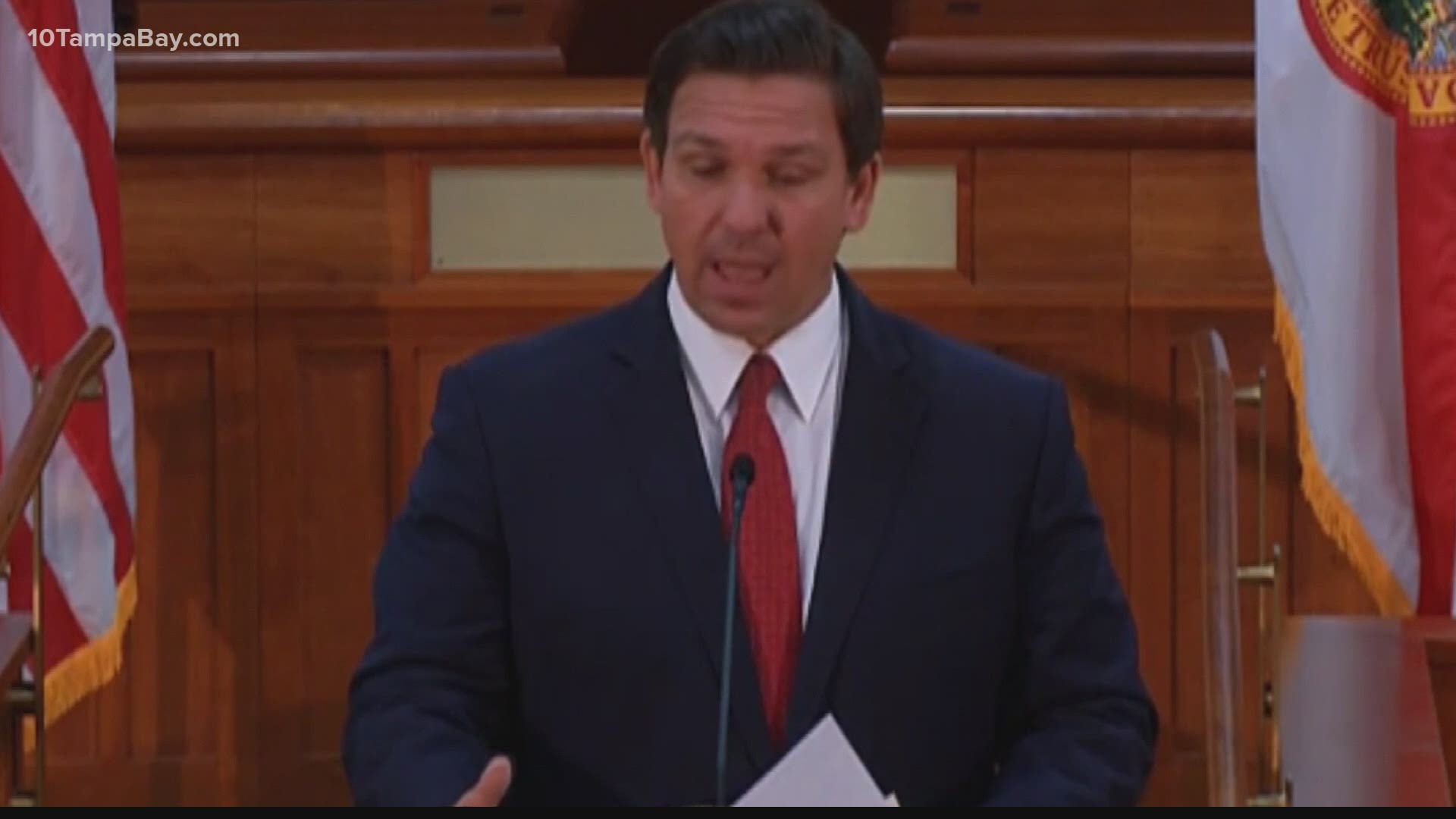 TALLAHASSEE, Fla. — Just days after calling a news conference to defend himself against what he called an unbalanced "60 Minutes" report on CBS, Florida Gov. Ron DeSantis reconvened a hand-picked panel of doctors and scientists to attack big tech.

Last week, YouTube removed a video of DeSantis and that same panel for what the company called COVID-19 "medical misinformation." The video had been available to watch on 10 Tampa Bay's YouTube page after being live-streamed when the governor was speaking in March.

"We’re not going to be silenced,” DeSantis said, pushing back against the tech giant.

The platform cited misinformation that contradicted the consensus of local and global health authorities for its decision.

“Do we really want our discourse limited by a handful of very large, wealthy, Silicon Valley companies?” DeSantis asked. “And is the discourse going to be filtered, basically, through the whims of their ideology?”

The governor brought back members of that same panel who, once again, questioned mask efficacy and the merits of lockdowns. But this time, they did so with an added focus on what they called censorship.

“This is almost the end of our civilization if we have this sort of censorship, I’m afraid,” panelist Dr. Scott Atlas said.

“Let’s hear the argument. Let’s see the evidence that YouTube used to decide it was misinformation,” added panelist Dr. Jay Bhattacharya. “Let’s have a debate.”

The Centers for Disease Control and Prevention continues to stress the importance of mask-wearing and social distancing to limit the spread of COVID-19. Studies have shown masks provide a barrier from viral respiratory droplets from reaching others

Critics, however, say DeSantis is no saint himself when it comes to excluding opposing viewpoints.

“The governor keeps on going after big tech and using that kind of rhetoric because it appeals to his base,” said Democratic State Representative Anna Eskamani, who watched the governor’s hour-long news conference.

Eskamani says when it’s come to forming COVID task force groups or panel discussions on issues like reopening schools, the governor is notorious for excluding opposing viewpoints and presenting only one -- his own.

“Governor Ron DeSantis practices and ideology of convenience. He complains about censorship from his perspective, all sides are not being heard, and yet he does not share all perspectives on the issues that he deals with every single day,” Eskamani said. “The Governor is complaining about censorship, but today he had an hour-long press conference that was aired on TV outlets and online that was delivered without any type of censorship.

"So, again, his concerns about but censorship don’t apply to him. He continues to perpetuate whatever his opinions are. And they are heard.”

DeSantis made it clear he plans to use the YouTube decision to fuel the so-called big-tech bill working its way through the Florida legislature. The legislation was introduced after former President Donald Trump was de-platformed.

“Because, quite frankly this is even more egregious than what I thought had been happening,” DeSantis said.

“I found it to be a distraction from legitimate problems happening in Florida every single day,” Eskaman said. “And, I also felt like I was watching a bunch of climate deniers acting like they were the experts on climate change. These are not folks who should be given a powerful platform to give public health information, especially when they’ve been discredited by so many others time and time again.”

DeSantis says there is no shortage of misinformation on YouTube and other platforms, so he questions why some speech is targeted while some is not.

But critics say this isn’t a wild conspiracy online. They say it’s about people’s health and well-being.