Greene was sworn-in to represent Georgia's 14th District less than a month ago. Now a California congressman plans to introduce a resolution to expel her. 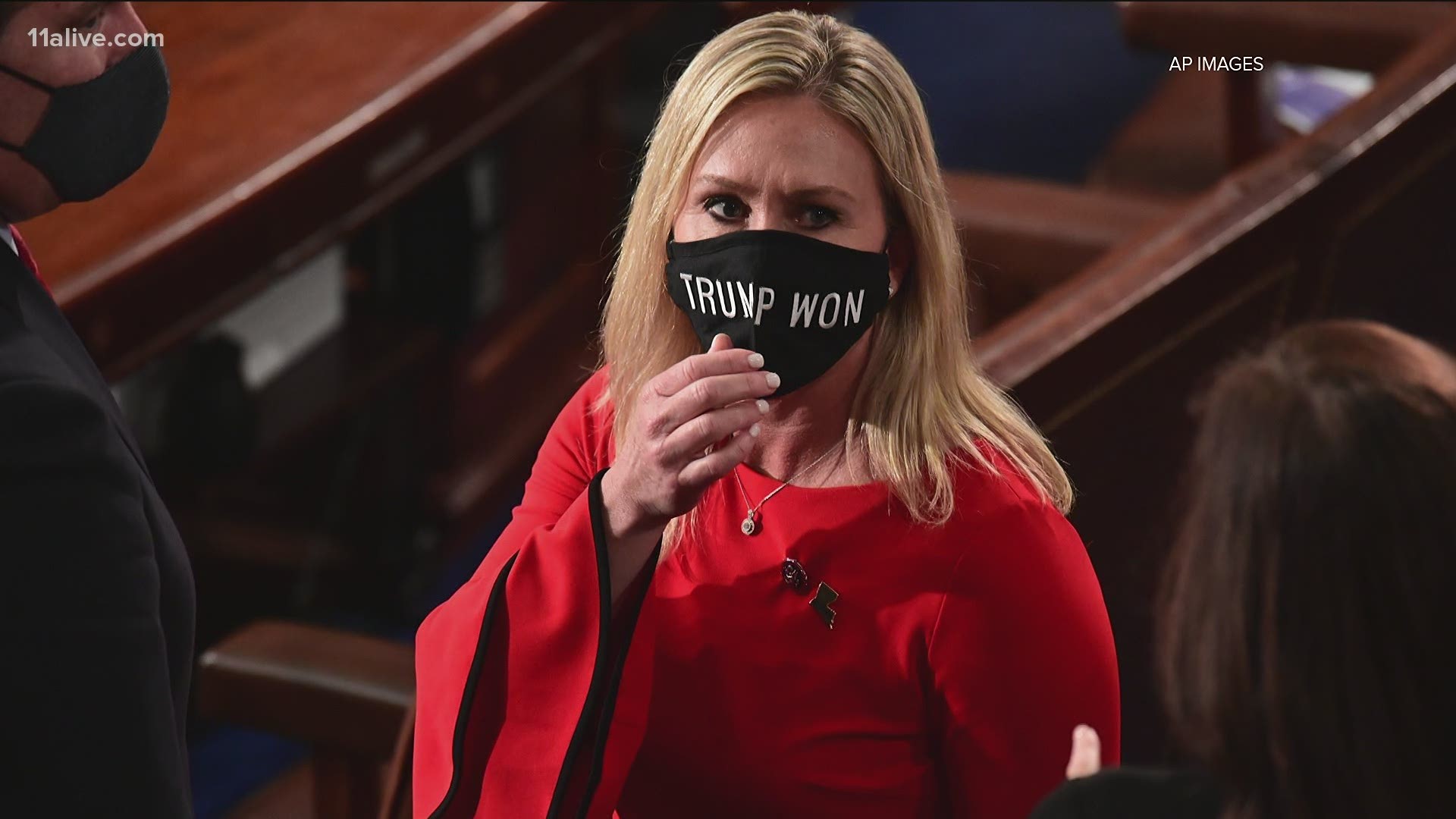 ATLANTA — Rep. Marjorie Taylor Greene has only been in office for a few weeks, but the Georgia congresswoman from the 14th District has already gained a degree of notoriety.

She is a vocal supporter of the QAnon conspiracy theory. She continues to spread unproven claims of election fraud in connection to the 2020 presidential election.

Her tweets on the election led to Twitter suspending her account for 12 hours earlier this month. Now she is being called out amid reports from CNN that she showed support for social media posts in 2018 and 2019 calling for violence against prominent Democrats, such as House Speaker Nancy Pelosi, former Secretary of State Hillary Clinton, and former President Barack Obama.

On Wednesday night a reporter and photographer with the NBC affiliate in Chattanooga were threatened with arrest after asking Greene a question a town hall event the congresswoman held in Whitfield County.

The television crew were invited to attend but wound up being escorted out by Whitfield County Sheriff's deputies at the request of Greene's staff.

Greene has also signaled support for conspiracy theories about mass school shootings and has liked social media posts that claimed tragedies such as the shooting at Sandy Hook Elementary and the Parkland, Florida massacre were "false flags," or in other words staged events.

She posted video in March 2019 from her own YouTube channel showing her chasing down and confronting Parkland survivor-turned-gun control activist David Hogg.

In the video, she called Hogg "sad" and a "coward." The 2018 school shooting resulted in 14 of his classmates being killed.

Hogg discussed the encounter this week with CNN.

"She talks as well about, you know, saying that she's an American citizen almost as if --implying I'm not just as American as she is or any of us aren't -- simply for not wanting our friends to die anymore," Hogg said. "That's just horrific and disgusting."

Greene's promotion of conspiracies has led to questions about whether she should serve on the House Education and Labor Committee, which plays a role in dealing with school safety issues. House Speaker and Democrat Nancy Pelosi joined the crowd Thursday questioning the assignment.

Greene's history has led to an announcement by Rep. Jimmy Gomez (D-Calif.) on Wednesday that he will be filing a resolution next week calling for the Georgia representative to be expelled from Congress.

Historically only five members of the House of Representatives have ever been expelled. Representatives John B. Clark, John W. Reed, and Henry C. Burnett were all expelled in 1861 for fighting for the confederacy.

In 1980 House members gave Michael Myers the boot after he was convicted of bribery. In 2002, James Traficant was kicked out of the House after being convicted of conspiracy to commit bribery and other crimes.

"It is not a requirement that the House member be convicted of a crime or even engaged in criminal conduct, but that is exactly what has happened in t he past," said 11Alive legal analyst Page Pate.

RELATED: What is the 'Disqualification Clause,' and how can it be used against members of the House and Senate?

Pate believes Greene being expelled is unlikely because Greene hasn't been convicted or even accused of a crime, which is currently the historic standard for expulsion.

The requirement is also a high bar. A supermajority, or two-thirds, of the house members, must vote in favor of expulsion for it to pass. Currently, that would require every House Democrat, plus more than 60 of Greene's fellow Republicans.

"It is a very rare type of discipline," Pate said. "I don't expect it to get to that stage. What is a lot more likely to happen is censure."

The Constitution allows the House to expel a member for 'disorderly behavior,' and it can also censure a member. When a member is censured it means the House is declaring 'deep disapproval' of the member's actions. Censure also only requires a simple majority.

Since Democrats currently control the House, they could censure Greene and wouldn't need the support of any Republicans.

If censured, the representative remains in Congress but stands on the House floor as the Speaker of the House reads the order of censure.

This last happened in 2010 to Rep. Charles Rangel of New York for "Misuse of congressional letterhead for fundraising; impermissible use of rent-controlled facility for campaign headquarters; inaccurate financial reports and federal tax returns," according to the House of Representatives.

"There have been a lot of scandals in Congress over the last 40 years, only two of them have resulted in an expulsion," 11Alive political analyst and Republican strategist Mike Hassinger said.

Hassinger believes at most Greene is on her way to be censured, but not expelled.

NBC News reports a spokesman for Republican and House Minority Leader Kevin McCarthy of California finds Greene's remarks to be "deeply disturbing," and he "plans to have a conversation" with her.

Hassinger said it is still too early to know whether the Republican party will attempt to distance itself from Greene as she would need to show she is a liability, something that may not be known until any re-election bid in two years.

"They're going to start paying attention when she either costs voters or donors and so far neither one of those things has happened."

11Alive reached out to Greene with questions about her history on social media and her controversial activity online, as well as to ask for her response to Rep. Gomez calling for her expulsion.