The former Tampa Police Chief sat down with 10News for her first interview as Mayor-elect of Tampa. 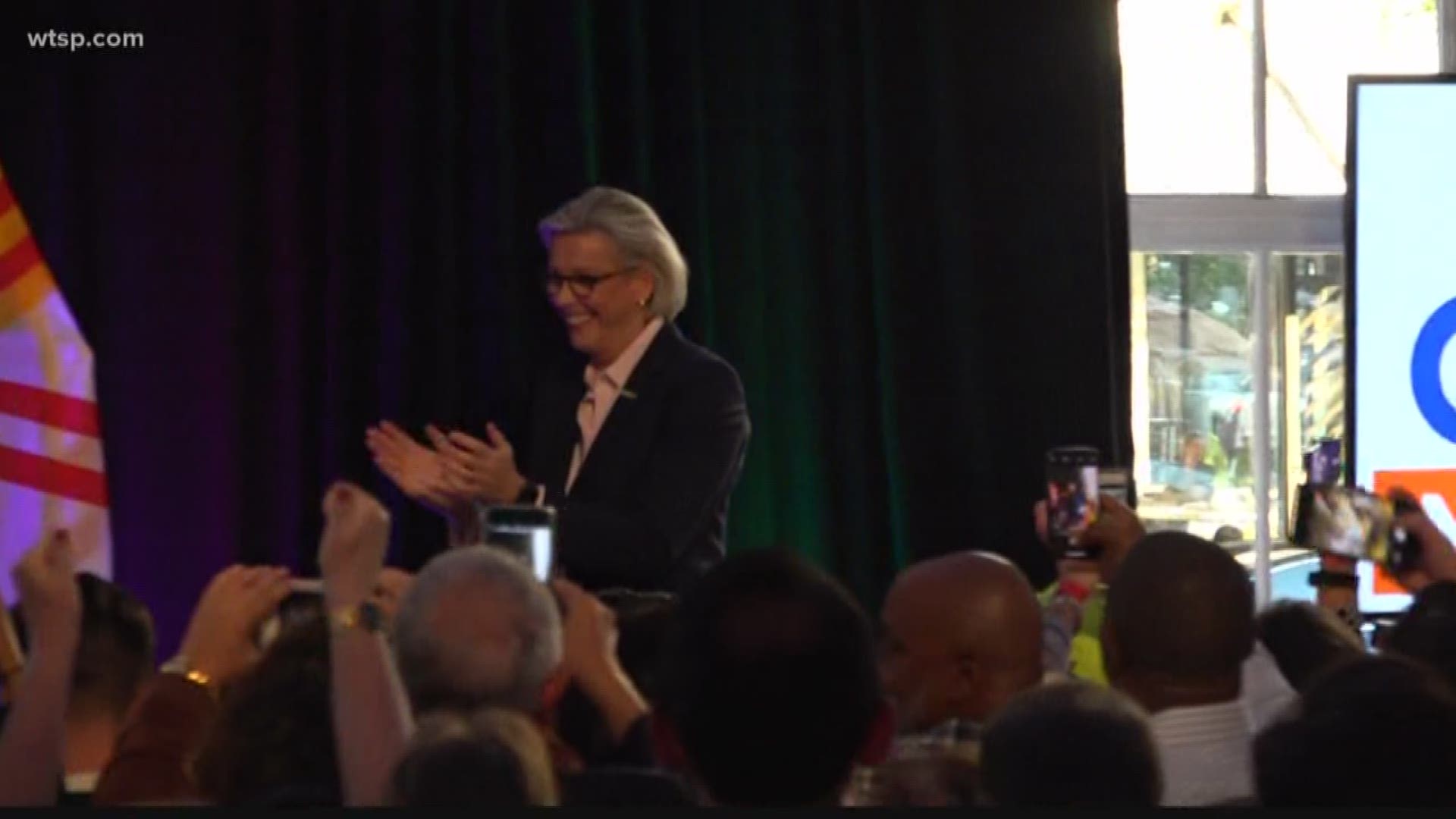 TAMPA, Fla. — Jane Castor will be Tampa’s next Mayor. The former Tampa Police Chief won a resounding victory over her run-off opponent David Straz by a 73% to 27% margin.

So, what was Jane Castor’s first order of business the morning after becoming Tampa’s Mayor-Elect? Well, she sat down with 10News WTSP Reporter Eric Glasser. Here’s some of that interview:

Q: Political experts say election and campaign strategists we’re keeping an eye on this race to see what strategies might be effective in our region during the 2020 presidential race. What do you hope they learned?

A: “I hope they learned that negative campaigning does not work. I hope that it wouldn’t work nationwide. I think the people of the nation are just like Tampanians who want to hear from a leader. They want to know what your vision is for the community, and that you are going to focus on the issues that matter to them.”

Q: Just about every headline says something to the effect of “Jane Castor soundly defeats David Straz, becoming Tampa‘s first openly-gay mayor.” How do you feel about that being mentioned? As opposed to just – “Jane wins.”

A: “You know, we will reach a point where, “Jane wins“, will be the title. But that’s something that I’m used to. The same sort of statement was made when I was appointed as the police chief. It’s the first female police chief. And so, it’s fine with me. I always say that at the end of my tenure I want to be remembered as a good mayor. Not the first gay mayor. But that said, the significance of being the first is not lost on me. You know, being a role model for other young people out in the community is something that I take very seriously.”

Q: How much work do you think you still need to do within the African-American community?

A: “I feel that I’ve always been a part of every community, every neighborhood in our city. And, especially in the African-American communities, you know, I’ve worked there for well over 30 years. I will be out in the community. I will be visible. I will be there for the people. I will show them through my actions, day by day, that I am going to be the mayor for everyone in our community. And, I think that actions speak a lot louder than the words, and that’s what I will do. I will just be out in the community being that example every day.

Q: Some have expressed concern that you are in the pocket of big developers and will rubberstamp a greenlight projects for those who supported you during this campaign. What’s your response to that?

Q: As a progressive, what about your ability to work with a conservative governor and state legislature?

A: “The governor has come towards the middle. But, it’s my job to represent the people of Tampa. The citizens of Tampa. And, I am anticipating that I will work towards a very good relationship with our governor and with the legislature. Whatever I need to do to ensure that we get things done here in Tampa. And I am looking forward to it.”

Q: What, if anything, about the city would you like to take in a markedly different direction?

A: “I don’t know if there any specific projects that I would say that I would’ve taken in a different direction by virtue of Mayor Buckhorn’s incredible, successful developmental path for our city. That’s going to give me time to focus on the neighborhoods. And that’s going to be my focus, the neighborhoods. Looking at transportation, affordable housing, workforce development. Also, pay more attention to the environment. To have a resiliency and sustainability officer in my administration. And focus on the effects of climate change, and what we can do to reduce our carbon footprint here in Tampa. But, transportation, we’ve never lacked for good ideas. We have lacked funding. And now we’ve got the funding to put some transportation solutions in place.”

Q: Police shootings. The Super Bowl is coming. Storms threaten. It’s not all fun, as you know, being Mayor. But you feel you are uniquely qualified?

A: “I am uniquely qualified. Because all the things that you just mentioned, I have lead through as a police chief. And I am fully cognizant of the fact that it’s not all sunshine and roses every single day. And I believe that is why a lot of citizens and Tampa voted for me. Because I have been tested. In the toughest of times.

Q: We’re running out of time. So, lightning round. What your favorite food?

A: “Blue.” (Should have seen that one coming)

Q: What would you consider your potential biggest accomplishment as Mayor?

A: “My children will be my greatest lifetime accomplishment. But I would say as far as Mayor is concerned, if at the end of my tenure we have great transportation in place that connects all of our neighborhoods and we have been able to make great strides in affordable housing, workforce development, the environment - to be able to really make progress in those areas will be wonderful.”

Jane Castor will be sworn-in on May 1st.