How could some of President Biden's top campaign promises impact Florida?

The president has a long list of promises to make good on, and some may affect the Sunshine State. 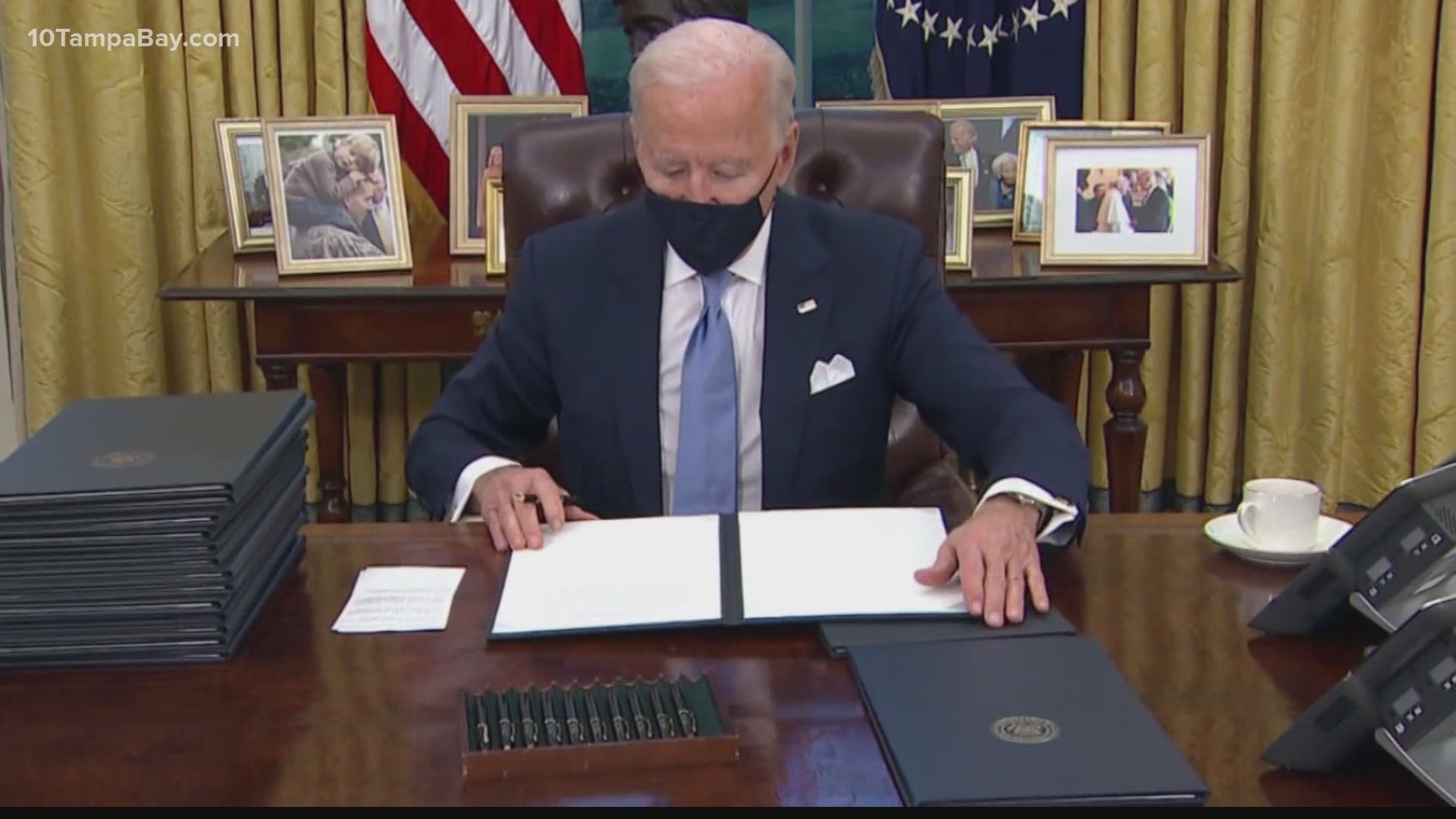 WASHINGTON — On the campaign trail, candidates are only as good as the promises they make. Months of debating and defending proposed policy ideas culminate with an election night - when voters choose the man or woman they believe can follow through on all the promises they've made.

For President Joe Biden, that list is pretty long.

From getting ahold of the ongoing coronavirus pandemic to addressing systemic racism to tackling climate change, Biden has cast his net of responsibilities pretty wide.

PolitiFact's promise tracking scorecard has dozens of promises Biden made while campaigning for president, and a meter to show which ones he's made, broken or compromised on.

Former President Trump had the same scorecard during his presidency. The website shows he managed to keep 24 percent of the promises he made as a candidate, and broke just over half of them.

After just one day in office, Biden has managed to keep 3 percent of his promises, while 2 percent are "in the works," according to the website.

But, out of all the promises the president has made, a pair of them may have a direct impact on Florida.

One of the first issues Biden will have to tackle as president is getting the current coronavirus pandemic under control.

He's promised to speed up the process of vaccinating people by distributing 100 million vaccines for 50 million Americans in his first 100 days in office. In order to do this, Biden has suggested using the Federal Emergency Management Agency and the National Guard to set up federally-run clinics in states across the country.

The strategy differs from what the Trump administration had been doing for the last month, giving states doses and allowing them to decide how to distribute them.

Florida is the state with the third most vaccinations in the country, but the process of vaccinating people who live here has been slow and frustrating for many. The head of Florida's Division of Emergency Management tied issues with the rollout to a lack of supply from the federal government.

Earlier this week, Florida Gov. Ron DeSantis flat-out rejected Biden's plan, saying it would not work in Florida. He stated that more bureaucracy would just create an even larger mess.

Rejoining the Paris Climate Agreement and net-zero emissions by 2050

Of the 17 executive orders Biden signed in his first night in office, one of the first was a promise he made early in his campaign, rejoining the Paris Climate Agreement.

The U.S. was originally brought into the agreement by former President Barack Obama in 2016. But, as soon as President Trump took office the following year, he promptly pulled the country out.

Under the agreement, participating countries must do their part in reducing emissions in order to keep the global temperature at 1.5 degrees Celsius, compared to pre-industrial levels.

Since the U.S. has pulled out, its original targets have changed. Obama aimed to have emissions cut by over a quarter by 2025. However, Biden has taken a broader stance, aiming to reach net-zero emissions by 2050.

For Florida, a state that is seen as ground zero for sea-level rise and the impacts of climate change, the end goal could have positive results. The process of reaching that point is a whole other story.

Biden has said he plans on curbing methane pollution from oil and gas companies, which does not bode well for a state that was third in the country in gasoline consumption in 2018.

Florida will have to revamp its energy sector to meet those demands, which may start with harnessing its biggest asset by investing in solar energy. Only 2.7 percent of electricity in the Sunshine State comes from solar energy.

It won't be an immediate change, but with discussions of tax credits, government incentives, and a carbon fee, Florida companies may slowly start making the switch to more renewable energy sources.