On Friday alone, the dueling campaigns made a total of five stops in the state. 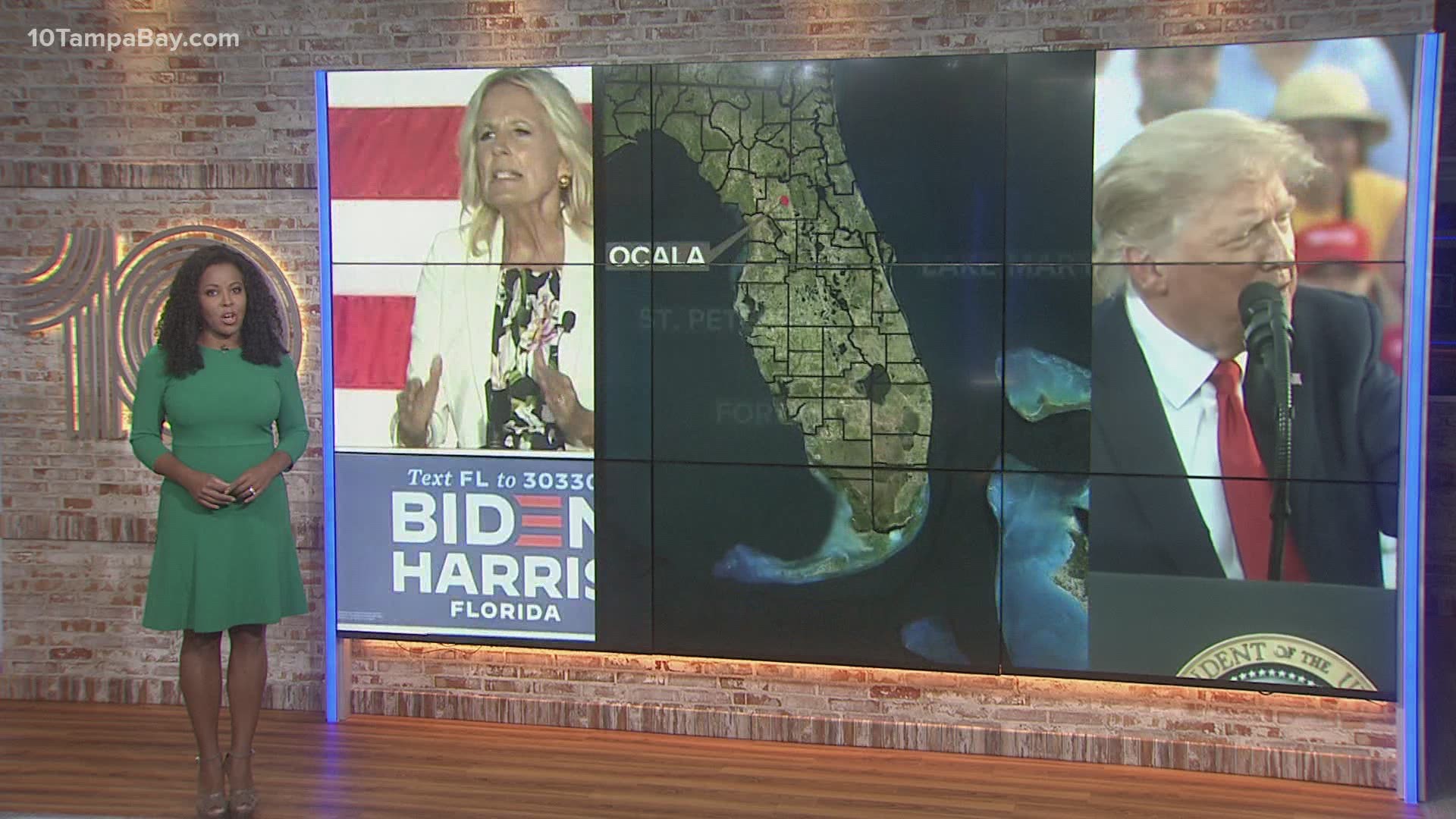 ST. PETERSBURG, Fla — Campaigning in the Sunshine State is heating up as both the Trump and Biden campaigns hold several events on Friday across Florida.

With Election Day only 18 days away, both presidential candidates and their teams know they're up against the clock. Especially as just over 2.2 million voters in Florida have already cast their vote via mail-in ballot.

The battleground state saw its share of events as the dueling campaigns made a total of five stops in the state, including some in the Tampa Bay area as Pinellas County found itself with a visit from Donald Trump Jr. and Dr. Jill Biden.

And, there's a reason for that. Pinellas County could determine if Joe Biden or Donald Trump wins the presidential election -- something it has since the 1980s excluding the 2000 election.

On top of that, Dr. Michael McDonald, a political science professor at the University of Florida and creator of The Elections Project says, "Pinellas has the largest percentage of their voters casting mail-in ballots for any county in the state of Florida."

Trying to keep up with all the action? Here's what has happened so far and what stops remain.

President Donald Trump held his first campaign event of the day in Southeast Florida. The Fort Myers stop marked the president's 14th visit to Florida this year, according to his campaign.

While in Fort Myers, Trump looked to rally voter support and highlighted his plans for seniors across the country, according to his campaign.

Next up was a "Make America Great Again" rally just a few hours north, spearheaded by the president's eldest son Donald Trump Jr. The Pinellas County stop is one of many for Trump Jr. as he pushes for his father's reelection across the state.

A Clearwater Quaker Steak and Lube was the backdrop for the rally as Trump Jr. discussed big tech, war and how his father's campaign is going to challenge "the norms" among other topics.

The president's second and final stop was to hold his own "Make America Great Again" rally at the Ocala International Airport.

President Trump, speaking to supporters, was met with chants of "four more years" as he compared his plans to what he believes the Democratic party would offer them. Topics the president touched on included seniors, big tech, the media, Supreme Court nominees, the Second Amendment and more.

Democratic presidential nominee Joe Biden's wife, Dr. Jill Biden, made her first stop in the state in Lake Mary to campaign for her husband's election.

Speaking at a "Women for Biden" event, she discussed the pandemic and the impact it is having on everyone's lives. She also shared with supporters that if Biden is elected president the nation would see a commander in chief that "brings out our best."

Dr. Jill Biden's final stop tonight was in where she will visit Pinellas County for a "Get Out the Vote Drive-in Rally" in St. Petersburg.

The premise for her visit was to "encourage supporters to make a plan to vote early and to join the campaign in getting out the vote across the state," according to a release.