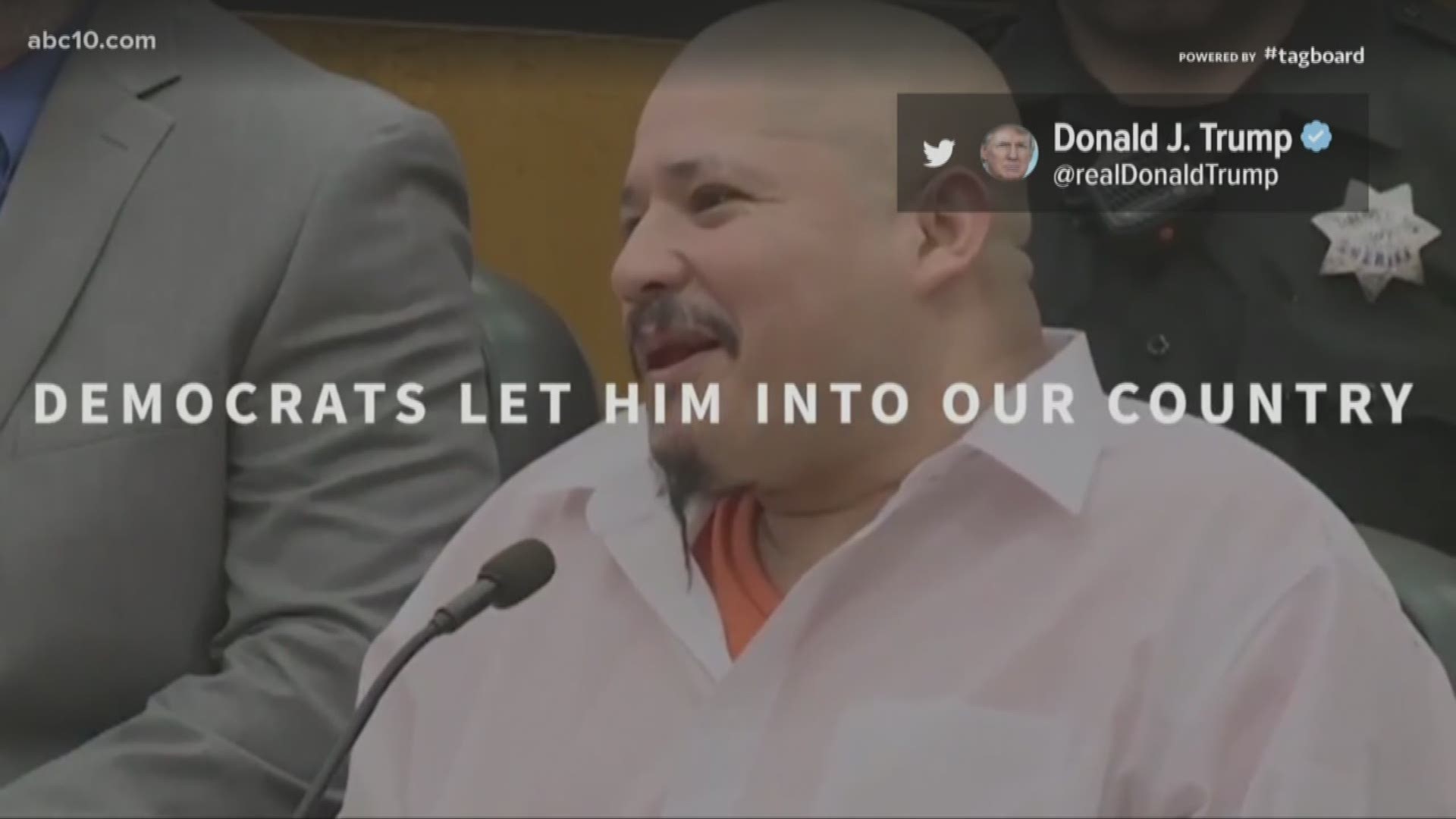 If you're viewing on the ABC10 App, tap here for multimedia.

Bracamontes was sentenced to death in March in the 2014 shooting deaths of Sacramento and Placer County sheriff's deputies Danny Oliver and Michael Davis Jr. Bracamontes​​​​​​​ was removed several times from court during the trial and sentencing for having repeated profane outbursts.

Trump's video showed several of Bracamontes​​​​​​​' outbursts with the words "Illegal immigrant, Luis Bracamontes, killed our people!" superimposed in bold letters at top. The video includes scenes of a migrant "caravan," warning, "Who else would Democrats let in?" Trump provides no evidence linking Democrats to Bracamontes.

It is outrageous what the Democrats are doing to our Country. Vote Republican now! https://t.co/0pWiwCHGbh pic.twitter.com/2crea9HF7G

Bracamontes​​​​​​​ was previously deported twice — once in 1997 after he was arrested in Arizona for possession of narcotics for sale, and a second time in 2001. It's unclear when Bracamontes​​​​​​​ returned to the United States after his second deportation, but federal authorities said during the trial that he had used at least two separate identities in the past.

Social media users were quick to note that the President's tweet targeting illegal immigrants failed to mention last week's mass shooting at the Tree of Life synagogue in Pittsburgh by a U.S.-born white supremacist, the man accused of sending bombs to Democrats and Trump critics, or the man who targeted and killed two African-Americans in Kentucky.

Response of @JeffFlake to this new Trump ad: “This is just a new low in campaigning. It’s sickening.” https://t.co/f6oyjId6O7

Many pointed out the ad's similarities to George H.W. Bush's presidential Willie Horton attack ad, while others criticized the president and Republicans of "fearmongering," calling the ad racist.

In 1988, the Bush campaign released an ad targeting his Democratic opponent then-Massachusetts Governor Michael Dukakis for a weekend furlough program which led to the release of a relatively unknown African American felon who went on to rape a white woman and stab her fiance.

The ad was immediately criticized for being racist, and although the Bush administration quickly backed away from it, it arguably turned the tide of the election, leading to a Bush win.

This may be the most desperate and vile ad since Willie Horton. Trump and Republicans don't want to talk about the fact that they plan to repeal the ACA, gut Social Security, Medicare, & Medicaid, and cut taxes even further for their donors, so they've resorted to fearmongering. https://t.co/xaXNThEOfb

as you recall, Bush campaign distanced itself from the Willie Horton TV ad

this is coming directly from the President of the United States

The video, which has been viewed more than 2 million times, is pinned to the president's twitter page, along with the message "It is outrageous what the Democrats are doing to our Country. Vote Republican now!"