St. Pete has organized several locations for people to drop off any dead sea life. 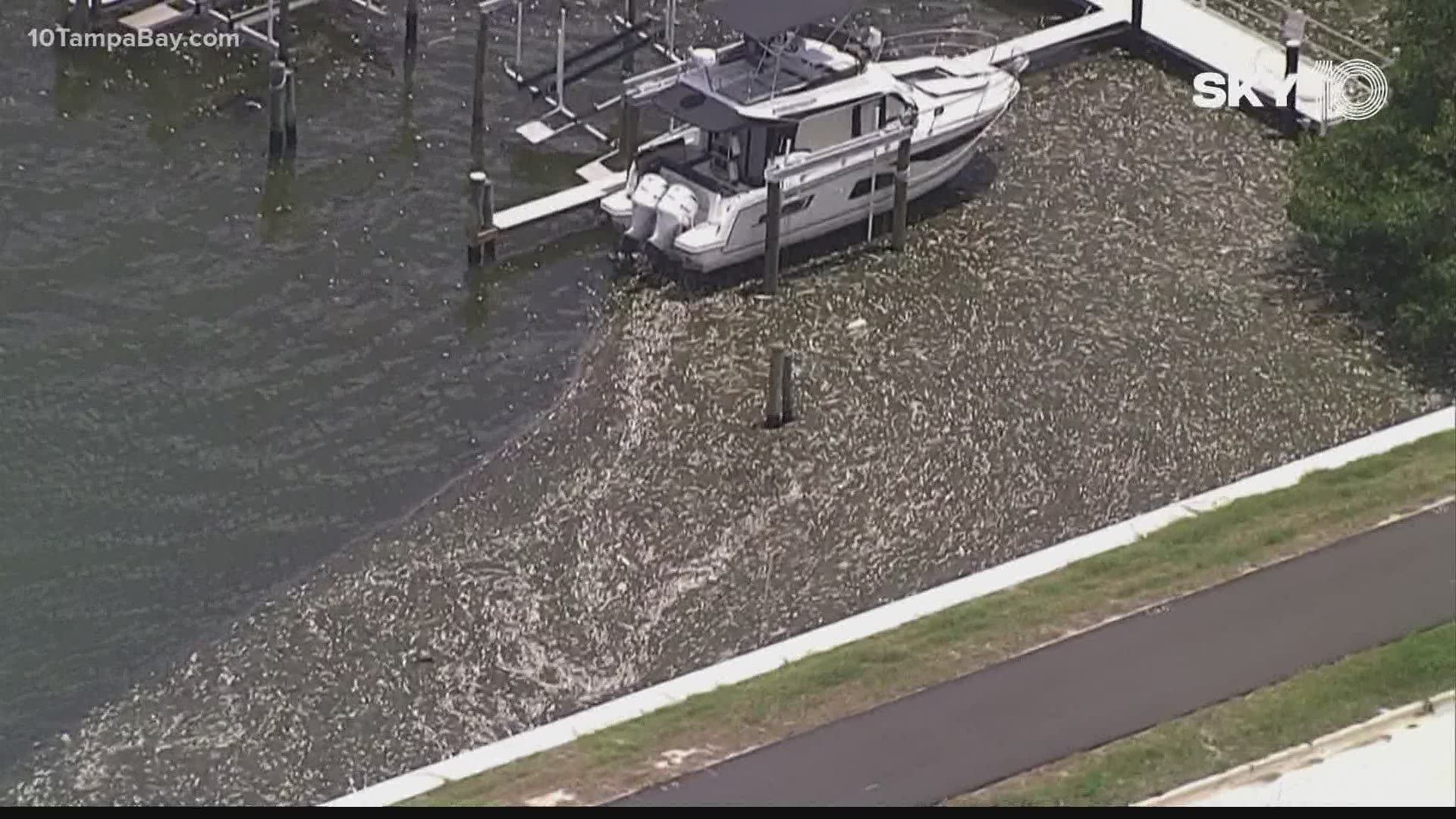 ST. PETERSBURG, Fla. — On Monday, more than 110 tons of dead sea life had been collected in St. Petersburg. Then by Wednesday, that number jumped to 676 tons, or about 1.3 million pounds around the Bay area, according to Pinellas County.

Around 124 tons of sea life were collected between Sunday and Monday with another 62.5 tons collected on Tuesday from Tampa Bay, Boca Ciega Bay and the Intracoastal Waterway, county leaders said.

Daily samples from the Florida Fish and Wildlife Conservation Commission show the red tide sweeping into Tampa Bay. The most recent samples show high levels of the harmful algae Karenia brevis near Indian Shores Beach, Vinoy Park, and Snake Key among others. People who live along the water in Coquina Key said they have never seen this many fish die because of red tide.

Pinellas County added that some parts of Tampa Bay tested 10 to 17 times higher than what is considered "high" levels of the organism.

Use the map below to see the latest red tide levels across Tampa Bay, according to FWC. You can also find where to drop off any dead fish.

In an attempt to slow the red tide bloom, the City of St. Petersburg's ban on fertilizer is still in effect until Sept. 30. City leaders say increased rainfall in the summer months can cause nutrients from fertilizer to reach water bodies and potentially cause algae blooms, fish kills, and water quality issues.

Heads up ‼️ Increased rainfall in the summer months can cause nutrients from fertilizer to reach water bodies and lead to environmental issues like algae blooms, fish kills + water quality problems. To prevent this, citywide fertilizer ban is still in effect until Sept 30. pic.twitter.com/tFkQOzPPIR

The Ocean Circulation Group at the University of South Florida is also collecting samples throughout the Tampa Bay area and forecasting trajectories of the red tide. Data from the samples for July 12-16 show high levels of algae traveling further into Tampa Bay, concentrating along some of the shorelines.

As the cleanup continues, the City of St. Petersburg has several locations for residents to drop off any dead sea life collected. You can also report a fish kill or red tide here.

Red tide is the harmful algal bloom that produces toxic chemicals that can cause respiratory illnesses in people and even serious and sometimes deadly effects on marine life.

You can find tools to check for red tide in your area here.

RELATED: Expert says Elsa did not wash away red tide in Tampa Bay and could have made it worse

RELATED: Fried to DeSantis: Declare a state of emergency over red tide