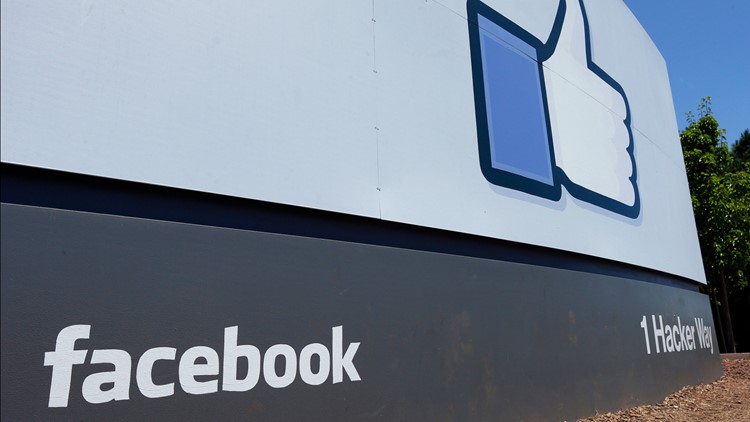 Photo by: AP
FILE- This July 16, 2013, file photo, shows a sign at Facebook headquarters in Menlo Park, Calif. Adam Pezen, Carlo Licata and Nimesh Patel are among the billions of Facebook users who use the site to keep up with friends. And like millions of others, the three men shared their own photographs and were "tagged" in other snapshots posted by friends, sometimes at the urging of the site's suggested tag feature.   But their Illinois addresses put the trio's names atop a lawsuit against Facebook and led to a landmark $550 million settlement last month. (AP Photo/Ben Margot, File)

HILLSBOROUGH COUNTY, Fla. — Social media can be both a happy and a dark place. People share parts of their day and major announcements on their profiles, but it is also where we have seen graphic and disturbing content shared.

According to a lawsuit filed in Hillsborough County Circuit Court, the job entails viewing videos, images and live-streamed broadcasts of violent acts including abuse, beheadings, racist violence and murder and removing it for violating the corporation’s terms of use.

But those who fill the role say that both Facebook and Cognizant are not doing enough to protect them from the trauma of viewing such images daily.

The lawsuit reads that both Jeudy and Garrett’s class-action suit is being filed to protect themselves and others "from the dangers of psychological trauma resulting from defendants’ failure to provide a safe workplace."

Jeudy and Garrett both claim that they have developed and now suffer from PTSD from their exposure to “highly toxic” and “extremely disturbing” images, witnessing multiple acts of “extreme and graphic violence.”

Jeudy specifically details the impact that having to view the live stream of the March 3, 2019, New Zealand mosque mass shooting numerous times had on him. He claims that after this event, Cognizant failed to provide trauma counselors on site.

RELATED: 49 killed at mosques in 'one of New Zealand's darkest days'

According to the lawsuit, Jeudy’s incident was not the only time the corporations failed to provide mental health support and meet workplace safety standards.

There is also mandatory counseling, mental health support and alterations to the content’s audio, resolution, color etc. that the suit alleges are supposed to be in place, but are not.

As self-proclaimed first responders of the internet, these content moderators often are the first to see emergency situations and report them to local law enforcement agencies and feel as though they should receive the same protections as other first responders.

They are seeking workers' compensation and health coverage for the PTSD caused by their working conditions.

Something that first responders here in Florida did not receive until 2018 when -- governor at the time -- Rick Scott signed SB 376 extending workers' compensation benefits to first responders dealing with PTSD.

Prior to this law, first responders were only granted workers' compensation benefits for physical injuries.

It also requires that employing agencies of these professions and volunteer first responders must provide educational training related to mental health awareness, prevention and mitigation treatment.

Those involved in the suit are seeking damages in the excess of $30,000 and demanding a jury trial.

They also are asking that both corporations: stop their “unlawful” and “unsafe” workplace practices, establish a fund for testing and providing mental health treatment to those impacted and provide compensation for the lost wages and medical-related expenses incurred.