The federal judge wrote in Wednesday's ruling that parents should have pursued administrative claims before filing a lawsuit. 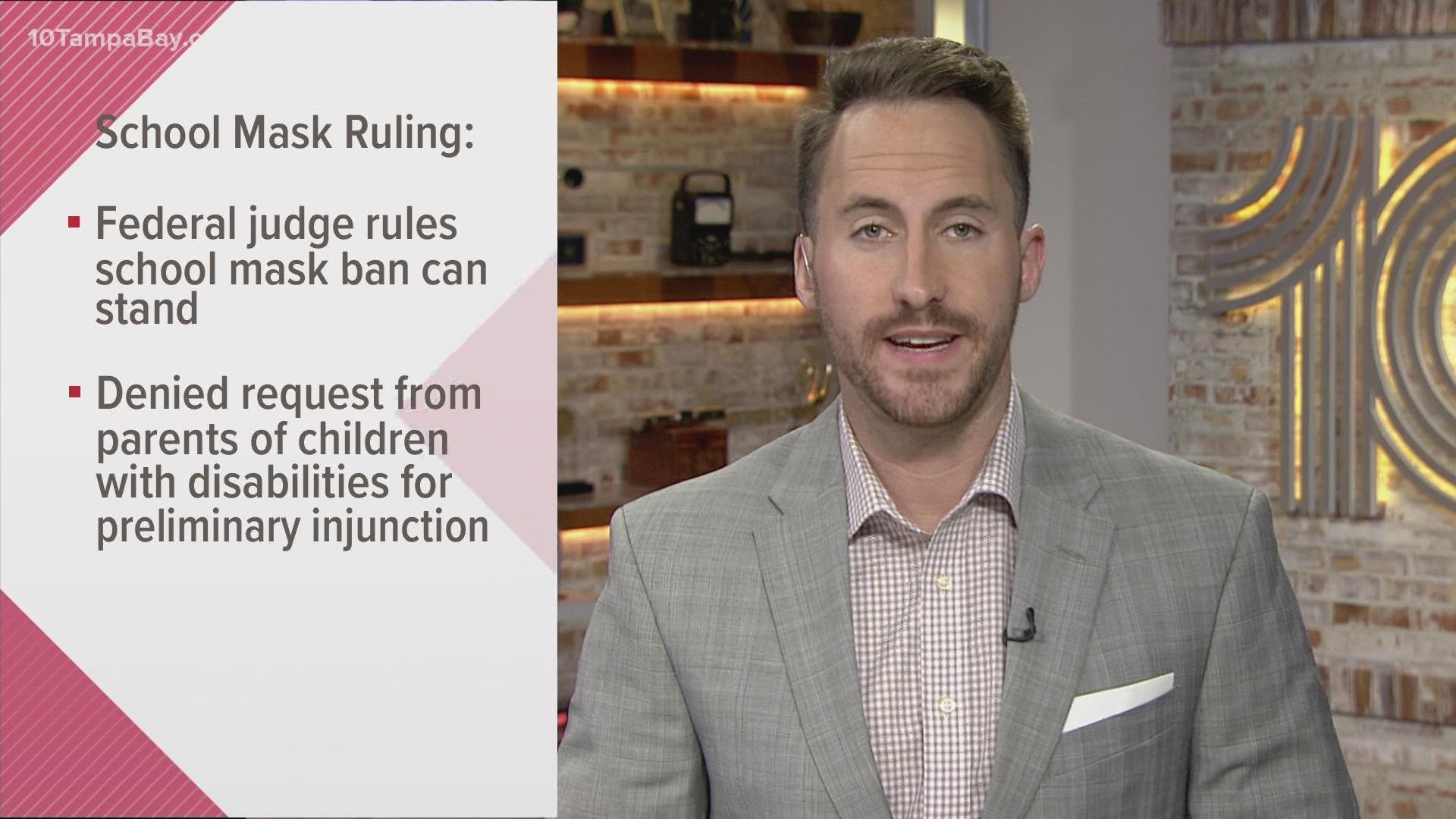 MIAMI — A federal judge has declined to block a ban imposed by Republican Gov. Ron DeSantis to prevent mandating masks for Florida school students amid the ongoing coronavirus outbreak.

U.S. District Judge K. Michael Moore in South Florida denied a request by parents of children with disabilities for a preliminary injunction against an executive order that DeSantis issued July 30 that served as the basis for the Florida Department of Health issuing a rule that required school districts to allow parents to opt out of any student mask mandates.

According to the 34-page document Moore issued, the federal judge said given the unique circumstances of each child, it would require unique solutions.

The court found that the parents who filed the suit would better benefit by pursuing administrative remedies that can provide tailored solutions to each child's individual needs rather than banning the executive order.

Moore continued to say that it's not even clear that the parents' requests in the lawsuit would alleviate many of the concerns raised in their affidavit.

In the lawsuit, court records say the "plaintiffs raise highly individualized concerns" including, mask-wearing during lunchtime, loose standards for medical exemptions from mask requirements, availability of counseling, the quality of virtual education alternatives and the absence of vaccine mandates.

Moore said given their individualized concerns, "how would an injunction against Executive Order 21-175 solve these problems?" And stated the plaintiffs did not offer an adequate answer.

Moore wrote in Wednesday's ruling that parents should have pursued administrative claims before filing a lawsuit.

The ruling was a win for Gov. DeSantis who has been battling with local school systems, state and federal courts on whether or not children should wear a mask in school.

On Aug. 30, the Florida Department of Education announced the withholding of monthly schoolboard members' salaries in Alachua and Broward counties for requiring face masks without opt-out options.

Commissioner of Education Richard Corcoran made the announcement that day saying "each district has implemented a mandatory face mask policy that violates parental rights by not allowing a parent or legal guardian to opt-out their child, as required by Florida Department of Health Emergency Rule 64DER21-12."

RELATED: Judge to decide whether DeSantis can enforce mask mandate ban while ruling is being appealed