The governor said the next move will likely be to "just open it up to everybody," but he's still not sure when. 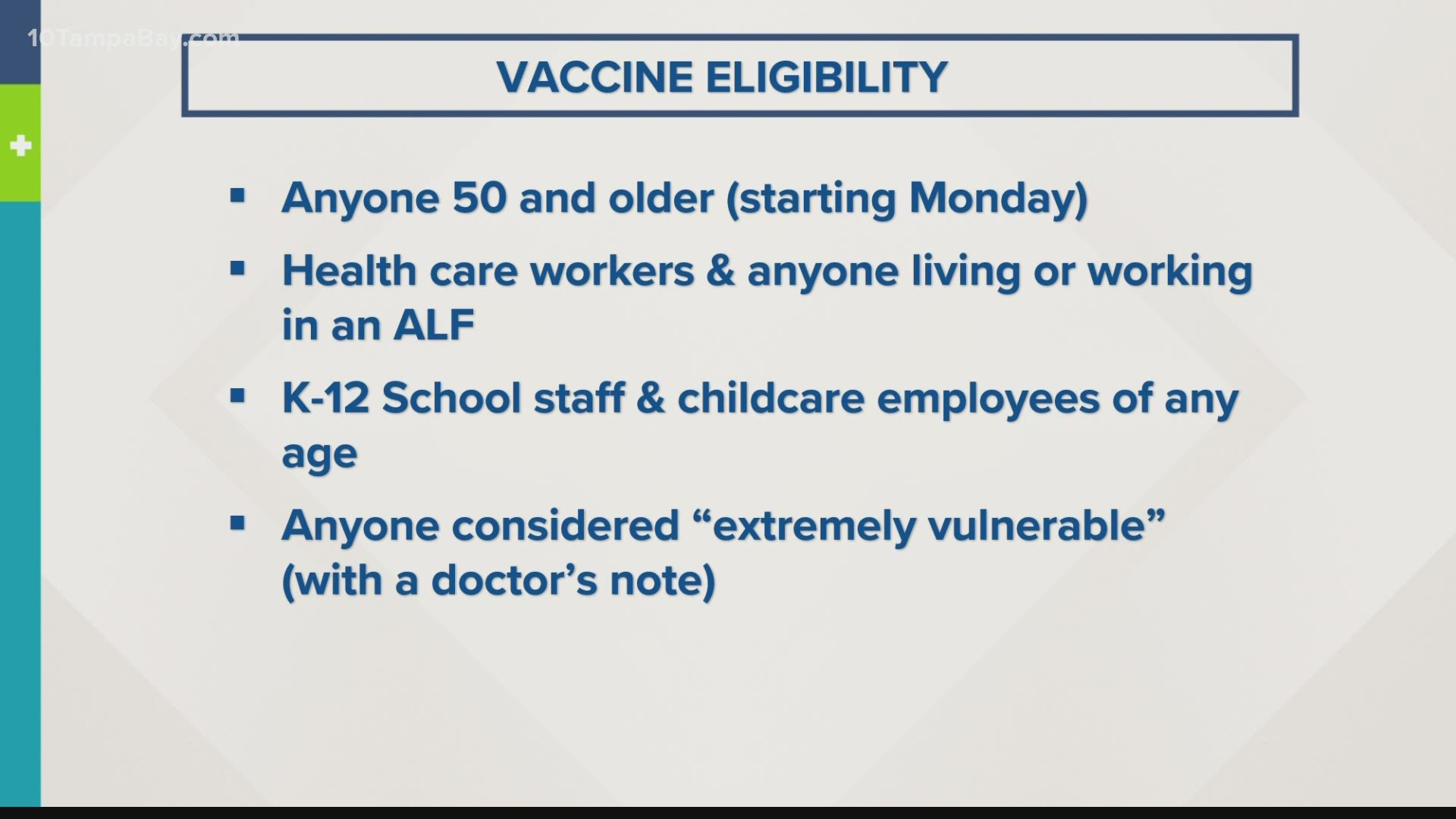 TALLAHASSEE, Fla. — Starting Monday, Floridians age 50 and older can book appointments to get their COVID-19 vaccine.

Gov. Ron DeSantis made the announcement Friday during a press conference at the Florida State Capitol with outgoing Division of Emergency Management Director Jared Moskowitz.

The governor said that Florida has seen success in expanding the eligibility age to 60 and up, so he's confident that it is the right time to lower the age to 50.

DeSantis said he thinks the demand will obviously go up but not enough to overwhelm the state's current vaccine supply.

The governor said that if the vaccine rollout to people age 50 and up goes well, the next move will be to make the vaccine available to everyone who wants it.

“I think our next move will most likely be to just say anyone who qualifies under the EUA” DeSantis said. “We probably could just open it up to everybody” The governor added that he doesn't know exactly when that will be, but it will definitely be before May 1.

Division of Emergency Management Director Jared Moskowitz spoke on the state's vaccination rollout approach and why he says “Florida has vaccinated more seniors than any other state."

Moskowitz said that Florida was one of the first states to start vaccinating seniors in long-term care facilities and to bring shots to people in their homes through the homebound seniors program.

The emergency management director also said that the White House has reached out to Florida, as the state has been "the model" for getting vaccines to people in underserved communities through offering shots at places of worship, like churches and temples.

When asked about the Orange County Mayor Jerry Demings lowering the age requirement at one vaccination site to 40 and up, DeSantis said "It’s not his decision to make." The governor said that trying to vaccinate "healthy 40-year-olds" over seniors is not the direction he would go.

Gov. DeSantis also spoke about people who have been able to get vaccinated by waiting around for leftover doses at vaccine sites, also known as "vaccine scavengers."

“If you open a vial and you have a shot and someone cancels an appointment, you put it in somebody’s arm," DeSantis said.

You can watch the full press conference below.

RELATED: Am I eligible to receive the COVID-19 vaccine in Florida?