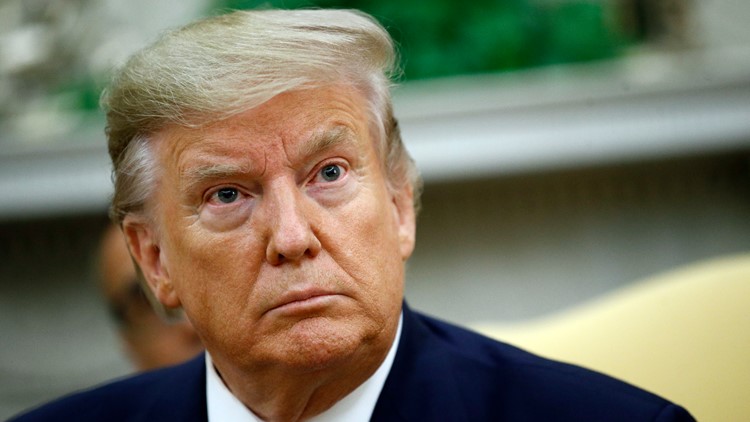 Photo by: AP Photo/Patrick Semansky
President Donald Trump listens as he meets with Bulgarian Prime Minister Boyko Borissov in the Oval Office of the White House, Monday, Nov. 25, 2019, in Washington.

PORT ST. LUCIE, Fla. — No one complained when Nelson Gibson brought an 8-by-10-inch portrait of President Donald Trump to his dialysis facility for emotional support.

And people kept quiet, WPBF-TV reports, when he had a miniature cardboard cutout in-hand.

Gibson's son, Eric, wanted to further help his father through the hours-long treatments, so he upgraded cardboard Trump to a life-sized version -- and that suddenly became excessive.

Last weekend, it was OK, and people loved it, Gibson told WPTV-TV. A few days later, it was not accepted.

"They told me it was too much and it wasn't a rally," Gibson said.

Officials at Fresenius Kidney Care say smaller items are acceptable for people to bring for support, much like the Trump picture or smaller cutout, but larger things could pose a problem.

Gibson said he feels singled out when other people bring items; Trump was propped against a wall and was not in anyone's way.

"While we cannot discuss any specific individual, we strongly support the ability of all our patients to express their views, which includes bringing reasonably sized items into our dialysis centers that do not create safety or infection control issues, or interfere with caregivers on the treatment floor," said Brad Puffer, a spokesperson for Fresenius Kidney Care, in a statement to WPTV-TV.