Attorneys general in 30 states and 4 U.S. territories sent a letter to Congress asking them to protect banks that work with marijuana businesses. 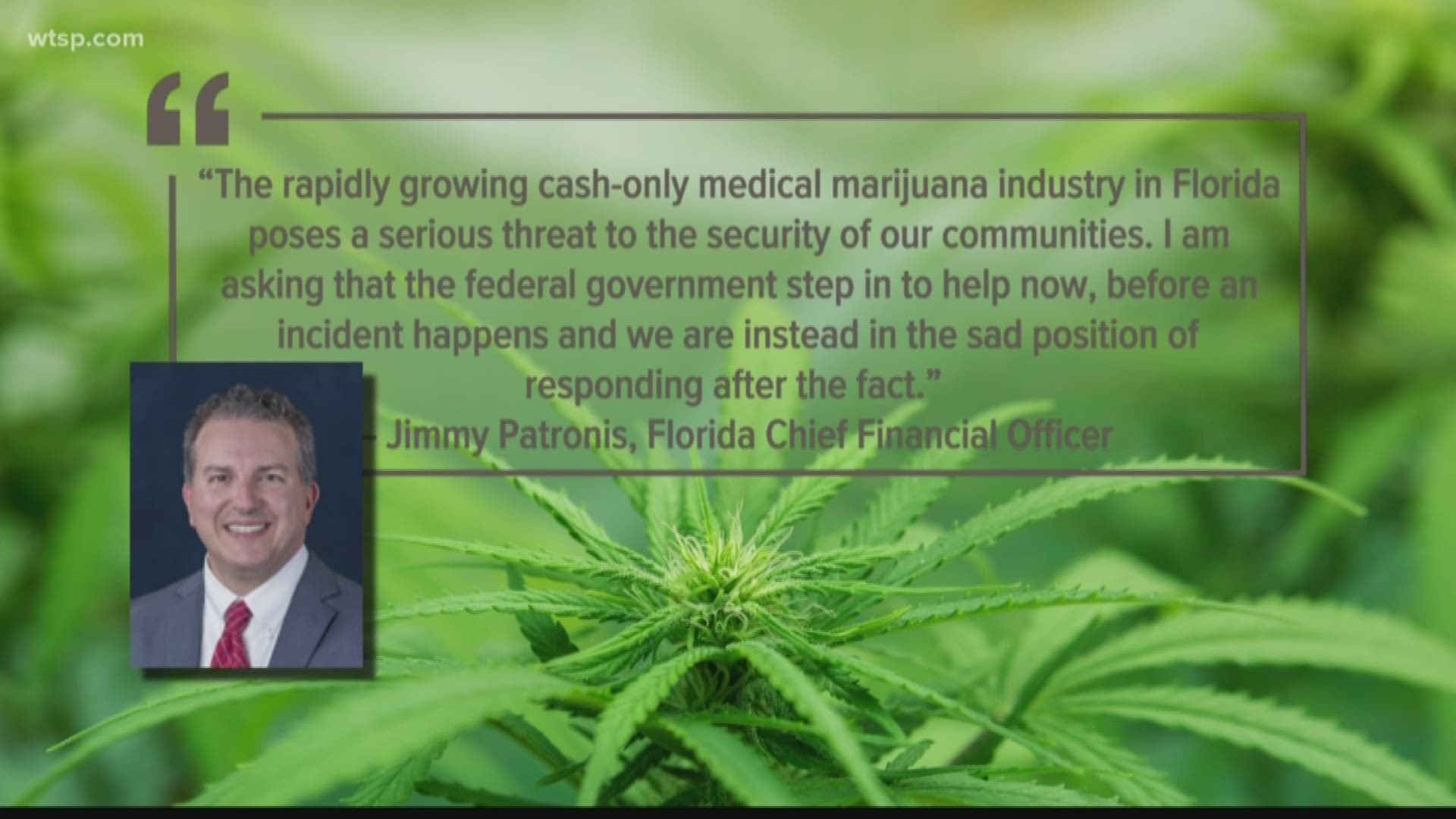 ST. PETERSBURG, Fla. — Attorneys general across the United States have joined together in urging lawmakers to pass banking reform legislation that would allow the banking industry to work with businesses in the legal marijuana industry.

Last week, attorneys general in 30 states and 4 U.S. territories sent a letter to Congress asking them to pass the SAFE Banking Act, or something similar, to protect banks that work with marijuana businesses. Florida Attorney General Ashley Moody was not among those who signed the letter.

“It is unfortunate that businesses operating legally in Florida are unable to open bank accounts and are being forced to rely only on cash transactions," a spokesperson for Moody said in a statement to 10News. "Our office is currently reviewing the legal implications of this request.”

That’s not to say Florida’s current administration hasn’t brought up the issue with federal officials. In February, Florida Chief Financial Officer Jimmy Patronis sent a letter to President Trump urging him to take administrative action to ensure that financial institutions won’t be penalized for banking with the marijuana industry.

Patronis included the following in his letter to Trump:

“We are now facing a tremendous safety threat as most dispensaries operating in our state are doing so as cash-only businesses. Most Florida banks and credit unions will not allow deposits from medical marijuana businesses because of the lack of federal clarity on cannabis banking. The rapidly growing cash-only medical marijuana industry in Florida poses a serious threat to the security of our communities. I am asking that the federal government step in to help now, before an incident happens and we are instead in the sad position of responding after the fact.”

The Executive Vice President of Government Affairs for the Florida Bankers Association, Anthony DiMarco, seems to agree with Patronis' sentiment.

“There are all sorts of potentials for using cash that are problematic to them,” DiMarco said. “(A) It’s unsafe for the marijuana folks to have all this cash lying around; (B) the government cannot track where these dollars have come from and where they’re going because it’s all cash; there’s tax implications maybe they’re not capturing.”

“We have bankers who want to get in it and they’re basically being told ‘no’,” added DiMarco. “Right now the federal law says marijuana is illegal and if you bank them you’re aiding and abetting, I can’t remember the exact legal term, in a criminal enterprise.”

One thing Florida cannabis businesses have going for them is the experience of the state’s Cannabis Director, Holly Bell. Appointed to the position earlier this year, Bell is a former banker who previously worked with a company in Colorado that connected cannabis businesses with financial groups.

“I am a long-time banker by trade and have thirty-some years of experience in the finance industry,” Bell told 10News in a February interview. “I worked with a group out of Colorado that are known to be pioneers, a credit union that have banked the industry and been very vocal about it, written books about it, and worked with them over the last year to develop some things with them. One of the things we found is, it’s not illegal or, you can bank the industry, you just have to do your due diligence and your research and understand the rules and regulations and how to comply.”

She added the potential dangers of dealing with controlled substances as well as the importance of understanding and learning the regulations behind them.

“Anytime you bank a controlled substance you learn the regulations, and believe me, when you can go to jail, possibly, because you are banking someone who is dealing with a controlled substance, you dive deep and understand the regulations in a lot of detail,” Bell added. “I may not have worked in that industry, but I have studied them and understand them so that I could learn how to bank with the industry.”

“The medical marijuana industry in Florida continues to grow rapidly and is expected to exceed $1 billion by next year. Legitimate Florida businesses in this industry face incredible security threats and increased opportunity for criminal activity at no fault of their own. I have been consistent in asking for Congress to step up and approve legislation which will increase banking options for our country’s marijuana businesses, and that has not changed.”