Marc Dobson started in Cocoa Beach and ended his major feat at the Florida State Fair.

TAMPA, Fla. — With his drum kit strapped to his back and a guitar in his hands, the One Man Band of Marc Dobson hit the road on April 13 to make his way to the Florida State Fair.

His goal? To walk the 120 miles from Cocoa Beach to Tampa all while performing along the way. But the action meant more to Dobson than keeping a beat. It meant helping others and getting the chance to set a record.

“The past year has driven us, mostly, stir crazy. Everybody can agree with that. So, instead of driving to the fair this year, like I do every year, I decided to walk," Dobson said.

As he marched to the beat of his own drum – literally – Dobson passed through places like St. Cloud, Davenport, Lakeland, and Plant City.

The walk was the brainchild of what Dobson calls having "a big head and a big ego" for wanting to join his fellow fair entertainers in setting records and his friend David Bradley's idea to start a foundation for entertainers impacted by the pandemic.

From that, the nonprofit called Entertainers Foundation, Inc. was formed to help performers in Central Florida.

“It’s to help entertainers who suffered, you know, being without work during COVID," Bradley said.

But it isn't for entertainers who might have just lost a few gigs during the pandemic, according to Dobson. The newly-formed foundation is to help those struck by tragedy and hardship get back on their feet.

“Most are struggling to come back, and they're slow in coming back in most sectors of entertainment," the entertainer of 30 years added.

Through the foundation, those who qualify will receive about a month's worth of their living expenses covered, which varies by person.

When the coronavirus pandemic struck, there weren't performers at local bars and people weren't attending concerts. Now, entertainment is slowly coming back.

Dobson's first thought after things shut down due to COVID surrounded the dollars and cents of it all.

"How am I gonna get through this game? You know, you just changed all the things," he said.

But about a month in, the One Man Band entertainer says some bright spots started to pop up during a year that took so much from his industry. He got creative and performed outside for senior living facilities, bar tailgates, and in neighborhoods as part of his "Social Distance Serenading" effort.

“Instead of you going out to a restaurant to see an entertainer, I went through the neighborhood," Dobson said.

At first, Dobson performed for the couped-up seniors for free, but then it became a type of gig for him during the pandemic in an effort to try to continue to make a living.

All in all, “COVID, it made me think about the numbers," Dobson said.

This brings us back to why this One Man Band hit the road in the first place – to help raise money and reach a lofty goal.

“It was really difficult,” Dobson said of his trek that consisted of walking eight hours a day with around 22 pounds of equipment strapped to him.

He says he experienced knee pain and the relentless Florida rain during his walk, but he kept on pushing.

“The rain was so hard that the rain on the road was getting splashed up, not just by the trucks but by the cars. They had reduced visibility and I had no sidewalk; I was on a two-lane road, and I had to stop, it was just too dangerous," Dobson said of his only setback while making his way to the Florida State Fairgrounds.

In the end, Dobson finished his feat and made it to the gates of the Florida State Fair where he was surprised with a $2,500 check for the Entertainers Foundation.

“The Florida State Fair is the first fair that I was at and I went ‘wow,’” Dobson said. "Seeing this fair run this year, it’s, you know, it’s awesome. Almost brings a tear to my eye.”

It's a place he's called home since 2009 when he used to perform with another act (he's been performing as the One Man Band since 2014) and it's his relationships at the fair and the smiles he puts on people's faces keep him coming back.

Anyone looking for assistance or to make a donation to the fund can go to marcdobson.com for more information. Dobson says entertainers who apply will need to provide proof and answer questions prior to qualifying. 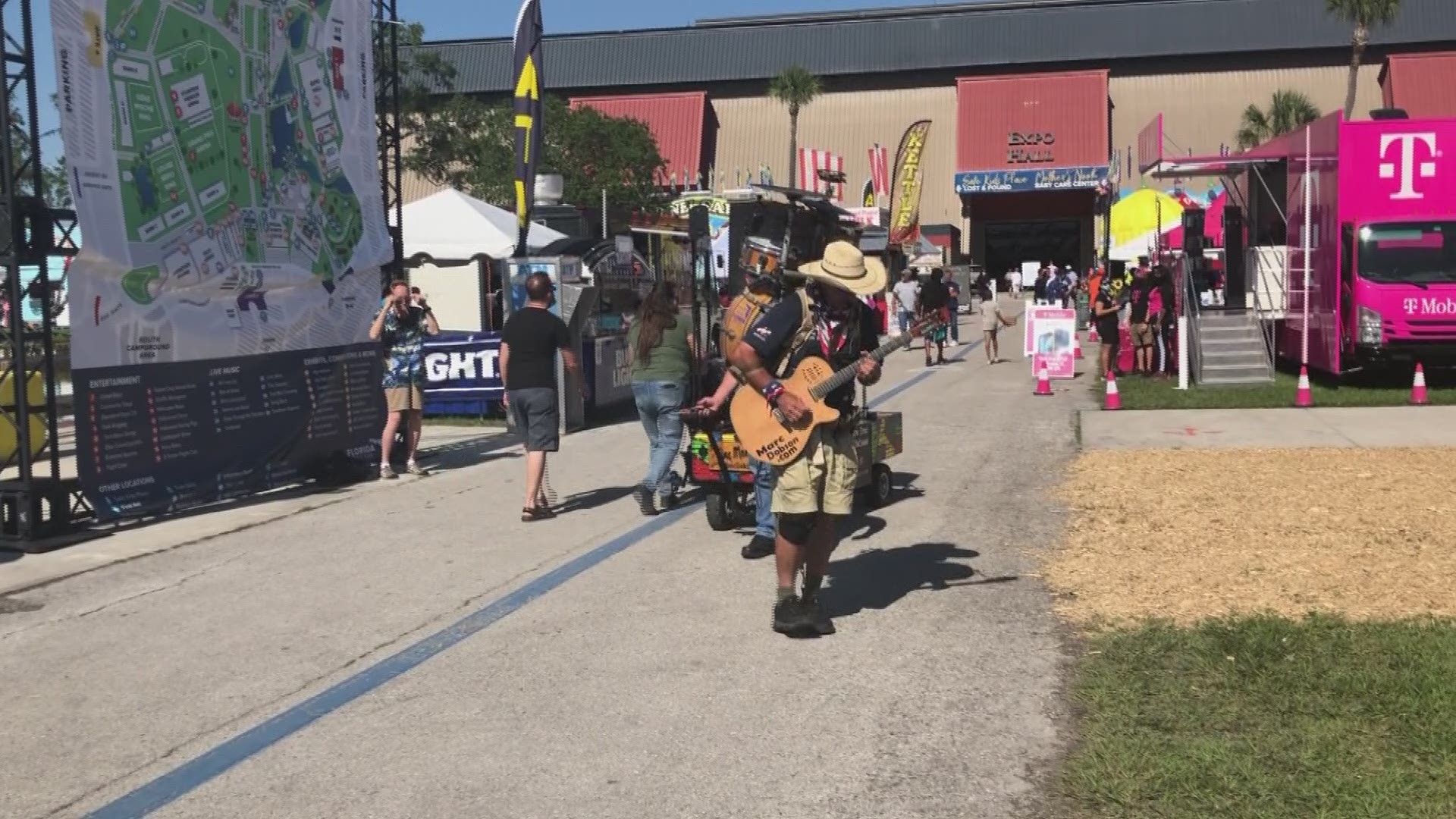 RELATED: Your guide to the 2021 Florida State Fair