TALLAHASSEE, Fla. — Three months after appointing a Palm Beach judge to the Florida Supreme Court, the high court ruled that Gov. Ron DeSantis exceeded his authority with the appointment.

On May 26, DeSantis announced two appointments to the Florida Supreme Court to fill two seats that had been vacant for a while. Both judges are from South Florida.

Judge Renatha Francis is the first Caribbean-American to be appointed to the state's high court. She is from Jamaica and had been serving on the 15th Circuit Court.

Judge John Couriel was also appointed that day. He was an assistant U.S. Attorney and had been an adjunct professor at Florida International University. He has already joined the high court.

Following the announcement, Democratic state Rep. Geraldine Thompson, who represents a large section of Orange County, filed a lawsuit saying DeSantis' appointment of Francis was not legal. Thompson claimed Francis had not been a member of the Florida Bar for at least 10 years, which is required to be eligible for the Florida Supreme Court.

The court ruled in favor of Thompson's claim, but it rejected her petition to have the Judicial Nominating Commission create a new list from an existing applicant pool and have the governor appoint another person from that list.

"There is no legal justification for us to require a replacement appointment from a new list of candidates, rather than from the one that is already before the Governor," the court wrote.

The court told Thompson to file a new petition, writing "the only legally appropriate and available remedy would be to require the Governor immediately to appoint a constitutionally eligible person from the JNC's existing certified list of nominees."

The court said Sept. 24 is the date Francis will have been a 10-year member of the Bar. She is ineligible to serve on the high court until that date. 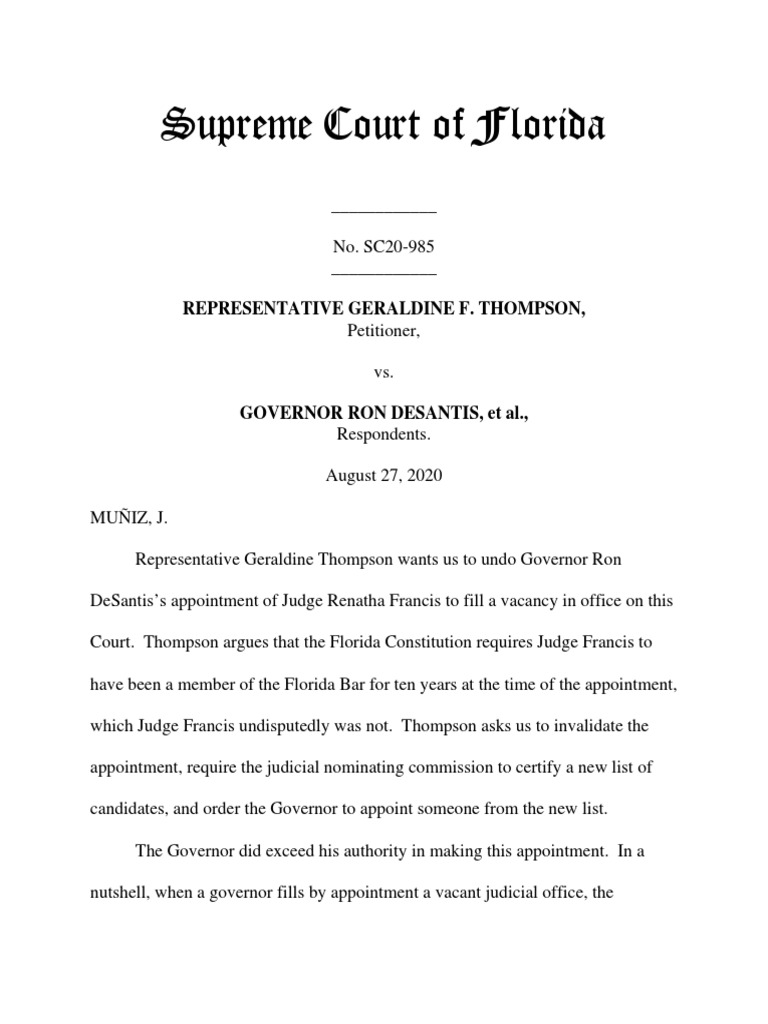 Florida Supreme Court rules on DeSantis appointment of judge | Mandamus | Supreme Court Of The United States
Petitioner, vs. Respondents. MUÑIZ, J. Court. Thompson argues that the Florida Constitution requires Judge Francis to have been a member of the Florida Bar for ten years at the time of the appointment, which Judge Francis undisputedly was not. Thompson asks us to invalidate the candidates, and order the Governor to appoint someone from the new list.