Although FEMA has extended its obligatory funding of six weeks to states, states need to meet certain requirements. Florida does not meet them. 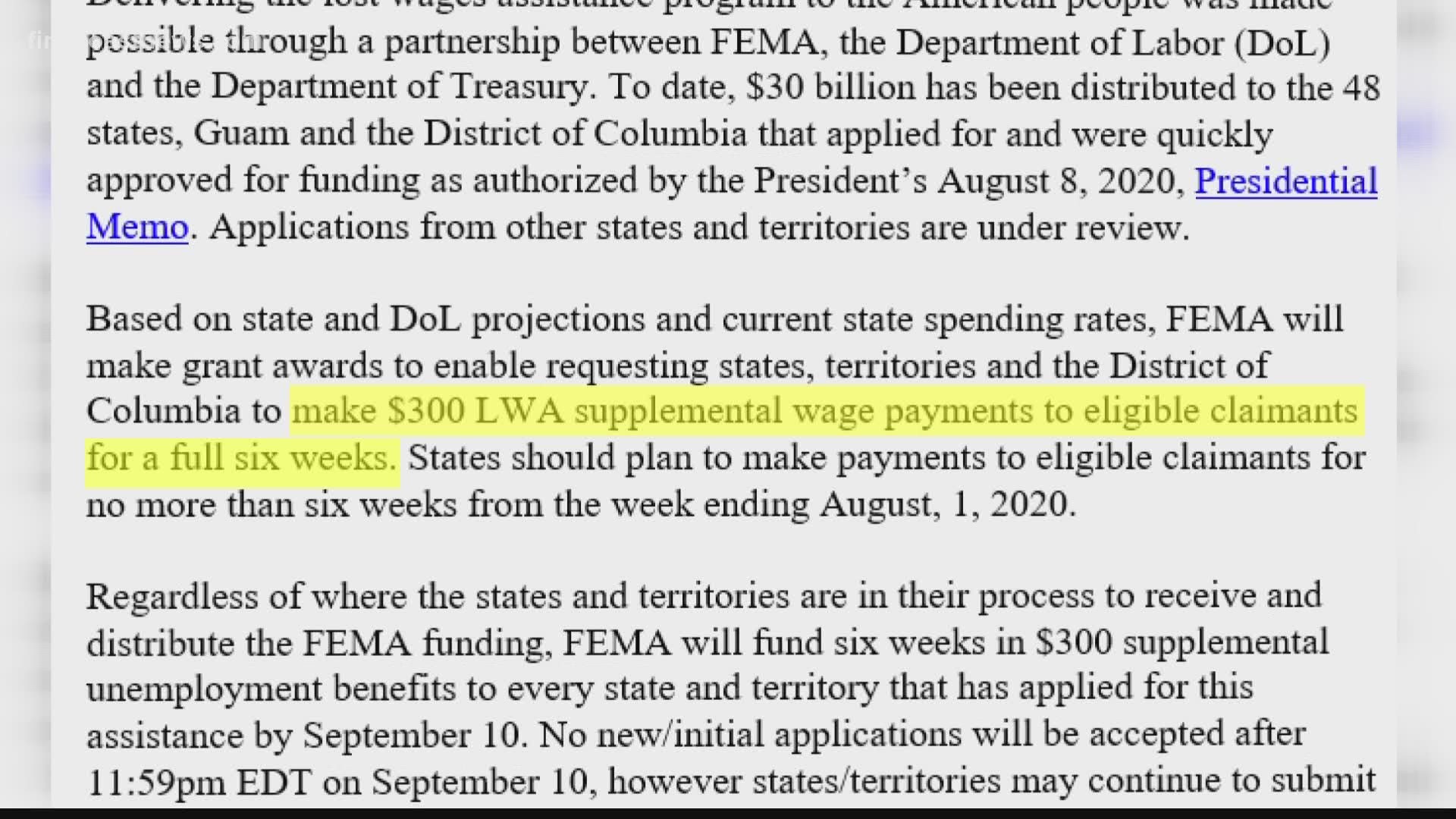 JACKSONVILLE, Fla — FEMA has announced that based on the Department of Labor’s projection, states will receive a total of six Lost Wages Assistance checks. At this time, Florida does not qualify for all of them because it is relying too much on the federal government to pay unemployment claims.

Although FEMA has extended its obligatory funding of six weeks to states, states need to meet certain requirements.

LWA provides a federal $300 payment per week to unemployed Americans. States had the choice to add an additional $100 in state money, but Florida did not choose to do so.

For states that opted out of the additional $100, they are required to be paying 25% of their total claims per week with state funds.

Florida does not currently meet that requirement.

The reason why other states qualify and Florida does not basically comes down to how many weeks states offer in unemployment benefits.

Florida offers 12 weeks, which is the lowest in the country. The nation’s average is 26 weeks.

“In May, April or March, when the bulk of things were closed and we needed it the most, this where the clock started ticking and the 12 weeks are done,” said state senator Jason Pizzo.

So although FEMA confirmed, and news reported 6 weeks of availability.....Florida may not be able to participate. Awaiting word from @GovRonDeSantis on whether they’ll extend or scrape together the $$$. Sorry for the tease. https://t.co/79zI2NQmaZ

By now, the majority of unemployed Floridians are utilizing federal programs like PUA and PEUC to extend unemployment benefits.

“It’s clear to me that we never invested in safety nets,” said state representative Anna Eskamani. “We are so reliant on the federal government to keep unemployment going, that without it, Floridian’s right now would have no unemployment at all.”

Eskamani and Pizzo said there’s a clear solution to this.

“If we were to extend the amount of weeks Florida is paying out right now, that could be one easy way to receive these additional dollars,” Eskamani said.

“The state unemployment trust fund so to speak has enough money in the trust fund,” Pizzo said.