Overpaid unemployment? The DEO is asking Floridians to start paying that money back

More Floridians are getting notice from the state’s unemployment agency they were overpaid and must send money back. 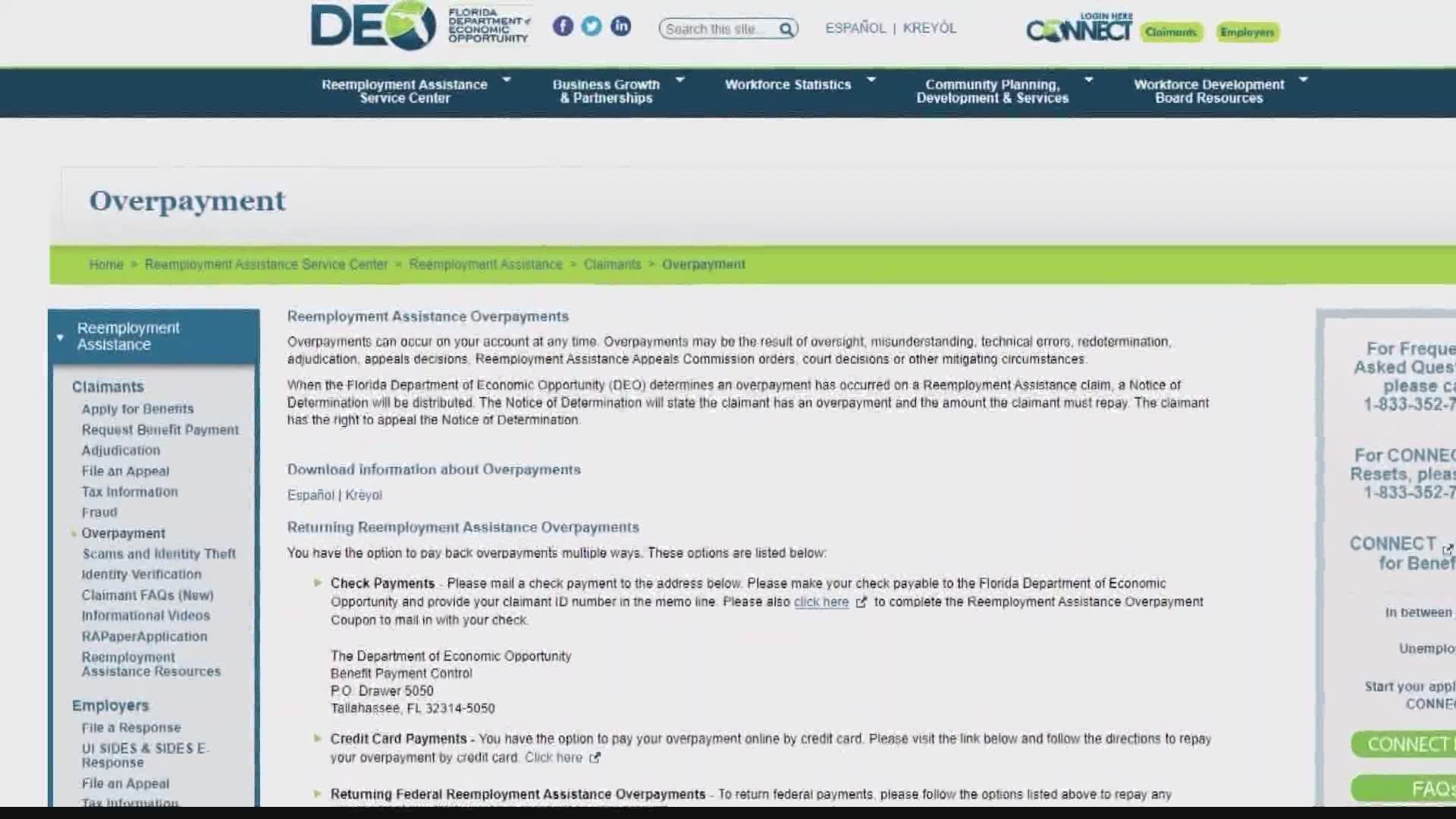 The self-employed insurance saleswoman says she eventually got her application straightened out. She was first approved for $125 weekly benefits.

“Then they went back and did another monetary determination on their own and determined I was eligible for $275 and that’s what I got paid on,” Tweed said.

But now months later, with Tweed back working, she says the Department of Economic Opportunity is claiming she was overpaid by $150 a week for nine weeks and owes $1,350 back to the state.

“After determining four different times that I was deemed eligible and this is how much we paid you and now several months later to come back and ask for the money, I think it’s wrong,” she said.

Tweed is one of many.

The DEO, which didn’t respond to emails from 10 Tampa Bay on Wednesday, has an entire page set up on its website where overpaid Floridians can pay that money back.

RELATED: Being overpaid by DEO? Here's what you should do.

What’s unclear is if there’s one common reason it’s happened so many times. In some cases, advocates believe it can be traced back to issues with backdated claims.

Last month, the Department Of Economic Opportunity tweeted about overpayments, saying they could be a result of a technical glitch.

Do you have an overpayment on your Reemployment Assistance account? Follow these steps to assist you in what to do next: https://t.co/MqjmLqWc7e pic.twitter.com/hyUutRsBB2

Rep. Anna Eskamani, D-Orlando, told people on a Facebook Live Q&A Wednesday evening that if they suspect they’ve been paid too much to wait until DEO reaches out first.

"I think it's important, as much as you can, to do your research to determine for yourself whether this number is accurate or not, and If DEO says you have an overpayment, contact a state lawmaker,” she said.

“Unfortunately DEO is processing things so fast, so the fact there are overpayments doesn't surprise me because I could see DEO making those mistakes."

The DEO’s website reads, "when the Florida Department of Economic Opportunity (DEO) determines an overpayment has occurred on a Reemployment Assistance claim, a Notice of Determination will be distributed"

A claimant can appeal if they disagree.

"I don't think anyone should have to pay it back when it's the DEO that made the error,” Tweed said.