Two men shooting at police were killed along with a bystander and the UPS driver, authorities say. 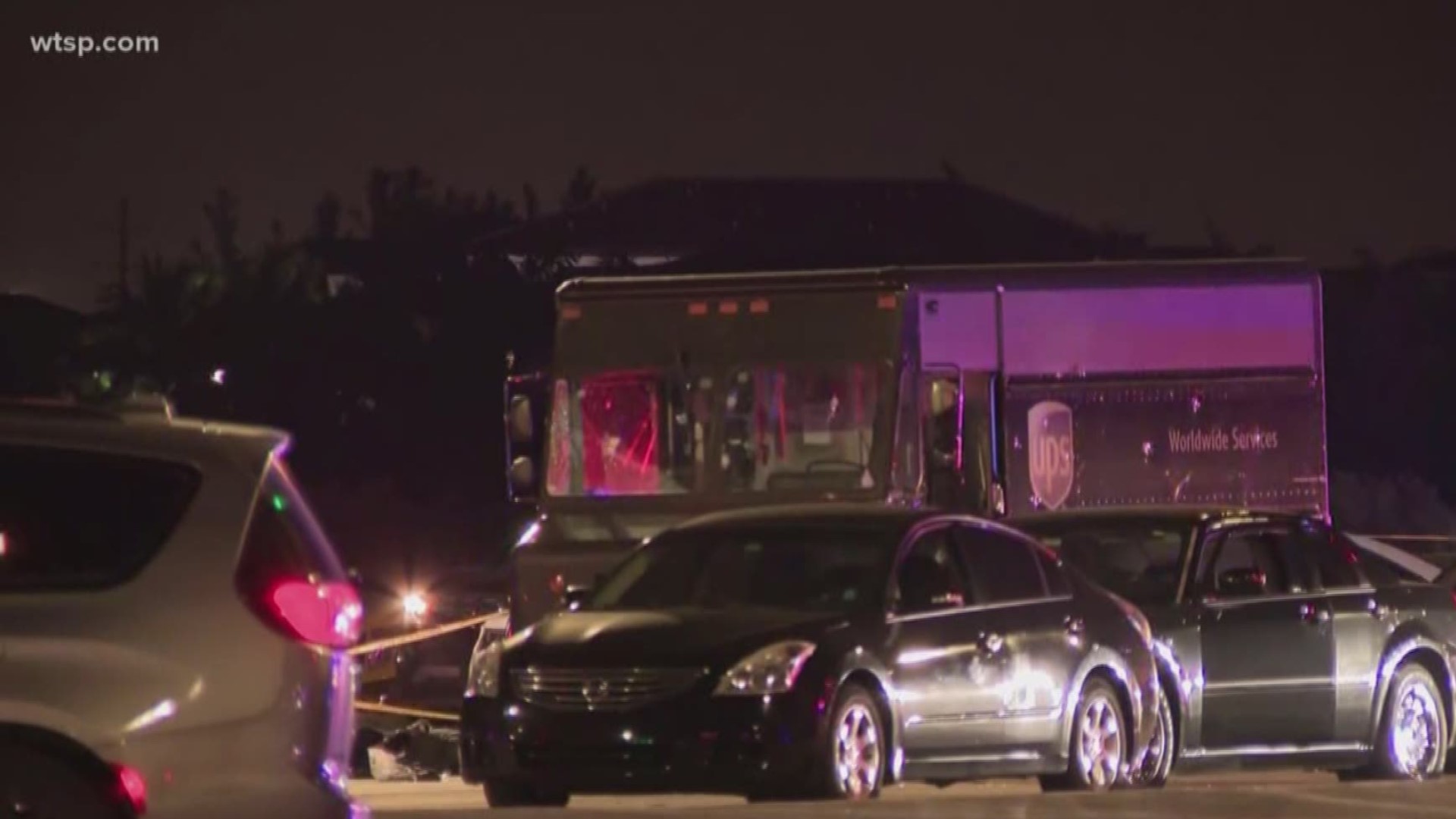 MIAMI — Four people, including a UPS driver, were killed Thursday after robbers stole the driver’s truck and led police on a chase that ended in gunfire at a busy South Florida intersection during rush hour, the FBI said.

Both robbers were shot and killed, and the fourth victim was in a nearby vehicle when shots rang out at a crowded intersection in Miramar, about 20 miles (32 kilometers) north of where the incident began, FBI Special Agent in Charge George Piro said during a news conference Thursday night.

Television news helicopters showed first responders tending to at least one person who fell out of the UPS truck, moments after several shots were fired when the chase ended.

“It’s very early in the investigative process,” Piro said. “There are a lot of questions that are still unanswered.”

In Coral Gables, where the incident began, police said a jewelry store worker was also injured but did not say if she had been shot. There was no immediate update on her condition.

It all started shortly after 4 p.m., when police in Coral Gables received a silent alarm at the Regent Jewelers store in the city’s Miracle Mile area, about 5 miles (8 kilometers) west of Miami. Coral Gables Police Chief Ed Hudak said during a news conference that two suspects were at the store and that shots were being fired when police, summoned by a silent alarm from inside the store, arrived.

The suspects fled in a truck, then carjacked the UPS delivery truck and its driver not long afterward to start the chase into the southern portion of Broward County, running red lights and narrowly avoiding some crashes along the way. The UPS truck finally stopped in one of the middle lanes of a busy roadway, caught behind a wall of other vehicles waiting for a red light to turn green. Television footage showed several officers on foot, some with guns drawn, approaching the truck from the rear and the driver’s side once it stopped.

Katherine Gonzalez said officers were in front of her vehicle, a few feet away from the UPS truck, when the shootout started “out of nowhere.”

“It was shocking,” she said.

News helicopters were following the chase and at least one showed the conclusion live, with one person falling out of the vehicle’s passenger side after several shots were fired. It was unclear if the shots were fired from inside the truck, from law enforcement who were moving in or some combination thereof. The fourth victim, in another car at the intersection, was “an innocent bystander,” Piro said.

“This is what dangerous people do to get away,” Hudak said. “And this is what people will do to avoid capture.”

Piro was asked if there was a chance that either the driver or the bystander may have been hit by a bullet fired by police.

“It is very, very early on in the investigation and it would be completely inappropriate to discuss that,” Piro said. “We have just began to process the crime scene. As you can imagine, this is going to be a very complicated crime scene.”

During the robbery, a bullet hit a window at Coral Gables’ City Hall, which was locked down, Hudak said. No one inside City Hall was believed to be injured, Hudak said.

Hudak said officers responded within 90 seconds, including one officer on foot who was involved in a nearby traffic stop. It was not immediately clear if anything from the jewelry store was taken, Hudak said.

Hours after the chase ended, medical gauze, wrappers and other debris remained strewn across the Miramar roadway’s middle lane, next to the truck which still had its right rear door open. Traffic remained snarled, and it was not clear how long it would take investigators to clear the scene.

There are multiple crime scenes — the jewelry store, the site where the UPS truck was stolen, and the intersection where the incident ended, adding to the challenge investigators will face in piecing together the details.

“We are deeply saddened to learn a UPS service provider was a victim of this senseless act of violence,” Graves said in a statement. “We extend our condolences to the family and friends of our employee and the other innocent victims involved in this incident.”