Rebekah Jones turned herself in on Sunday and was later released on $2,500 bond. 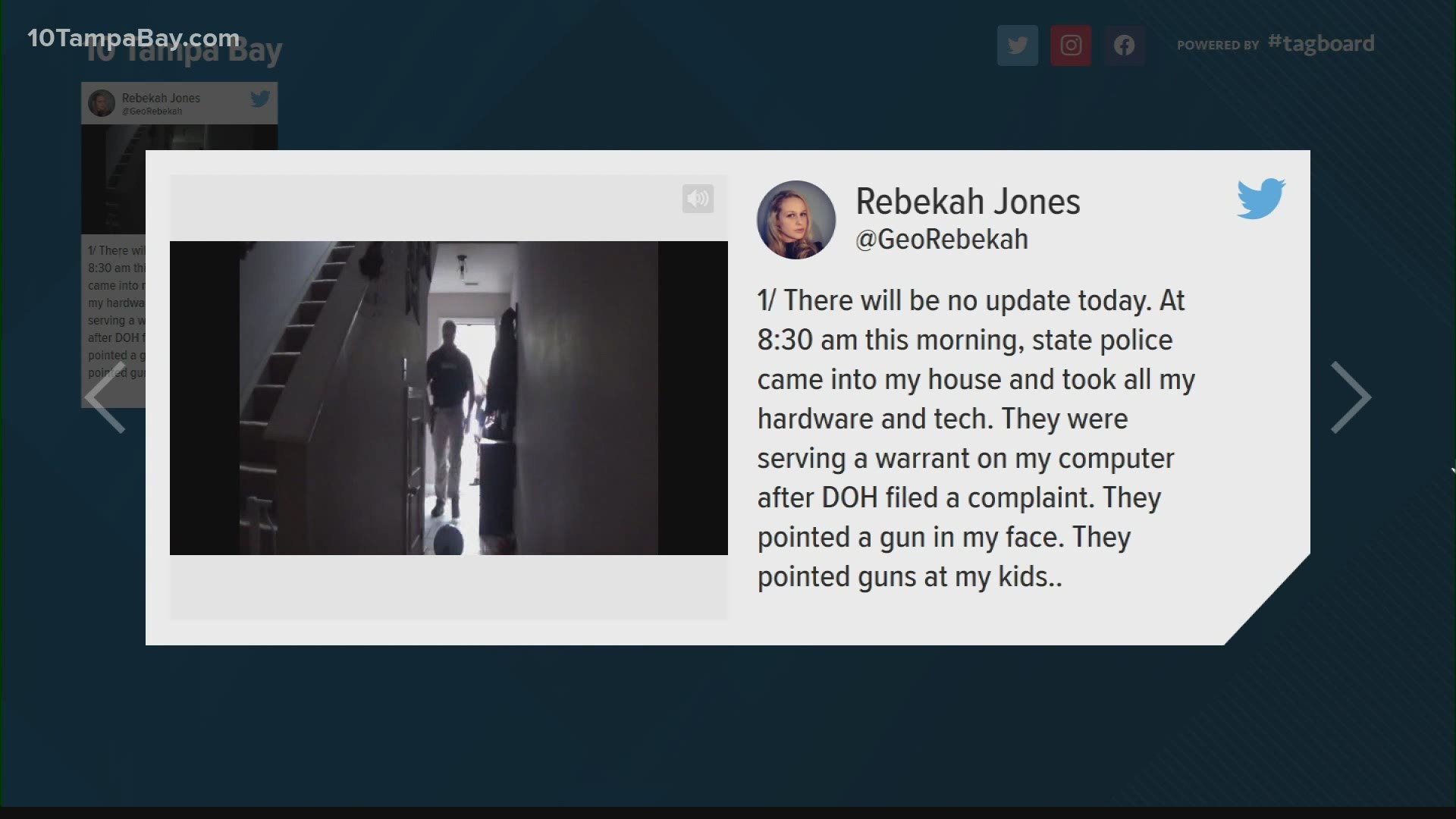 TALLAHASSEE, Fla. — The former Florida Department of Health employee who made headlines after she was ousted earlier in the pandemic has surrendered herself to law enforcement.

Rebekah Jones, 31, was booked into jail Sunday night on a computer-related charge listed on a warrant issued in Leon County. She has since been released on bond.

The Florida Department of Law Enforcement says Jones illegally accessed a state emergency alert system and sent a mass text message that was delivered to roughly 1,750 people before a software vendor was able to stop the text.

Jones has publicly denied such claims.

The Nov. 10 message said: "It's time to speak up before another 17,000 people are dead. You know this is wrong. You don't have to be part of this. Be a hero. Speak out before it's too late."

According to the arrest warrant, the investigation revealed two other text messages were sent on Nov. 10. The warrant says one of them, which was sent to an individual, read "It's time to speak out before another 17,000 are dead. Text Rebekah - From: State ESF8.Planning."

Authorities say they linked the IP address to Jones, who was living in Tallahassee at the time but has since moved to Washington, D.C. As investigators write, they soon realized, Jones had been terminated about six months earlier on May 25.

In December, authorities got a search warrant for Jones' home in Tallahassee.

Video captured law enforcement officers serving the warrant on Dec. 7. They can be seen with guns drawn ordering everyone to come downstairs after authorities say Jones initially refused to cooperate. Jones' husband and children were in the home at the time.

1/
There will be no update today.

At 8:30 am this morning, state police came into my house and took all my hardware and tech.

They were serving a warrant on my computer after DOH filed a complaint.

Jones has since sued the FDLE commissioner over the search, saying it was a "sham" meant to retaliate against her for not manipulating the state's coronavirus data.

Authorities confirmed they seized a computer. And, according to the warrant, forensic analysis revealed the device had accessed the ReadyOp system on Nov. 10.

Investigators claim Jones tried to improperly access the ReadyOp system again on Nov. 12, but those attempts were blocked by increased security that was implemented after the Nov. 10 incident.

The warrant goes on to say Jones downloaded a ReadyOp data file containing the emergency contact information for 19,182 people in Florida.

Jones announced Saturday in a lengthy Twitter thread that she planned to turn herself in to authorities. Leon County deputies confirmed to 10 Tampa Bay Monday morning she had turned herself in Sunday.

"Saying goodbye to my family just now is the hardest thing I've ever done in my life," Jones wrote on Twitter.

After appearing in court Monday, a judge set bond for $2,500 and ordered no contact or access to Florida state databases upon release.

On social media this past weekend, Jones claimed the warrant for her arrest was part of an effort by Gov. Ron DeSantis to silence a critic after he "failed to do his job and got thousands killed as a result."

Back in mid-December, 10 Investigates specifically asked Jones about the allegations against her. During that interview, she denied sending any mass text.

"No. And there's no proof that a hack even happened," Jones told 10 Investigates' Jennifer Titus. "Come to find out that the username and password for the email account that they're referencing was available publicly on the DOH website in seven different locations."

Subsequent research confirms that information was, in fact, public. Users in the emergency alert group shared a username and password -- at least at the time. Security experts and even at least one lawmaker have called for an investigation into the system as a whole.

A judge was expected to rule on the return of Jones' electronic equipment on Jan. 13 but found that the record presented was not complete enough to make a final decision.

Jones made national headlines when the state fired her in May. At the time, Florida leaders said she was asked to resign due to insubordination. However, Jones alleged she was fired after she was asked to manipulate COVID-19 numbers on the Department of Health's website.

At the time, DeSantis accused her of putting data on the portal that the scientists did not believe and refusing to listen to her superiors.

"To protect my family from continued police violence, and to show that I'm ready to fight whatever they throw at me, I'm turning myself into police in Florida Sunday night," Jones tweeted ahead of her booking in Florida. "The Governor will not win his war on science and free speech. He will not silence those who speak out."