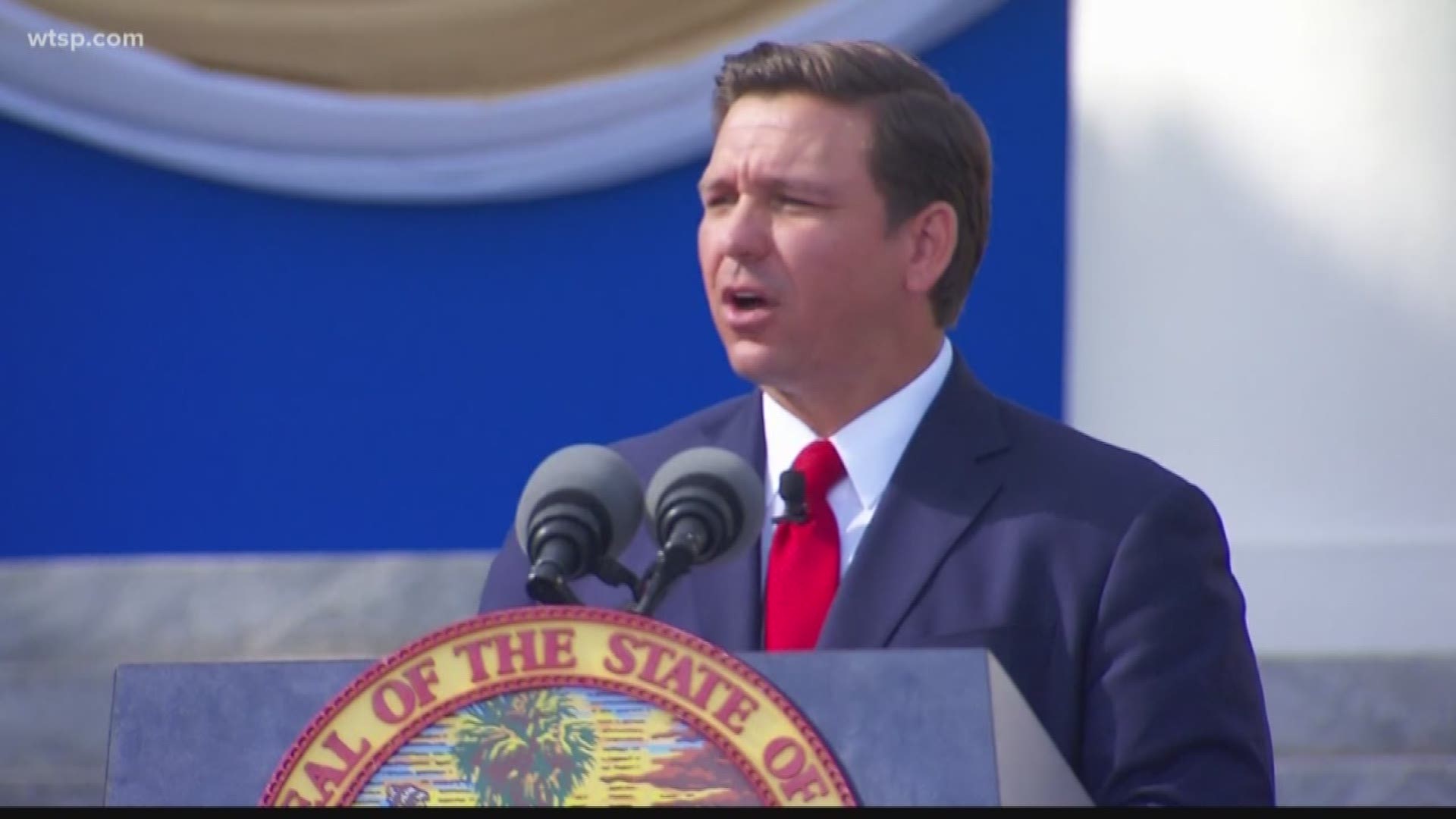 TALLAHASSEE, Fla. (AP) — Former Republican U.S. Rep. Ron DeSantis was sworn in as Florida's new governor on Tuesday with promises to keep taxes low and to make education and the environment a priority.

In a speech filled with naval references, the former Navy officer also promised to be tough on illegal immigration and to appoint Supreme Court justices who won't "legislate from the bench."

DeSantis took his oath in front of Florida's historic Old Capitol. His predecessor, Republican Gov. Rick Scott attended, along with former Republican Govs. Jeb Bush and Bob Martinez and former Democratic Gov. Bob Graham. Scott left the ceremony early to fly to Washington, where he was to be sworn in as a U.S. senator.

"Your laser-like focus on improving Florida's economy has meant so much in the lives of so many here in our state. You are leaving a strong foundation from which we here today can build," DeSantis said.

RELATED: Former Gov. Bob Martinez to Gov.-elect Ron DeSantis: 'Enjoy it' then 'go back to work'

With strong support from President Donald Trump, DeSantis defeated Democrat Andrew Gillum to win the seat. He will work with a firm Republican majority in both branches of the Legislature.

He also said the environment will be a high priority, citing the need to eliminate toxic algae that grow from Lake Okeechobee pollutants and to address red tide off the state's coast.

"For Florida, the quality of our water and environmental surroundings are foundational to our prosperity as a state." he said. "It doesn't just drive tourism; it affects property values, anchors many local economies and is central to our quality of life. The water is part and parcel of Florida's DNA."

"We will stop incentivizing illegal immigration, which is unfair to our legal immigrants, promotes lawlessness and reduces wages for our blue-collar workers," he said.

DeSantis has said he will appoint the first of three Supreme Court Justices on Wednesday. During his speech, he made it clear the court will be different than the one that has overturned Republican laws ranging from abortion restrictions to caps on medical malpractice lawsuit awards. Three liberal-leaning justices were forced to retire Tuesday due to age limits.

"Judicial activism ends, right here and right now. I will only appoint judges who understand that the proper role of the courts is to apply the law and Constitution as written, not to legislate from the bench. The Constitution, not the judiciary, is supreme," DeSantis said.

Bush, who served from 1999 to 2007, said he loved the speech, and praised DeSantis for pushing for school choice, focusing on the environment and his "advocacy of judicial restraint."

"It felt like 1999 all over again. His priorities are right on," Bush said. "I think he's off to a fantastic start."

Democrats saw some good and some bad in the speech. Rep. Joseph Geller said he liked that DeSantis stressed protecting the environment and working with the Legislature. But he was turned off by his criticisms of the judicial branch and his brief remarks on immigration.

DeSantis, 40, is the youngest governor in decades and the first to live in the governor's mansion with young children in a half-century. He decided to forgo the traditional inaugural parade. Instead, he and his wife, Casey, will hold a baptism ceremony at the mansion for their 9-month-old son, Mason.

DeSantis is expected to take swift action in the next week on a number of issues, including whether to suspend Broward County Sheriff Scott Israel. Israel has been criticized for the performance of his deputies during the Feb. 14 shooting at Marjory Stoneman Douglas High School that left 17 people dead. He also has hinted he might take action against other officials.

A small group of protesters across the street from the inauguration held large plastic eyeballs and signs that read "We Will Be Watching You." Some of the people in the group, which numbered less than 100, also had signs that read "Not our Governor" in English and Spanish.