Sen. Shevrin Jones wants an investigation into the raid at the home of Rebekah Jones.

The former data manager for the Florida Department of Health and designer of the state's COVID-19 dashboard spoke out last night after a warrant was served at her home in Tallahassee.

Authorities say the raid was conducted after she used a state messaging system that she was not authorized to access.

Some state lawmakers are now calling for their own investigation into what exactly happened.

“It was definitely shocking to me,” Sen. Shevrin Jones said after seeing the video of the raid at the home of Rebekah Jones.

Sen. Jones is not the only lawmaker with questions after seeing the video that Rebekah Jones posted on Twitter after police raided her house. From Agricultural Commissioner Nikki Fried to U.S. Rep. Charlie Crist, many are looking for an explanation that led to the intense moments captured on video inside Jones' home.

"I believe that this could have been done differently. I believe that maybe the governor, he should question FDLE," Sen. Jones said.

In a statement, the Florida Department of Law Enforcement says agents knocked and called Rebekah Jones and she refused to come to the door for 20 minutes. The statement also says she hung up on them and that agents followed normal protocols and at no time were weapons pointed at anyone in the home.

"Yesterday morning, FDLE agents served a legal search warrant at Rebekah Jones’ residence in relation to an ongoing cybercrime investigation. Upon arrival at the home, agents attempted to make contact numerous times at the front door of the residence. There was no response to attempts to make contact; however, the agents could see movement within the residence through windows / doors.  Other attempts to contact the residents included calling Ms. Jones’ cell phone. Contact was made with Ms. Jones via telephone by the supervisor who identified who and why the agents were at Ms. Jones’ residence.  Ms. Jones then hung up on the supervisor.  No less than seven additional calls were made with no answer.  Agents continued to knock and announce their presence on the front door of the residence.  Ms. Jones later appeared at the window adjacent to the front door, where agents directed her to open the door pursuant to a legal search warrant.  Agents were aware that children were possibly present at the residence and adjusted their tactics for entry.  Ms. Jones did not open the door until approximately 23 minutes after the agents first attempted to make contact at the residence. 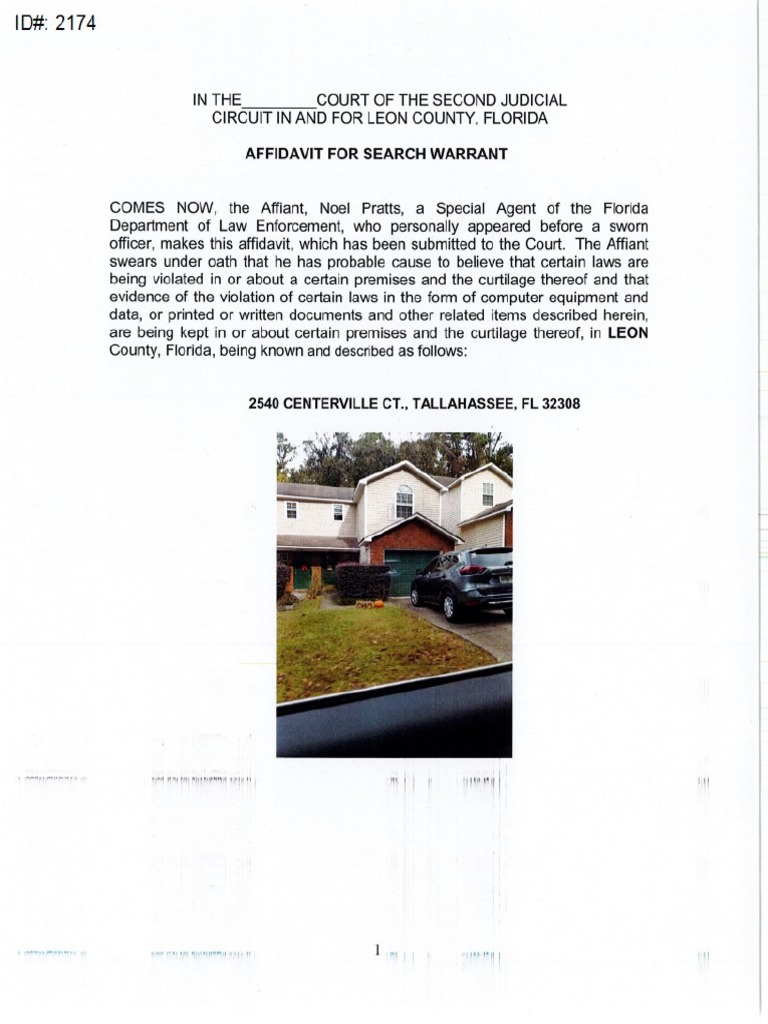 Rebekah Jones Search Warrant FDLE
Discover everything Scribd has to offer, including books and audiobooks from major publishers.

"The first thing I thought was insane. What did she do that warranted that type of reaction to them going to the home in that manner?” Sen. Jones said.

10 investigates obtained the search warrant, which states, "on November 10th an unidentified subject gained access to a multiuser account group and sent a group text that said it’s time to speak up before another 17,000 are dead. Be a hero. Speak out before it’s too late."

It goes onto say that an investigation revealed the IP address came from Rebekah Jones. She once had access to the group but as a former employee, she is no longer authorized to use the account.

Jeremy Rasmussen with ABAcode Cybersecurity says what needs to be investigated is the system the state is using.

"They were using a shared log on -- that’s system accountability," he said.

The affidavit states that all users assigned to the state emergency planning group all share the same username and password.

"If the state didn’t have a system in place -- single sign-on with multi-factor authentication -- then they are lacking in their security. They need a full security review of the system,” Rasmussen said.

Sen. Jones says he is calling for an independent investigation to look into the system as a whole.

"It's the system that we're looking at right now. And we're finding out that there is a lie, there's lies in the Department of Health when it comes to numbers... the 21 million people in the state of Florida, they deserve to know. Looking at (Rebekah) Jones being looked at as some type of criminal. Criminal is what the state of Florida has done over the past 10 months, and how we have handled this. That's what's criminal,” Sen. Jones said.