Beachgoers are now allowed to use chairs, coolers and canopies, but are asked to maintain social distancing and keep groups to 10 or less. 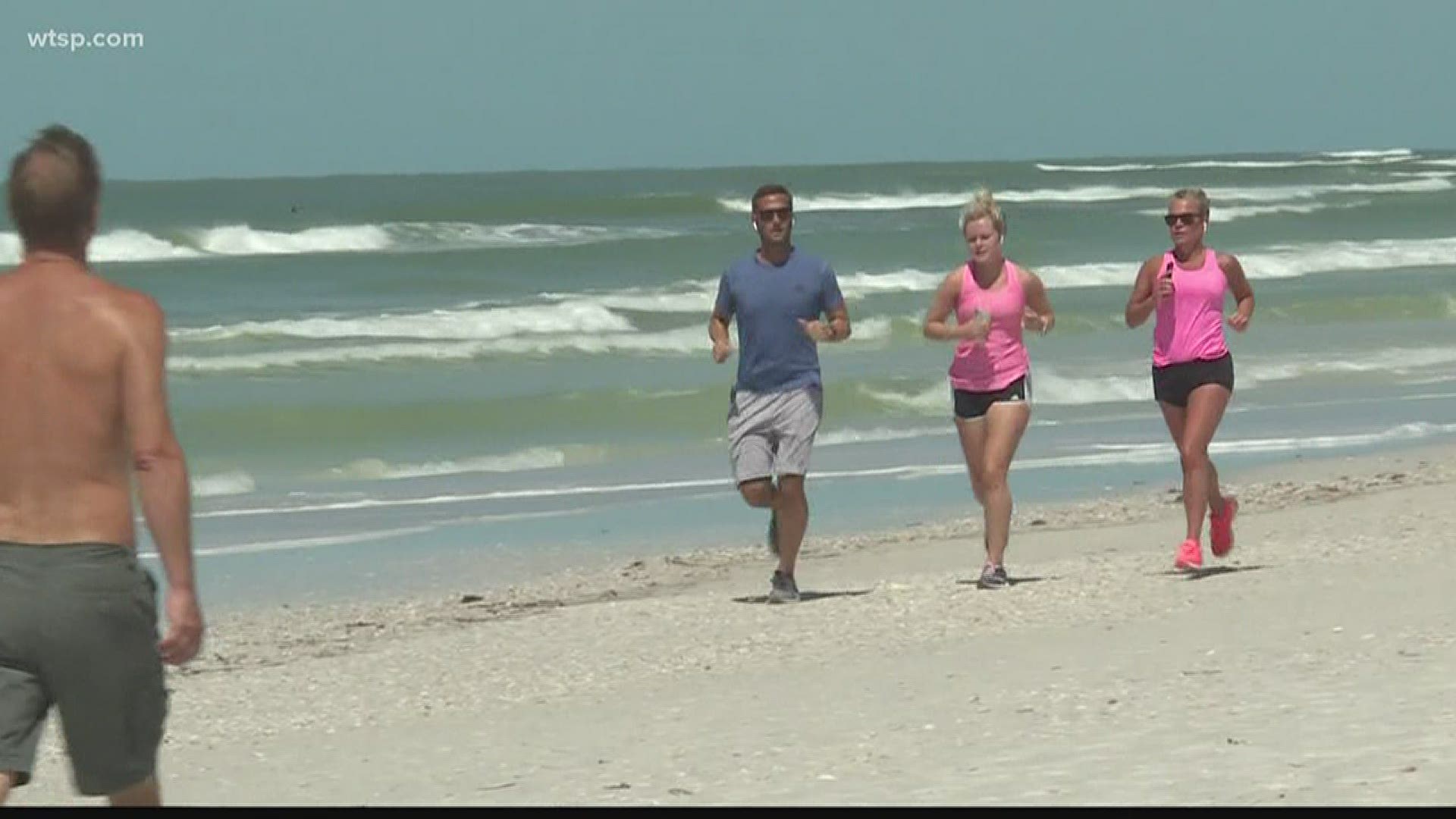 Following Gov. DeSantis' phase 1 announcement for reopening Florida, Sarasota County has updated operations when it comes to their beaches.

The county just reopened public beaches on Monday with restrictions. Only allowing residents to walk, run, bike, fish, surf and swim, but you can't congregate.

But, things have changed-- somewhat.

Residents will now be allowed to do the following starting May 4:

Pickleball and Tennis courts operated by the county are also set to open May 2. For a list of courts click here.

On Monday, beaches in Sarasota County, minus Lido Beach, reopened with restrictions.

Florida has raised eyebrows as shorelines across the state reopen.

Chatter on social media seems split. Some people are happy to have their walks on the beach back, while others say it was too soon to reopen.

Critics worry it’ll make the coronavirus pandemic worse, but supporters argue there’s a safe way to do it.

Ziegler, a Sarasota County Commissioner, says it was an easy decision for him to make.

“It’s time to kind of get back online and do what we can, and I think the beaches are a no-brainer,” Ziegler said

Ziegler went up in the Sarasota County Sheriff's Office helicopter to check out the crowds.

"It’s very clear that social distancing is in play and people are following the recommendations," Ziegler said. "Everyone I saw were just walking down the beach, there were some people swimming, wading in the water, but it was hard to find less than 15,-20 feet between people."

Although Sarasota County beaches are open, the parking lots are not. Less parking means fewer people, at least that is the hope behind the decision to cut down on initial crowds.

If it were solely up to Ziegler, he says he would have completely opened the beaches for all use, including the parking lots.

“I’m in favor of fully opening up the beach, but I’m up to meet in the middle with restrictions,” Ziegler said in last week’s commission meeting.

Commissioners came to the agreement to partially reopen the county beaches with these restrictions:

“The reason why these activities were selected is because if you look at the governors executive order, he mentions specifically that essential activities are allowed,” Ziegler said. “So, all of that was tied into our opening of the beaches.”

What you can’t do is congregate in big groups, set up beach chairs or blankets, nor can you participate in group activities like beach yoga and drum circles.

Lifeguards quickly put a stop to any beach goers just laying out on the sand.

Some other counties in Florida have done the same with their beaches.

Counties like Brevard have more lenient restrictions. Beach goers are aloud to walk or jog, sunbathe, sit in beach chairs, and participate in recreational activities so long as you practice social distancing of no more than five people. The only thing visitors can’t do is park their car in the beach parking lots.

Duval County’s restrictions on their partially opened beaches look very similar to that of Sarasota County’s, but they have time slots. Northeast Florida beaches like Jacksonville Beach, Neptune Beach and Atlantic Beach are open between 6 and 11 a.m. and 5 and 8 p.m. daily.

Commissioner Ziegler says the bottom line, it was time.

There were no major problems Monday in Sarasota. Opening the beaches on a less popular day was also part of the strategy. But still, some leaders are worried.

The mayor of Venice says he felt the pressure to reopen their beaches to avoid confusion, even though he didn't think it was a good idea.

“We should move slowly and methodically,” said Ron Reinsod.

“I would have preferred to have waited until two to three weeks until we could see what is happening in those places on the East Coast that have opened their beaches to see if those places are having issues with spikes in the number of cases,” Reinsod said.

But during the discussion to reopen, County Commissioners didn’t want to waste any more time.

“Now the question is, how much do the beaches have a direct impact on that? I don’t know if anybody knows,” Ziegler said.

Commissioners say authorities will keep monitoring the beaches to make sure people are social distancing.

As of now, there has been no talk of Manatee County beaches reopening, but some Sarasota County Commissioners hope they will follow suit soon.