CLEARWATER, Fla. — The Clearwater NAACP confirms it is investigating the possibility of a second lost black cemetery in the area, this time on the property of a Pinellas County school.

The building still stands but is not in operation.

Atkinson added he has spoken with a school board member to see if the area behind the school can be scanned with ground-penetrating radar at some point in the future. It is unclear if or when that will happen.

Newspaper articles from the 1950s reference moving 350 bodies from an old graveyard in the area.

"It's only African American gravesites that actually get ran over or get bulldozed over or get plowed up,” said Muhammad Abdur-Rahim, the vice president for the Clearwater/Upper Pinellas NAACP.

Muhammad Abdur-Rahim said land for the cemetery in question was sold to the city to establish a "Negro" swimming pool, and in order for the pool to go in, the 350 graves had to be moved.

However, he and Atkinson said all of those bodies might not have been relocated.

"It was 350 that the city of Clearwater identified that was supposed to been moved. But most of the people realized that there had been a lot more bodies at that particular juncture in this particular area than 350,” said Abdur-Rahim, who is also a member of the Clearwater Heights Reunion Committee.

That group, along with the NAACP, is working to find lost African American burial grounds in the city.

“We have been in contact with a funeral director who was a gravedigger at the time when some remains were moved from the (Clearwater) Heights gravesite and to the best of his recollection, not all the remains have been moved,” Atkinson said. “I think what they were supposed to do was remove the ones that had headstones.”

Atkinson said many African Americans could not afford headstones, so those unmarked graves were likely not moved.

RELATED: No graves on tax collector property, but whistleblower insists they’re nearby

The NAACP is working with the Clearwater Heights Reunion Committee on this issue; that group that is investigating a separate cemetery site on the FrankCrum staffing firm property along Missouri Avenue. The FrankCrum site will be scanned with ground-penetrating radar to search for graves. Archaeologists with the University of South Florida have agreed to assist in the search. 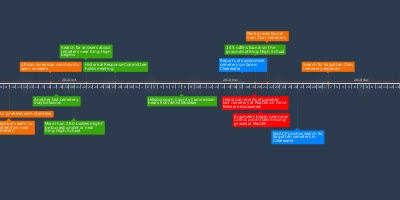 Lost Cemetery Timeline
All the events are represented on the interactive timeline and can be visualized. You can review all the cause-and-effect relations of timeline