MacDill Commander on lost black cemetery: ‘We’re going to get this right’

NAACP leaders visited the wooded area of the base where a forgotten African American cemetery may be hidden. 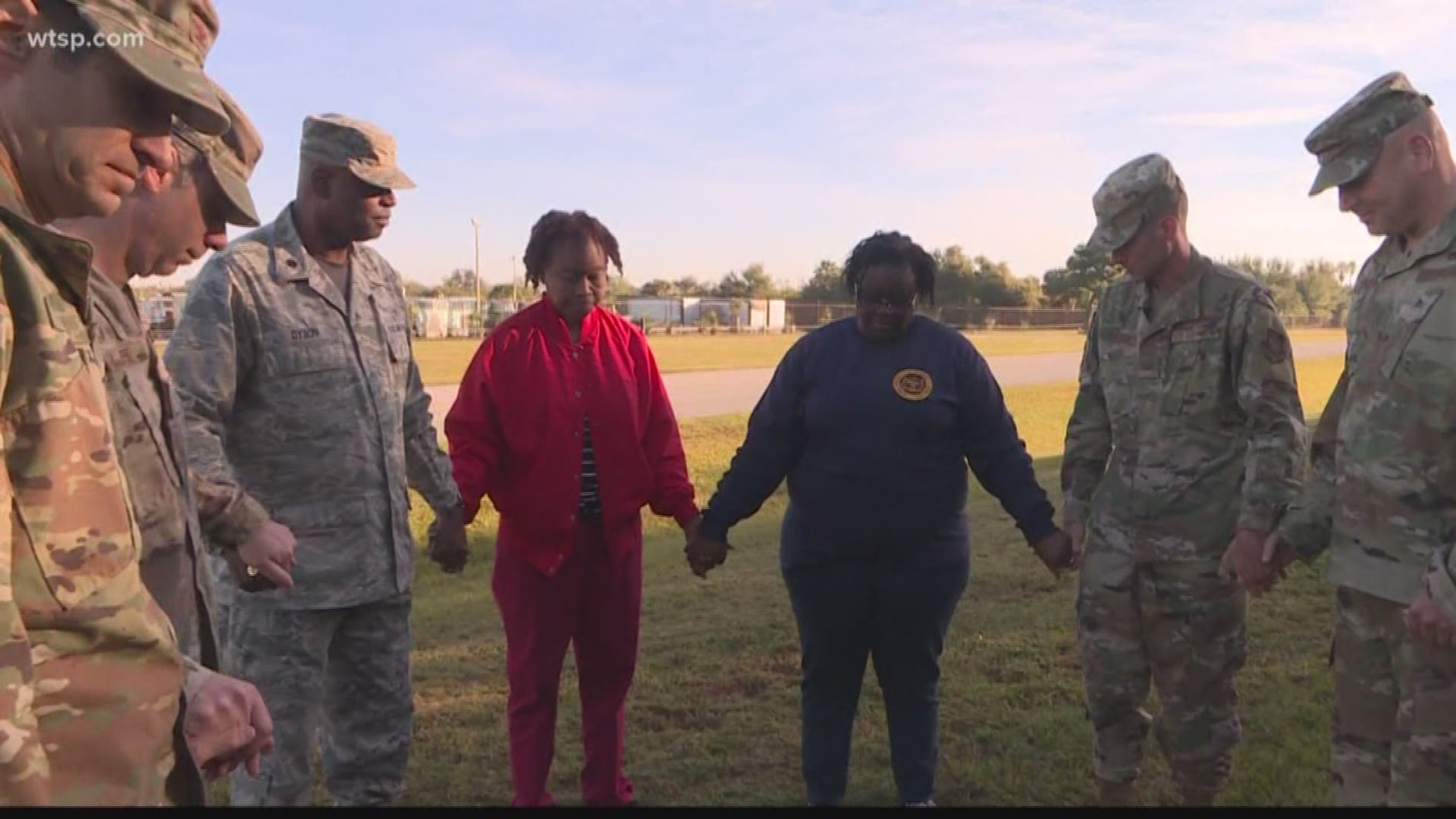 TAMPA, Fla. — It’s not often you see a commander cry, but the emotion that ran through a Friday meeting between top leadership at MacDill and the Hillsborough NAACP over a lost African American cemetery that could be on base property forced Colonel Stephen Snelling to wipe a tear or two during prayer.

“Our main theme is we can’t undo what was done in the past, but we sure can make sure we get it right going forward,” said Colonel Stephen Snelson, Commander for the 6th Air refueling Wing. “That's our commitment to you all is to make sure we're transparent, we communicate with you all and we get this right.”

MacDill Air Force Base welcomed leaders from the Hillsborough NAACP to view the heavily-wooded and secluded area where a 1940s document from the Florida Department of Military Affairs suggests a black cemetery could exist.

The document is a 1940-1941 Veteran’s Grave Registration compiled by the Works Progress Administration. It listed cemeteries throughout the state by county and named the “Port Tampa (Colored) Cemetery” near the intersection of Interbay and Manhattan.

Newspaper clippings show the cemetery existed as early as 1902. 10News searched for death certificates from the cemetery and found 27 with burials through 1930. An 86-year-old woman who lived just outside of Port Tampa told 10News she recalled seeing a deceased infant in an open grave at the cemetery when she was about six years old, which would have been around 1939.

That is the same year the federal government started land condemnation for thousands of acres in order to get the property for what would eventually become MacDill.

Hillsborough County commissioners in 1940 urged property owners in the area to give the government the right-of-way to build the road leading to MacDill. There are no records of the cemetery after that time.

“We have a base historian, and he knows just about everything about this base, and even he had no idea. This is the first time we'd heard anything about it, at least with all the folks that are here now, said Col. Snelson. “I don't know about years past if there was discussion about it. We hadn't found anything in our records at all.”

Col. Snelson, along with Col. Benjamin Robins, Col. Edward Phillips, Chaplain Lt. Col. Clyde Dyson and Chief Master Sgt. Anthony Green were all present for Friday’s meeting with the NAACP. Chapter President Yvette Lewis requested to see the site after learning a cemetery for African Americans in Port Tampa existed there before the base was built in 1939.

During that time, Jim Crow laws dictated separate accommodations for blacks and whites, and that included cemeteries. Port Tampa was its own city until Tampa annexed it in 1961, and it had a significant enough African American population to support a burial ground.

According to a 1927 study called “Negro Life in Tampa” and a 2018 USF report titled “The Negroes are There to Stay,” in the early 20th century, African Americans made up as much as 45 percent of the population.

“African American history is not pretty,” said Lewis. “You read about this history, and you see what people did to African Americans back then. Now in this year, 2019, you feel like you're living what these people went through and they are treated less than. So, as a living person, my thing is, what can I do to step up and make their lives, even though they're resting, feel better?

For Lewis, part of reconciling the past includes working with MacDill leaders throughout the cemetery search.

“The NAACP Hillsborough, we are here and we just want to help y'all fix this and work together. And we really appreciate this on all levels coming from our branch,” she said to Col. Snelson.

Lewis said she was grateful the base commander, base leadership and even the base chaplain rode out with the NAACP to view the approximate location of the cemetery. For her, it showed empathy and a true desire to rectify a wrong from the past.

“I feel more comfort with y'all than I have ever felt,” Lewis said of the meeting with base leadership. “I've seen these sites, dealt with a lot, but you gentlemen just made this so beautiful and so accepting. I wish we didn't have to meet this way, but there's souls in there. And we got to fix this.”

Upon viewing the location on the base where the Veteran’s Grave Registration marked the cemetery, Col. Snelson explained to Lewis that because of how heavily wooded the area is, MacDill will have to hire contractors to survey the site for possible graves. The area has been restricted until surveys can take place.

"Just hate to see that your loved ones is somewhere in there. Just in there. Lost,” said Lewis, who was reassured by Col. Snelson that the base will do everything it can to find the missing cemetery and honor the lives resting there.

“If we find graves in there, we're going to mark this appropriately. We'll pay the right respect. The long-overdue respect,” said Col. Snelson. “These folks were put to rest, and while we need to investigate this and find if there are graves out there, we need to do it respectfully and without disturbing their rest. And I think that element of respect is so critical at this stage.”

“Lord knows I need Jesus to get me through this,” said Lewis. “This is very emotional.”

If graves are found, it would be the third erased African American cemetery to be discovered this year.