At the same intersection where Floyd’s life was taken, the tragedy of his death has brought people together from all walks of life, creating a new sense of community 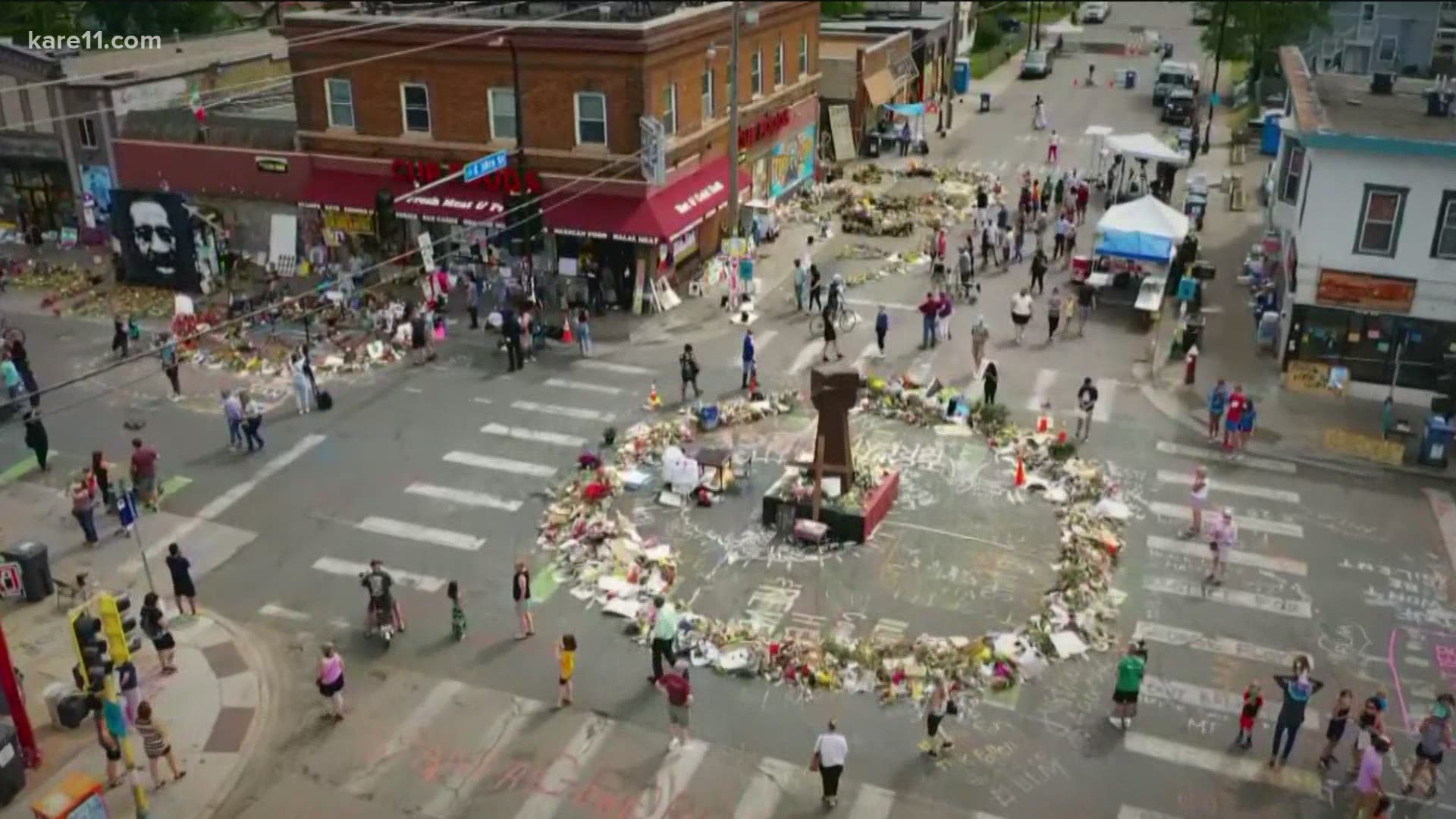 MINNEAPOLIS — Over the course of the last year, the intersection at 38th and Chicago has become a sacred space, where many lessons have been taught and learned in the wake of George Floyd’s death.

"How do you stand in your truth, how do you demand the change you need to see," said Marcia Howard, who lives near the intersection and has been holding space in the square for a year now.

A space of reflection and expression.

"It's nothing but genuine love just being in this space," said Mileesha Smith, who's been holding space at the intersection.

"Feeling grief, sharing grief," said Heineman who's lived in the neighborhood for over 30 years.

"Seeing the imagination and creativity of the community really grow and develop," said Janelle Austin, who's been apart of holding space at the intersection.

RELATED: One year after his death, the Twin Cities remember George Floyd with celebrations and somber reflection

At the same intersection where Floyd’s life was taken, the tragedy of his death has brought people together from all walks of life, creating a new sense of community.

"I didn’t know any of my neighbors before this and now I know them all and I feel so much safer because we take care of each other and I didn’t have that before," said Jenny Jones who lives in the neighborhood.

Which for some, comes as no surprise as the neighborhood is no stranger to change.

"I’ve lived here a little over 30 years and the neighborhoods been really stable for that whole time in both good ways and bad ways," said Heineman.

"This is an area that has been historically over promised and under delivered," said Howard.

However, this time around, the change is from within.

"When this took place it was an opportunity to change the narrative," said Akeem Cubie, who's been holding space at the intersection.

These are just a handful of the people, dedicating their lives to the movement at 38th and Chicago, some of which have left their full time jobs within the last year, to do things as they say the “people’s way.”

"Allowing us to overserve an underserved community," said Kia Bible, who lives in the neighborhood.

"It’s a blessing to have a community that helps you out with anything," said Innocynce Johnson, Bible's young daughter.

Offering things like free food, clothes, and health services, while giving the people a place to belong.

"This is not an autonomous zone, what we’re trying to do it excludes no one," said Cubie.

"We are creating the world we want to live in every single day in this space," said Howard. She went on to say, "this stand that we’re making is for liberation, it is for justice, it is to get something for black folks, brown folks, indigenous folks who have suffered historically in this city.”

While it’s yet to be determined how the stance taken at 38th and Chicago will end, the community is at a crossroads with a reopening of the intersection raising concerns and challenges.

As that conversation continues...

Whatever becomes of the now sacred space, will be forever etched in history.

"When yellow school buses drop off children to come see this site decades from now, everyone who has been here……they will know what we stood for and what we continue to stand for here at George Floyd square," said Howard.

The group holding space at the square has sent the city a resolution with a list of 24 demands they want to see fulfilled before the streets are opened.

Other proposals from the city calls for the creation of a memorial at the intersection that would still allow traffic to flow through.

To learn more about the George Floyd Global Memorial or to donate to the cause, click here.

RELATED: George Floyd family starts fund to support the neighborhood where he was murdered