It's considered a dramatic move to tackle climate change in California. 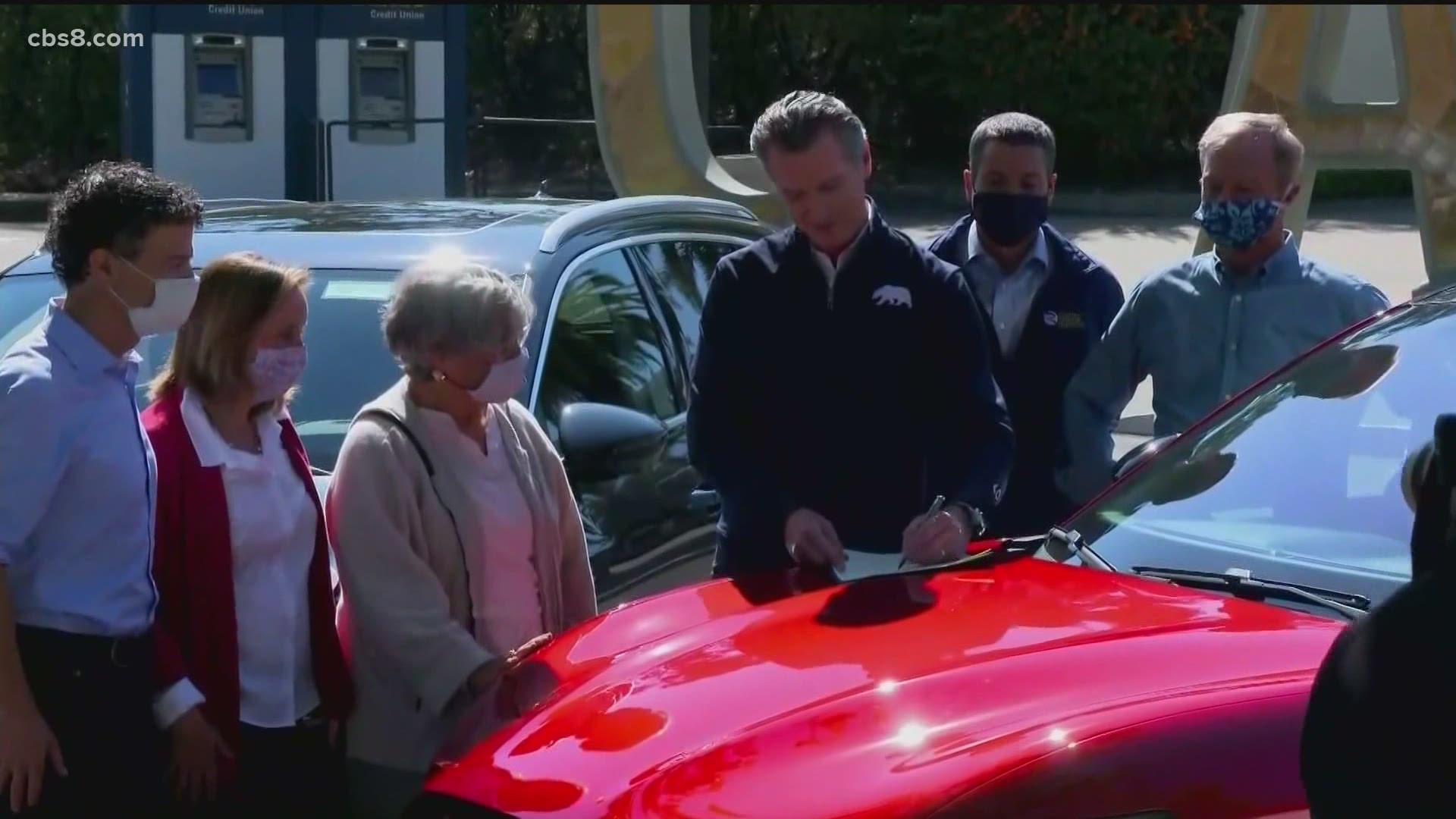 California has for longer than half a century been a leader in driving new, cleaner car technologies with its regulations. Today, Newsom raised the stakes: On the hood of a red Ford Mustang Mach-E, an all-electric vehicle expected in dealerships later this year, he signed a new executive order that aims to eliminate new models of traditional cars and put more vehicles powered by clean technologies such as fuel cells and batteries on California’s roads.

The order also tackles fossil fuel pollution before it comes out of tailpipes, tasking California lawmakers with putting an end to new fracking permits by 2024. The Newsom administration’s approval of new oil and natural gas fracking permits this summer has drawn criticism from environmental groups.

Taking aim at Californians’ beloved cars is a risky political move, especially during an economic crisis. And it’s not clear whether a ban would survive in court, according to some legal experts.

Automakers are likely to mount an aggressive campaign to fight the standards. But they had no immediate reaction to the announcement today.

RELATED: Reaction to California governor's ban on sales of new gas-powered vehicles by 2035

California is already waging a battle with the Trump administration over the state’s power to clean its air and cut greenhouse gases that warm the planet. Some political consultants said they are concerned that Newsom’s order will add ammunition for President Donald Trump during his campaign.

But Newsom pitched the proposal as an economic boon. California is home to 34 electric vehicle manufacturers, he said. And electric vehicles make up the state’s second-biggest export, according to Newsom.

“This is the next big global industry, and California wants to dominate it. And that’s in detoxifying and decarbonizing our transportation fleets,” Newsom said. “And so today, California is making a big, bold move in that direction.”

The news comes on the heels of Newsom’s declaration that California is facing “a climate damn emergency.” Wildfires and record-breaking heat have ravaged the state in recent weeks, choking residents with smoke as 3.6 million acres burn. Droughts also are amplified by climate change.

Newsom’s executive order will not take anybody’s car away. Californians can still drive and resell their gas-powered vehicles. But it does direct the Air Resources Board to phase out gas-powered passenger vehicles and certain freight trucks by 2035, and medium and heavy duty trucks by 2045.

In the past, an auto industry group called the Coalition for Sustainable Automotive Regulation decried California’s efforts to cut greenhouse gases, siding with the Trump administration in litigation. “With our industry facing the possibility of multiple, overlapping and inconsistent standards that drive up costs and penalize consumers, we had an obligation to intervene.”

These carmakers, Newsom said today, will find themselves “on the wrong side of history.”

Assemblymember Phil Ting, a Democrat from San Francisco, applauded the governor’s decision. “The fastest way to make the biggest dent in slowing the effects of global warming is to embrace cleaner cars. Many other countries have already committed to this goal, and I’ve been working tirelessly for years to make this transition happen in California.”

Whatever happens in California with cars usually drives nationwide changes, since the state has such a large percentage of the nation’s vehicles.

The state has flirted with banning gas-powered vehicles before. Last May, Air Resources Board Chief Mary Nichols alluded to a potential ban if California and the federal government continued to butt heads.

California since the 1960s has taken the lead in curbing emissions from cars and trucks, beginning with mandates that led to catalytic converters cleaning up exhaust that created severe smog. Transportation is the biggest source of greenhouse gas pollution, smog and diesel exhaust in the state.

Now, California is fighting to maintain its clean car authority in court. And in the meantime, the state struck a deal with five major automakers — BMW, Ford, Honda, Volkswagen and Volvo. The car companies agreed to recognize California’s authority in return for a more relaxed schedule to meet the state’s greenhouse gas requirements.

California has already pledged to not buy cars for government fleets from automakers that spurned its clean car deal. And at a meeting with the California Transportation Commission last year, Nichols spoke vaguely of  “potentially looking at things like fees, taxes and bans on certain types of vehicles and products.”

But Nichols’ prewritten remarks, obtained by Bloomberg, were starker, saying that federal clean car rollbacks could prompt the air board to look for other ways to curb pollution, including “an outright ban on internal combustion engines.”

At the time, Meredith Hankins, then a Shapiro fellow in Environmental Law and Policy at the UCLA School of Law, told CalMatters that such a ban would be difficult to get past the federal Environmental Protection Agency.

“It may be sort of dead on arrival under this current administration,” Hankins said. And going around the EPA is “an untested legal question.”

CA is phasing out the internal combustion engine.⁰
By 2035 every new car sold in CA will be an emission free vehicle.

Cars shouldn’t give our kids asthma.