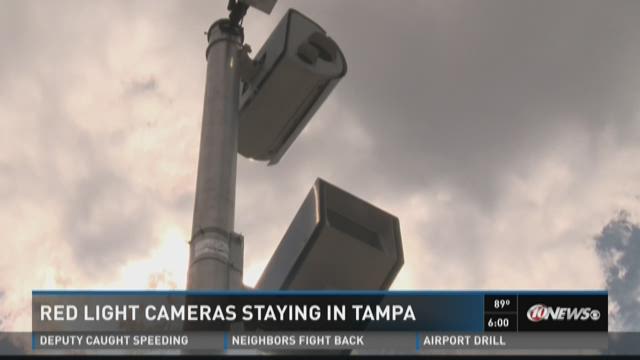 TAMPA, Florida – A deeply-divided city council approved a new extension to Tampa’s red light camera contract by a 4-3 vote Thursday, giving Mayor Bob Buckhorn’s administration a victory as it negotiated a two-year extension on a controversial program that has been terminated in numerous other local cities.

Tampa operates the region’s largest red light camera program, with 21 intersections monitored by 54 cameras when fully-operational. The extension ensures the cameras will continue to operate through October 2018, pending legal challenges over the program’s constitutionality and legislative challenges from opponents of the program in Tallahassee.

10Investigates first alerted the city of Tampa to its ability to renegotiate a better deal on its lucrative camera contract 2014, but the administration chose not to, with Mayor Buckhorn saying, “we like our contract.” But after 10Investigates reported in April 2016 that the city’s contract again expired without seemingly anyone noticing, city staff spent the summer renegotiating with vendor American Traffic Solutions (ATS).

City staff finalized a new deal this month with a $75,000-per-year discount, plus additional legal indemnifications, so ATS would absorb more of the potential fees associated with an ongoing court challenge that may ultimately end up in the Florida Supreme Court. The extension will be retroactively dated to March 31, 2016, prior to the previous deal’s expiration. The city says citations issued since the April expiration are valid tickets and must be paid.

Mayor Buckhorn has said the camera program is one of the city's only safety initiatives that are revenue-positive (prior to factoring in officers’ time).

“It’s my opinion these cameras act as some sort of a deterrent,” said councilman Harry Cohen, who supported the new contract. “I’ve been ticketed by an officer for making an illegal maneuver in an intersection. And every time I pull up to that intersection, I make sure I don’t do it again.”

Cohen was joined in his support for the contract extension by chairman Mike Suarez and councilmembers Lisa Montelione and Charlie Miranda. Most councilmembers acknowledged a comprehensive state study suggested red light cameras provided no measurable safety improvements, but a number of other studies have indicated they may cut down on T-bone crashes, even while increasing rear-end collisions.

10Investigates has reported how the majority of red light camera tickets go to drivers making safe, everyday driving maneuvers such as rolling right turns and going through a yellow light a fraction of a second too late.

And after 10Investigates prompted the state to extend yellow light intervals to safer lengths all across Florida, the number of drivers cited in Tampa plummeted. But the city has returned to nearly 2013 ticket-writing levels by writing nearly twice as many red light violation tickets for drivers making left turns.

“The perception is this is not about public safety,” said City Councilman Frank Reddick, who said he used to support the camera program until he was ticketed himself for “something I truly thought was unnecessary.”

Prior to the vote, councilmembers butted heads with Chairman Mike Suarez over whether Matt Florell, a camera critic from St. Pete, could answer direct questions from councilmembers about his experience and knowledge of camera safety stats. Miranda, the council’s longest-tenured member, admonished Suarez for trying to “mute” Florell, before council overwhelming approved a motion to allow Florell to answer direct questions regarding inconclusive safety claims.

Tampa’s extension bucks a trend of local cities pulling the plug on their camera programs, as St. Petersburg, Gulfport, Kenneth City, Temple Terrace, and South Pasadena leaders have all terminated their contracts in recent years. Additionally, camera programs are currently suspended in Oldsmar and unincorporated Manatee County. Brooksville leaders voted to end their camera program, but a legal challenge from vendor Sensys kept the cameras on.