The intersection of State Road 60 (Brandon Boulevard) and Pauls Drive has drivers on edge. The left turn can be difficult, often causing delays and accidents. 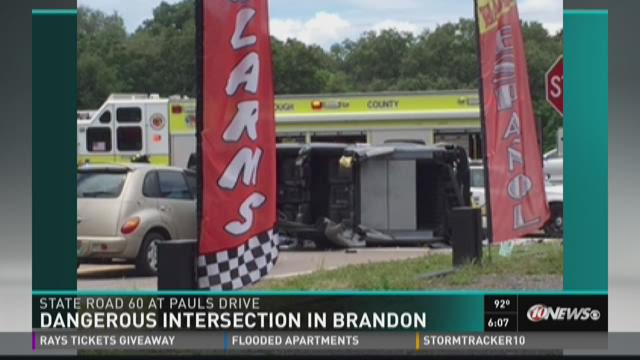 Brandon, FL -- The intersection of State Road 60 (Brandon Boulevard) and Pauls Drive has drivers on edge. The left turn can be difficult, often causing delays and accidents.

"It looks so much easier to do than it is," said Kathy Eldridge, as she watched a driver attempt to turn left from Pauls Drive onto S.R. 60.

The driver has to find a break in four lanes of fast moving traffic in order to make the left turn. As he inches out, another driver pulls up behind him. This second driver wants to turn right, but has to wait for the first driver to turn left. Are you tired, yet? Imagine dealing with this everyday.

"There has been cars totaled here and I think it is just the grace of God that people haven't died," said Eldridge. She lives in the area and drives past this intersection often.

The Florida Department of Transportation has studied this intersection three times before.

"We studied this location in 2003, 2008 and 2009. Since seven years has passed, we will study it again. We will wait until school is in session to obtain accurate traffic count data and the study should be complete in approximately six weeks after that time (after school starts)," wrote Kris Carson, FDOT spokesperson.

"I think it's worth preventing a death than to just let it go unnoticed," said Eldridge.

For now, you can avoid the left turn from Pauls Drive by using the nearby signaled intersections at Hilltop Road and at Lakewood Drive.