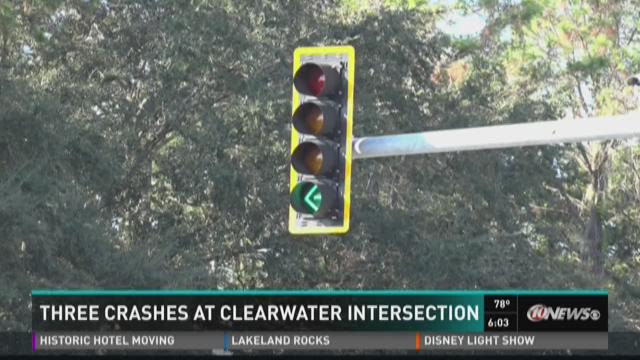 CLEARWATER -- An intersection in Clearwater is in the spotlight after a string of serious crashes. There have been at least three accidents in the past two weeks at the intersection of Countryside Boulevard and Curlew Road. People who live nearby believe the traffic signals are posing a safety issue. Many of the accidents happen when drivers turn left on the flashing yellow arrows which are at every direction of the intersection.

Kama Fernandez can see Curlew Road from her back porch. She witnessed a fatal crash there three months ago on August 22.

"I was sitting on my back porch having coffee and watched a motorcycle speed through. Then, I heard the impact. The motorcycle was on fire and there was a fatality," said Fernandez as she starred at the now quiet intersection on Wednesday.

The driver of a van made a left turn on the flashing yellow arrow when a motorcyclist crashed into him and died.

"It was pretty tragic and scary," said Fernandez. Ever since, she has become obsessed with pushing for protected green turn arrows. "The accident could have been prevented if that light had been red," she said.

On Monday, FDOT and Pinellas County signal teams changed two directions of the intersection to protected green arrows during the hours or 6 a.m. and 7 p.m. However, the flashing yellow arrows remain on eastbound Curlew Road and northbound Countryside Boulevard. FDOT engineers told 10News they will monitor the intersection to see if all directions should be modified.

Fernandez is adamant that this issue cannot wait and wants FDOT to make it a priority.

"I don't think their listening to me directly and going to make a change. Whenever cars drive by, when you hear screeching sounds, I think we all go into panic mode and its not a good feeling," she said.