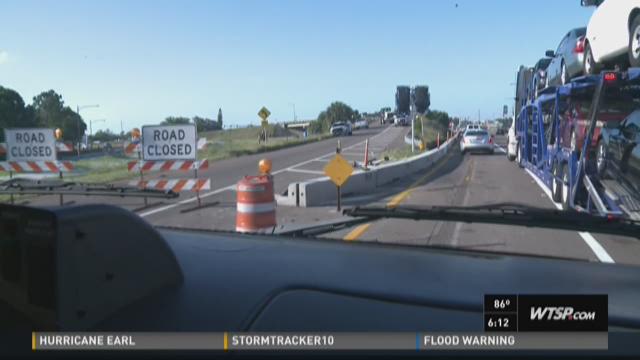 Tampa Bay, FL -- Get ready! The roads will be extra busy next week with both Hillsborough and Pinellas county schools starting back on Wednesday. Traffic can increase by 30% when school starts. Whether your child walks to school or you drive them, it is a good idea to plan a safe route ahead of time.

Construction can be a big safety concern, especially near school zones. 10News WTSP found out the construction projects that could affect your route to school.

Below is a list of roads near school zones that will be affected by construction next week.

- Southbound Bruce B. Downs Boulevard south of Fletcher Avenue: The center lane is closed for emergency repairs until Wednesday, Aug. 10. This is near Mort Elementary School.

- 113th Street at Park Boulevard: Possible lane blocks from construction. This is near Seminole Elementary School.

- CSX closing of Kentucky Avenue the week of Aug. 8 (may continue into early following week)

- CSX closing of Massachusetts Avenue (near Pine Street) the week of Aug. 15.

- CSX closing of Ingraham Avenue the week of Aug. 22.

- C&M milling and resurfacing Frank Lloyd Wright Way from Ingraham Avenue to Hollingsworth Road on Aug. and should be complete by Aug. 7.

- Lincoln Avenue from Beacon Road to Ariana Street: Individual blocks along this segment will be closed to northbound traffic thru December for sidewalk construction. A travel lane in the southbound direction and access to all residences and side streets will remain open throughout construction. Drivers desiring to travel northbound have multiple options including Harden Boulevard and Camphor Drive.

- Robson Street from Baird Avenue to Florida Avenue: This segment will be closed to westbound traffic starting in October (possibly November) and ending in February for sidewalk construction and replacement of the ditch on the north side of the road with a storm drain system (pipe). A travel lane in the eastbound direction and access to all residences and side streets will remain open throughout construction. Traffic desiring to travel west from Florida Avenue to Baird Avenue will have multiple options including Carver Street and Griffin Road.

- Bellflower Way, Edgewood Subdivision, Washington Street, Julian Street and Pasadena Heights: Construction to begin within the next 15 to 90 days.