Laid out on tables at a lab at the University of Florida, are people from 400 years ago. 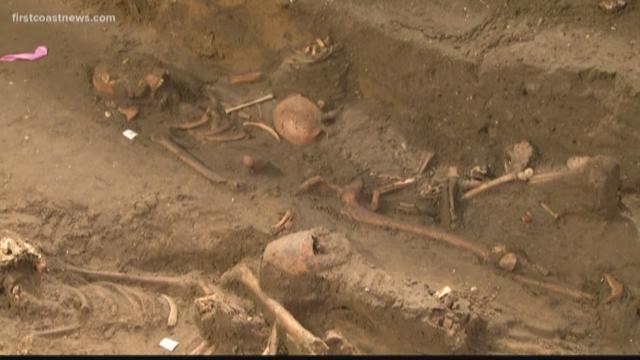 ST. AUGUSTINE, Fla. --- Laid out on tables at a lab at the University of Florida are the remains of people from 400 years ago.

"These burials can speak volumes," Bioarchaeologist John Krigbaum said. He will lead his team while they study these ancient bones.

Pointing to a skeleton on a table, he said, "This is the first burial uncovered at Los Remedios."

That burial is the first one of 20+ burials that St. Augustine archaeologists discovered underneath the floorboards of a store in downtown in early 2017. It's believed these people were some of the first settlers in St. Augustine dating back to 1572, buried under a colonial church.

That African male is believed to have sailed with the Spanish to settle Florida.

"It might be consistent with the Moors," Krigbaum noted.

Now Krigbaum is trying to determine what these burials can reveal.

"Bones can tell us a lot about individuals and individual identity," he said.

The bones can reveal gender, age, and even heritage

"Most of the individuals here are probably European," Krigbaum explained. "We do have some Africans that are fully treated in Catholic burials practice like the others are."

Just a look at the skull can tell a lot.

Laura Van Voorhis is working in the UF lab. "Europeans had very thin nasal apertures and have smaller eye orbits," she explained.

The bones can also hold secrets about diseases.

Krigbaum pointed out that one person's bones showed arthritis.

The teeth hold information too.

"You can see when that psychological stress happened in their lives and that helps us build a life history," Brianna Rae said. She is studying the burials' teeth.

About nine or ten of the 24 burials are children, with tiny little bones

Jordan Wright of Jacksonville is also working in the lab. She is studying the children's bones. She pointed to a collection of two skeletons on a table. "These two here are similar in age. They are about 3-5 and 3-6 years old."

The burials on the tables do not have the skulls with them. That's because the skulls will undergo a special kind of high-resolution cat scan.

It will reconstruct the skeletal remains, Krigbaum said. "The skull materials are broken and we saved them in these bi-sected soccer balls." He added that "Virtually we will have experts piece the pieces together to make a proper reconstructed skull."

And while Krigbaum and his team could easily get lost in the science of the bones, they don't forget they are working with people.

"The dead teach us about the living in many ways and give us a better sense of humanity and history," he nodded.

All the while, they remember that many of the bodies they are studying belonged to people who crossed the ocean to St. Augustine hundreds of years ago. Now those burials have secrets to share -- if you stop to listen.