'We were looking for the worst place in the world': New exhibit aims to immerse Texans in a World War I battle

Using modern technology, a creative team from Dallas is part of a project to take people back in time more than a century and immerse them in a virtual WWI battle 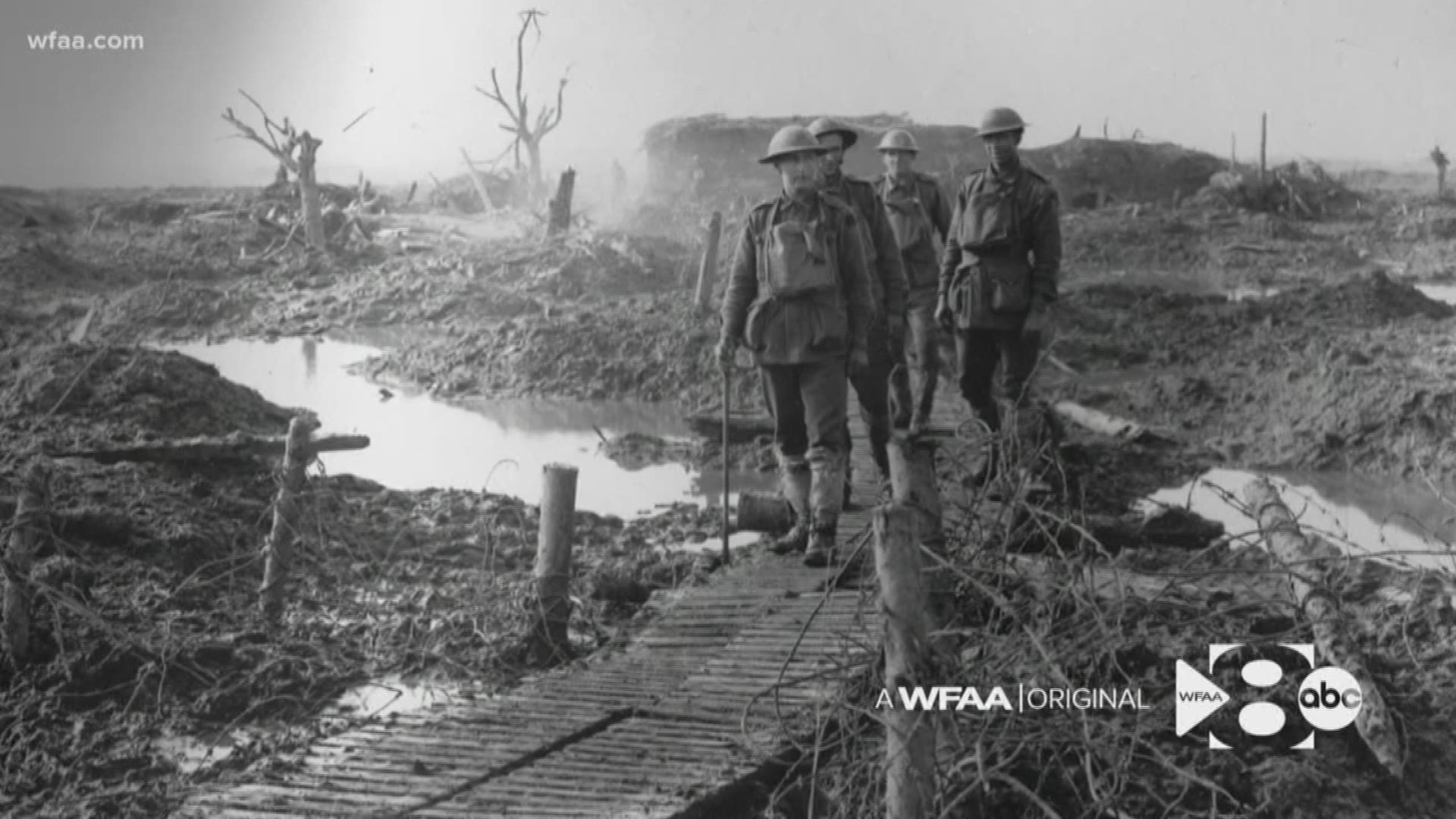 AUSTIN, Texas — Inside a small brick building in downtown Austin, these are some of the comments in a guest book at a new exhibit called "War Remains," an interactive virtual reality taste of World War I:

“I have been trying to imagine this all my life — I finally have.”

“I have never been in combat and I am more certain than ever that I don’t want to be. What an amazing and terrifying experience.”

The experience is based upon research into different battlefields in the First World War, explains legendary war storyteller Dan Carlin, a podcaster renowned for his Hardcore History series.

"We were looking for the worst place in the world, and it was a tie — a bazillion ties."

The combined scenes from ghastly battlefields on the Western Front are brought to life through virtual reality headsets that can give such a powerful encounter that visitors get a primer before they are sent into the self-paced tour that typically takes 12 minutes to complete.

After the preparation, you enter a simulated war, with audio designed by Skywalker Sound. Through wireless headphones, along with richly descriptive narration from Carlin, you hear yelling. Artillery. Explosions.

“I am fascinated by the extremes of human experience, and this is one of the most extreme things I can think of," Carlin said.

In addition to the audiovisual immersion, the exhibit includes mind-fooling haptic sensations. You walk through a mock war trench that vibrates as the battle rages around you. Carlin compares this experience with the actual history it portrays.

Looking on as someone else walks the exhibit, it appears they are aimlessly wandering through a quiet dark exhibit, interrupted by the occasional rattle of the haptic devices. But inside the goggles and headphones, the experience can be intense.

“There is stuff in here for your nightmares, regardless of what it is that plagues your nightmares," Carlin said. "We had one [person] who just kept screaming out obscenities all the way through. It sounded like he was fighting. But you get that. That is to be expected to a degree. That is how you know it is not cheesy. If you have erred, you have erred on the side of heaviness rather than goofiness.”

That was a hard line to not cross. The power of VR technology actually presented a big challenge, said Ethan Stearns of MWM Immersive, which produced "War Remains."

“We are trying to play at the forefront of what the technology can do, but also not let that be the reason we are creating this," Stearns said. Stearns said MWM Immersive went to pains to convey the extraordinary violence of the war without glorifying it, and without letting the technology become the focus. The story of the war is what needed to matter the most.

Director Brandon Oldenburg said it was a real balancing act to give a realistic sense of a World War I battle without making the experience so intense that most people wouldn’t want to enter it.

"I wanted to make sure we were doing respect to the people who went through this tragedy and also that it wasn’t tame where they would be upset and saying, 'This isn’t what it was like.'"

Oldenburg worked on "War Remains" at Flight School Studio in Dallas, which developed the project. He gave WFAA a tour for this story.

Upon entering the building, we instantly spotted characters drawn in marker on an office wall.

“We are working on a video game," Oldenburg told us.

This is the kind of place where ideas sketched on a wall can become off-the-wall productions. As we continued, we saw a young man, whose head was covered in a virtual reality headset, moving strangely through a conference room. “He’s in a [virtual reality] game right now," Oldenburg said.

“Paul here is working on digital graffiti," Oldenburg told us as he handed us a spray paint can with a device attached to the bottom of it. “Push the button down [and] you will have a haptic sensation."

Indeed, it felt like the can was spraying paint. That creation is now part of an interactive fan exhibit in New York at the U.S. Open tennis championships.

Creating a new way to experience World War I required a new level of engagement and creativity. Flight School Studio started with photographs and mementos.

"There was so much loss of life on these battlefields that it was virtually impossible to return all of those little mementos," Oldenburg said. "And there were piles and piles and piles of letters, and photos and pocket watches that never made it back to their loved ones, so there was an opportunity in video game terms to have the ‘Easter Egg’ [reveal new items] throughout the experience. There’s a whole slew of photography that was specifically ripped and we tried to replicate."

They researched maps and descriptions of war conditions. They made sure the right types of artillery were being shown, that the texture of the shells was correct, that they simulated mud instead of dirt, and that the trench planks looked legit.

“Would there be this type of wood, and how wide would the boards be? We knew people who care are going to go through this and they will know if we are not accurate.”

They had the history. But they needed a way to immerse people in it. So, Oldenburg says, they build a mock war trench in their Dallas workspace.

“It started with cardboard."

Check out the time-lapse video as they tore it down and rebuilt it, again and again, each time making it more sophisticated. Eventually, they added textures, motion effects and tactile elements so that when it was finally finished, you can feel and touch what you see through the goggles.

Oldenburg says creating it all took his team to a new level.

RELATED: Family gets creative to share the thrill of riding a motorcycle for the first time

The creators wanted this to be personal because, for them, it is.

“My grandfather was mustard gassed in that war," Carlin revealed in our interview.

The guest book at the end of the experience suggests the personal touches were powerful. Visitors reported new connections with a war that ended more than a century ago:

“One of the most unique experiences I have ever had — so much respect for those who experienced it in real life.”

"Let’s hope VR helps the world remember. That is all it takes to avoid repeating history.”

“It has brought me together again with my grandfather — a WWI veteran who never spoke of it. I am speechless.”

The people behind "War Remains" can envision a future in which the exhibit could be used as a school classroom or a museum exhibit. Even if it doesn’t enter those realms, they believe we are close to a time when we will experience much more with the help of virtual reality.

Oldenburg predicts VR technology will come a long way in a short period of time and will become the way we experience momentous news events in the not too distant future.

“This is the AM radio transition to FM stage," he said. "Talk to me in a few years and it’ll be dialing into the THX and the Dolby Atmos [stage]. I like to think the next time we launch somebody — to another planet — we’re going to feel like we are in the cockpit with them.

"I’d like to think in the future, whoever is the next president, you could potentially sit across the coffee table from them while they give their address, versus feeling like you are separated…more personal, more approachable, more like you are there.”

The experience is now in Austin following a debut at the Tribeca Film Festival. Tickets are $40, and the schedule currently extends through mid-October.