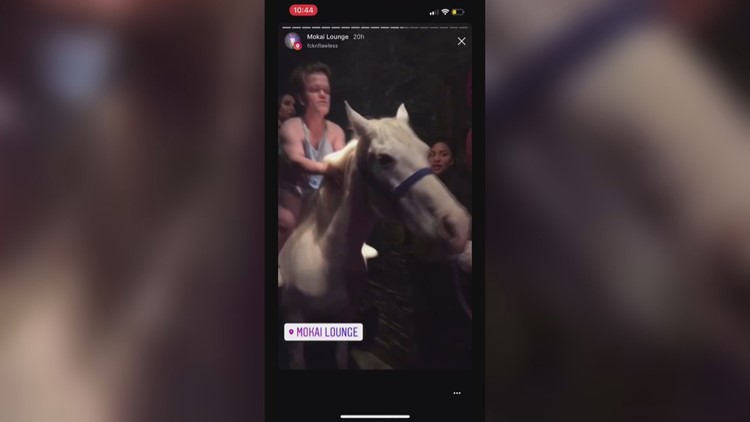 Photo by: Ixamar Palumbo
Authorities have since located the horse and deemed it to be &ldquo;healthy and safe.&rdquo;

MIAMI BEACH (CBSMiami) – A Miami Beach club has lost its license and a criminal case may come from a stunt involving a horse.

Authorities have since located the horse and deemed it to be “healthy and safe.”

At the Mokai club late Wednesday night or early Thursday morning, a horse carrying a man and a woman in a string bikini, was lead into the crowded nightclub.

“It’s a horse, a real horse,” a woman’s voice can be heard to exclaim on a cell phone video.

Ixamar Palumbo posted a video on Facebook which showed the horse’s entrance.

The white horse, out of its element and appearing uncomfortable, took a nasty spill on to the club’s hard floor, and knocking the woman off its back. People could be heard screaming, stunned as the animal struggled to get back on its feet.

The handler then tries to maneuver it out of the crowd.

WATCH: Mokai Lounge in Miami Beach under fire after video surfaced of a horse inside the nightclub pic.twitter.com/C7Saz3q20a

Joel Franco also posted a video of the fall on Twitter.

The video reached Miami Beach police who issued a statement which read, “We are very concerned over the allegations. As such we have launched a joint investigation with Miami Beach Code Enforcement.”

On social media, one angry poster declared “shame on you Mokai, #AnimalCruelty.”

CBS4 News reached club owner, Roman Jones, by phone. Jones denied any part in the incident with the horse.

“The horse is not hurt. The marketing director, who arranged the stunt, that I was unaware of, is suspended without pay. I am cooperating with the authorities,“ Jones told CBS4’s Gary Nelson.

But the incident involving the horse this week may not have been the first time the club has employed live animals to entertain it’s clientele.

Viewers sent CBS4 social media photos that on one occasion purport to show a camel being lead through the place, and another photo of a different horse in the club, with the name Mokai painted on its coat.

“I was disgusted and offended that any legitimate businessperson would think this was an appropriate action to take,” said City Manager Jimmy Morales. “This activity was not permitted, and as soon as we became aware, I immediately instructed staff to act swiftly in remedying this situation.”

“Animal cruelty is an abhorrent and vile act,” said Miami Beach Mayor Dan Gelber. “I fully support the immediate actions taken by the City Manager and his staff to ensure that this is remedied quickly.”