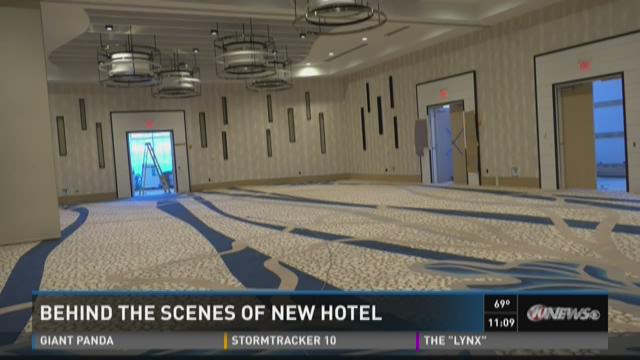 For the last two years, you have seen it rise from the pearl white sands. And 10News was invited inside the Wyndham Grand Clearwater Beach to show you what the inside of the largest hotel ever built on Clearwater Beach looks like.

"I would say we're 85 percent to 90 percent completed with our project," said Jessica Kendall, a representative with the resort.

Around 400 construction workers are laying carpet, finishing tile, working on wiring. There are 343 guest rooms in the 15-story north tower, and another 105 for Wyndham vacation ownership in the 15-story south tower.

"I was here last week and we did not even have carpet in the ballroom," Kendall said.

Meeting and ballroom space is the project's most important amenity. Over 20,000 square feet of meeting space will allow the hotel to hold banquets for up to 880 people.

"Meetings and group business are a very lucrative segment of our industry," said David Downing, Executive Director of Visit St. Pete Clearwater, which is watching the project closely.

Tourism accounts for $9 billion in direct economic impact in Pinellas County according to Downing.

The hotel will also be hosting a job fair Dec. 7-8 at its corporate sales office on Cleveland Street in downtown Clearwater, looking to hire 200 associates.

The resort should be open to guests around mid-January.