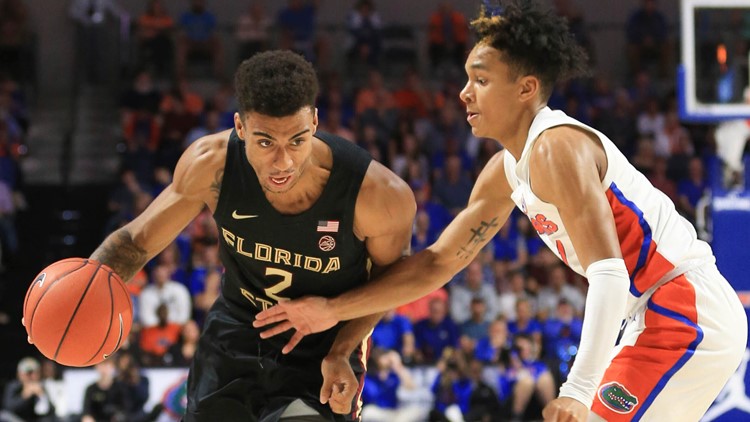 Are Florida and Florida St. locks for NCAA Tournament?

ST. PETERSBURG, Fla. — If you haven't checked a calendar at any point in the last week, make no mistake about it - this is March.

This weekend, the first five mid-major teams will punch their tickets to the big dance by winning their conference tournaments. For major conferences, there's still one more regular-season game before the conference tourneys.

For Florida and Florida State, it likely won't matter how the next nine days go.

Both teams look destined to play in the NCAA Tournament. The website teamrankings.com's Bracketology formula gives both the Gators and Seminoles a 100-percent chance to punch their ticket. By comparison, the same formula only gives South Florida a one-percent chance to make the tournament.

It's no surprise FSU is destined for the dance. The Seminoles are currently teetering holding firm on the 2-seed line.

Leonard Hamilton's team is 25-5 and sits atop the ACC standings along with Louisville. The Noles can clinch at least a share of the conference title with a win on Saturday against Boston College.

CBS' Bracketology expert Jerry Palm has Florida State headed to Amalie Arena for its first two games of the big dance as the No. 2 seed in the South regional despite their No. 3 ranking in the RPI.

For the Gators, the push for the tournament is a little cloudier.

Right now, Jerry Palm has Florida slotted in as a No. 9 seed headed to Omaha, NE.

But they've got a chance to strengthen their resume with a win this weekend when the Gators host Kentucky in Gainesville. The Wildcats have a top 20 RPI, so a victory would give UF a much-needed quadrant-one win.

Florida can finish anywhere from second to fifth in the SEC depending on other contests this weekend. A top-four finish would give the Gators a double-bye in the SEC Tournament, where they could continue to pad their resume even further.