The Buccaneers say they are taking the allegations "seriously." 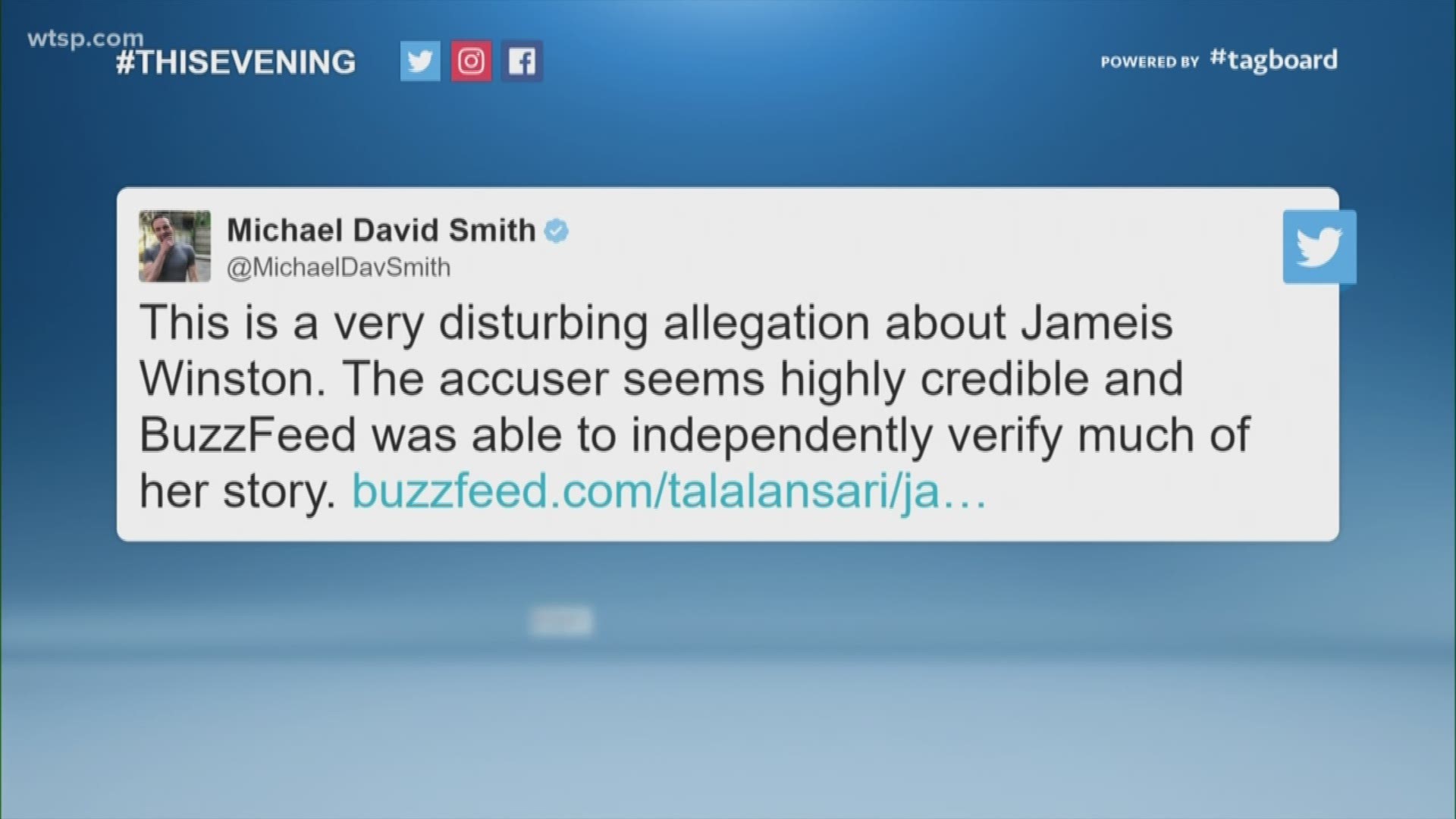 TAMPA, Fla. – The NFL is investigating an allegation that Tampa Bay Buccaneers quarterback Jameis Winston grabbed a female Uber driver’s crotch in 2016, according to a BuzzFeed report.

The report states Lisa Friel, who works as the NFL’s special counsel for investigations, sent a letter to the Uber driver on Thursday.

BuzzFeed reports the investigation stems from an early morning pickup on Sunday, March 13, 2016, in Scottsdale, Arizona. The Uber driver - who BuzzFeed identified only by her first name Kate - told BuzzFeed a small group of men told her she'd be chauffeuring Winston, who won the 2013 Heisman Trophy while at Florida State.

The Uber driver did not want to be identified for fear of negative attention and potential backlash from football fans, according to BuzzFeed.

Kate said Winston shouted homophobic slurs at pedestrians while sitting in the driver's seat as the Uber ride's only passenger. Winston then asked to stop for food.

While waiting at the drive-thru for Los Betos Mexican Food, "he reached over and he just grabbed my crotch," Kate told BuzzFeed.

Kate said Winston held his hand there for three to five seconds, and removed it after she looked up in shock, and said "What's up with that?"

Winston denied the allegations in a response posted to his Twitter account. Here is Winston's full statement:

"A news organization has published a story about me regarding an alleged incident involving a female Uber driver from approximately two years ago. The story falsely accuses me of making inappropriate contact with this driver. I believe the driver was confused as to the number of passengers in the car and who was sitting next to her. The accusation is false, and given the nature of the allegation and increased awareness and consideration of these types of matters, I am addressing this false report immediately. At the time of the alleged incident, I denied the allegations to Uber, yet they still decided to suspend my account. I am supportive of the national movement to raise awareness and develop better responses to the concerns of parties who find themselves in these types of situations, but this accusation is false. While I am certain that I did not make any inappropriate contact, I don’t want to engage in a battle with the driver and I regret if my demeanor or presence made her uncomfortable in any way."

"It is our understanding the uber driver was unable to identify the specific individual who allegedly touched this driver inappropriately,” Spielman told BuzzFeed. “The only reason his name is being dragged in to this is that his uber account was used to call the ride."

Winston reps: "We categorically deny this allegation. It is our understanding the uber driver was unable to identify the specific individual who allegedly touched this driver…The only reason his name is being dragged in to this is that his uber account was used to call the ride" https://t.co/r6vluOs40i

“We are in the process of obtaining further information regarding today’s media report. We take these matters seriously and are fully supportive of the investigation that is being conducted by the NFL.”

Kate filed a complaint with Uber soon after the ride. An Uber representative recommended Kate contact law enforcement as soon as possible, but she didn't go to the police for the same reasons she didn't want to be named in the BuzzFeed story. She is not seeking monetary compensation, according to BuzzFeed.

Winston, 23, sat out last Sunday’s 15-10 win over the New York Jets with a shoulder injury. Tampa Bay snapped a five-game losing streak in the win.

The Tampa Bay Buccaneers (3-6) will hit the road this weekend to take on the Miami Dolphins. Winston is not expected to play due to his injury.

Kickoff between the Buccaneers and Dolphins (4-5) is scheduled for 1 p.m. ET Sunday.