Hillsborough County deputies say the 4th leading receiver in team history was found dead Monday at a hotel in Brandon. 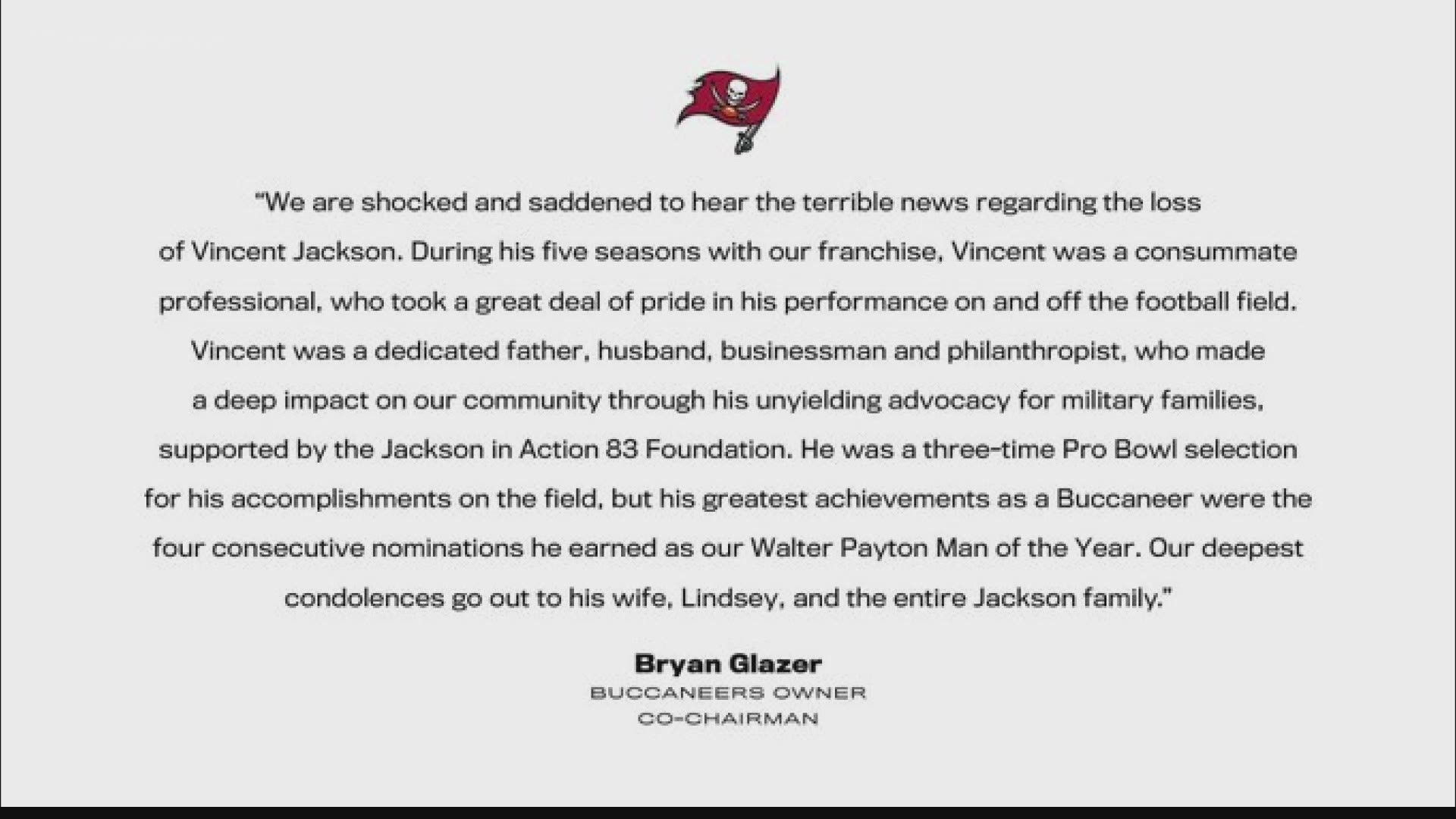 TAMPA, Fla — Fans in the Tampa Bay area, former teammates, and those who have crossed paths with former Buccaneers wide receiver Vincent Jackson are mourning his death.

Deputies say the Buccaneer great was found dead in his hotel room by a housekeeper three days after the sheriff's office closed a missing person case on him.

The hospitality entrepreneur, who gave back to his community through his Jackson in Action 83 Foundation, made a lasting impact on the Bay area.

Here's what the community is sharing about their time with a man who will be "remembered as one of the best players in Buccaneers franchise history."

"We are shocked and saddened to hear the terrible news regarding the loss of Vincent Jackson. During his five seasons with our franchise, Vincent was a consummate professional, who took a great deal of pride in his performance on and off the football field. Vincent was a dedicated father, husband, businessman and philanthropist, who made a deep impact on our community through his unyielding advocacy for military families, supported by the Jackson in Action 83 Foundation. He was a three-time Pro Bowl selection for his accomplishments on the field, but his greatest achievements as a Buccaneer were the four consecutive nominations he earned as our Walter Payton Man of the Year. Our deepest condolences go out to his wife, Lindsey, and the entire Jackson family," wrote Bryan Glazer, Buccaneers owner and co-chairman.

The team's GM said Jackson built his legacy in the community by always being there for military families.

Difficult day for all Bucs fans and family with this devastating news. V-Jax was a great Buccaneer who built his legacy in this community by ALWAYS being there for hundreds of military families. Thoughts & prayers are with his family as they cope with this loss. #RIP V-Jax. https://t.co/eCadhSDgQZ

Higgins sent his thoughts to Jackson's family and shed light on his charitable work when paying tribute to the former Buc.

Heartbreaking news. Sending thoughts and prayers to VJ’s family. His @JIA83Foundation’s efforts in our community, specifically with military families, was truly incredible. Grateful for all that he did for #TeamTampaBay. 🙏🏻

Higgins and 10 Tampa Bay anchor Ryan Bass spoke to Jackson in 2020 on the Tampa Bay 55 podcast about being a hospitality entrepreneur, having military roots and doing charitable work.

Jackon's namesake foundation shared about the loss and thanked the public for their condolences.

A statement from the Jackson in Action 83 Family on our beloved @VincentTJackson... pic.twitter.com/QpmlC1XYcT

The Super Bowl LV champ and career Buccaneer thanked Jackson for all he has done and sent prayers to his family.

V Jax thank you for everything I love you big bro. Praying for your family Rest in Paradise

Jackson's long-time teammate shared a touching tribute on Twitter for his friend, later adding "This one is hurting for real man!!"

Jack was more than a teammate to me, he was my friend. He was one of the first people to teach me the difference in a professional and a pro. More importantly he was a great man. He made it his mission to make others smile. Gonna miss you bro. Love you Jack! “The Ultimate Pro” 🙏🏾

Smith played with Jackson in Tampa Bay who tweeted "Nah, this can't be life WTF?!!!" as he first learned the news.

Swearinger played with Jackson in 2015 and sent prayers to his family.

🤦🏾‍♂️ My Goodness, may God be with your family Vincent Jackson! Rest In Peace! Og was a helluva teammate & a great guy frfr! Man I’m Praying for your Family 🙏 .

”We’re in shock along with the rest of the Tampa Bay and NFL community. Vincent was a professional on the field and a champion in our community. Our thoughts and prayers are with his family and loved ones.”

Jackson's alma mater paid tribute to "one of the greatest Bears of all time."

Rest in Peace to one of the greatest Bears of all time 🙏 🐻🏈 pic.twitter.com/yRsONSsbPB

The Bay area mayor shared his memories of getting to know Jackson who he described as a "bright light."

I do not know the circumstances surrounding Vincent's passing, just stunned that such a bright light is gone. Getting to know him, work with him and bring a message of kindness to our schools, has been a highlight for me. We loved him as a person and a player and will miss him. pic.twitter.com/vwHRyMoAaP

“We are deeply saddened by the loss of Vincent Jackson. His contributions to our community as a former Buccaneer, businessman and philanthropist are beyond reproach, and his legacy will live on through the countless lives he touched. Vince’s family and friends are in our thoughts during this difficult time.”

O'Neil paid tribute to Jackson on Twitter, calling him both a good man and a great friend.

RIP TO A GOOD MAN and a Great Friend #VincentJackson pic.twitter.com/GXZVrXteQ0

King sent his prayers to Jackson's family during this time as he was shocked to learn the news.

Shocked I mean just shocked prayers with the Jackson family 🙏🏾