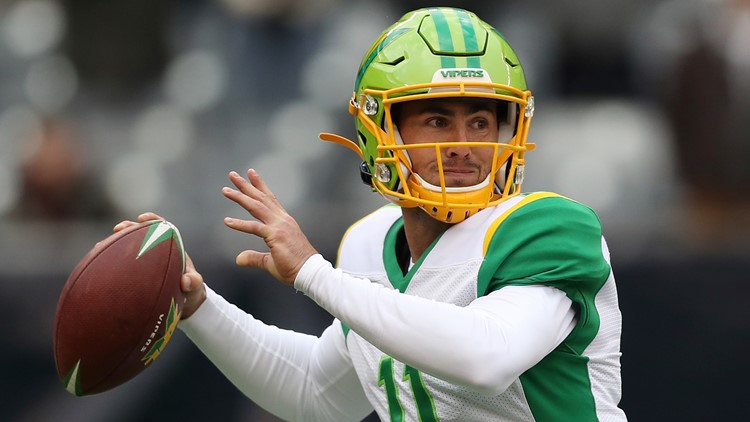 Vipers quarterback Murray out for week 2

ST. PETERSBURG, Fla. — After a poor performance in the Vipers' week 1 loss to the New York Guardians, some fans turned to a classic fan approach to their team's problems - bench the quarterback.

In week 2, they'll get a different QB. But, not because of performance.

Tampa Bay's top-draft pick and week 1 starter Aaron Murray will watch Sunday's game against the Seattle Dragons from the sideline thanks to a lower-foot injury.

According to the team's website, Murray got hurt late in the first half of last Sunday's game. The medical staff examined the foot shortly after and allowed him to continue.

But, it proved to be worse than originally thought as Murray never found his footing in the second half.

The former UGA star struggled getting the offense going and turned the ball over twice in the game's final 30 minutes.

In his place, the Vipers will likely turn to both former USF star Quinton Flowers and former Oklahoma State QB Taylor Cornelius to handle the snaps.

Cornelius threw for a little under 4,000 yards in his one season starting in Stillwater before going undrafted in last year's NFL Draft.

Flowers is more of a do-it-all style quarterback. Listed on the Vipers roster as both a quarterback and running back, Flowers bloomed in his limited action as a runner against the Guardians. The former Bulls star showed the same speed and agility he flashed during his time at USF.

Trestman has kept the team's plans under center quiet so far this week. If he does turn to Flowers, it could end up being a USF reunion.

The Dragons starter Brandon Silvers injured his leg late in Seattle's week 1 loss to the DC Defenders. Another former South Florida star, B.J. Daniels, finished the game. Though Silvers practiced full on Friday and is listed as probable on the team's injury report.

The Vipers and Dragons battle to get their franchise's first-ever victory Saturday at 5 p.m. in Seattle.