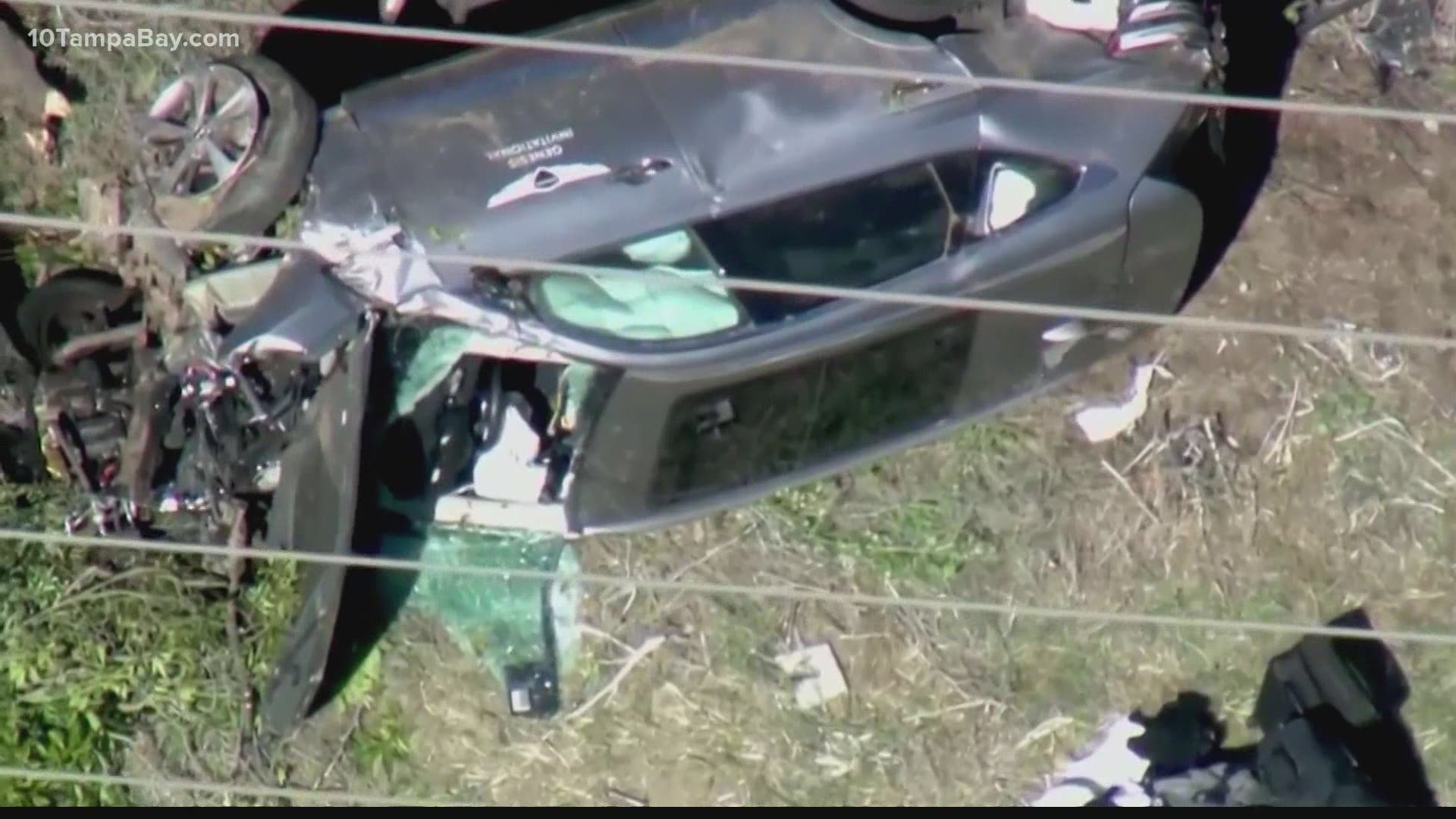 The Los Angeles County Sheriff's Department says firefighters and paramedics had to pry Woods' car open on the border of Rolling Hills Estates and Rancho Palos Verdes. Originally, reports said the "jaws of life" were used to pry the vehicle open. Authorities say that was incorrect.

He was the only person inside the car.

Citing his agent, Golf Digest reports Woods suffered "multiple" leg injuries and was undergoing surgery. The publication says the 45-year-old had been in California for a "two-day content shoot" with Golf Digest and Golf TV after hosting the PGA Tour's Genesis Invitational this past weekend. The shoot was part of a documentary that featured Dwayne Wade and David Spade, according to CBS Los Angeles.

During a press conference, authorities said Woods was conscious and speaking when crews arrived. They say it is not yet know if he suffered any life-threatening injuries.

At the moment, authorities say there is no evidence of Woods being impaired while driving.

"Get well soon, Tiger. You are a true champion," former President Donald Trump wrote in a statement.

The PGA Tour released a statement, too, writing: "We have been made aware of Tiger Woods' car accident today. We are awaiting further information when he comes out of surgery. On behalf of the PGA Tour and our players, Tiger is in our prayers and will have our full support as he recovers."

Woods last competed on Dec. 20 in Orlando, then underwent a microdiscectomy. On Sunday, he spoke to CBS' Jim Nantz about his recovery and said that he wasn't sure whether he'd be able to play in the Masters in April.

"Barbara and I just heard about Tiger’s accident, and like everyone else, we are deeply concerned," golf legend Jack Nicklaus wrote in a statement. "We want to offer him our heartfelt support and prayers at this difficult time. Please join us in wishing Tiger a successful surgery and all the best for a full recovery."

Woods currently lives in Jupiter Island, Florida – one of the wealthiest zip codes in the world – where he owns a multi-million dollar mansion.

Florida is not only home for the 15-time majors champion but also the place where his historic legacy began.

More than two decades later, the sunshine state was the stage for Woods' comeback tour back in 2018. During the Valspar Championship, Woods tied for second-place. At that point, it was his first top-five finish in nearly five years.

Of course, Woods' residency in Florida did not come without controversy. In 2009, Woods infamously took a break from professional golfing after crashing his SUV while driving from his Orlando mansion. The incident marked a low point in his career as rumors of extramarital affairs, which he later would confirm, surrounded Woods during that period of time.

Eight years later, in his new home in Jupiter, Woods was again involved with police after being arrested for driving under the influence.