MIAMI  – History has been made. Miami Jackson has made a big splash in filling its previously vacant job of head football coach. 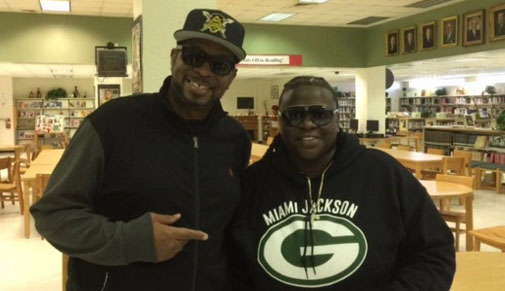 Miami Jackson has made a big splash in filling its previously vacant job of head football coach.

Jackson announced the hiring of Lakatriona "Kay Kay" Brunson to be its next head football coach and Luther "Uncle Luke" Campbell as associate head coach and defensive coordinator Monday afternoon in a press conference in the school's media center.

Brunson replaces former NFL pro and University of Miami alum Earl Little, who led the Generals to a 9-11 record during his two-year tenure at Jackson – going 3-6 in 2015.

Brunson is best known for her role as "Bernice" on the truTV reality series "South Beach Tow."

But she does have an athletic background.

She is an alumnus of Northwestern, where she was a member of the track and field team – shot put and discus thrower – as well as playing basketball for the Bulls.

Brunson then went to college at Tennessee State University, where she played basketball and later played football for the Miami Fury in the Independent Women's Football League.

Brunson is a full-time physical education teacher at Jackson, as well as serving as an assistant coach on the basketball team and serving as the head coach of Jackson's flag football team – an FHSAA sanctioned all-girl sport.

Still, many will view Brunson's potential hiring as either – or both – a publicity stunt or just a titular hire as Campbell and other coaches would handle the actual football coaching.

But it couldn't be further from the truth according to Brunson.

"Today is historic," Brunson said. "We're here to change the atmosphere at Miami Jackson and get some W's on the board. I know I'm a woman, but I know that I can do the job here. You all just [wait] around for it…big things are going to happen here."