Kentucky Derby is back! Louisville businesses, city leaders ready for the return of watching horses 'Run for the Roses'

Tourists are steadily trickling back into downtown hotels, restaurants and museums in time for the 147th Run for the Roses on May 1. 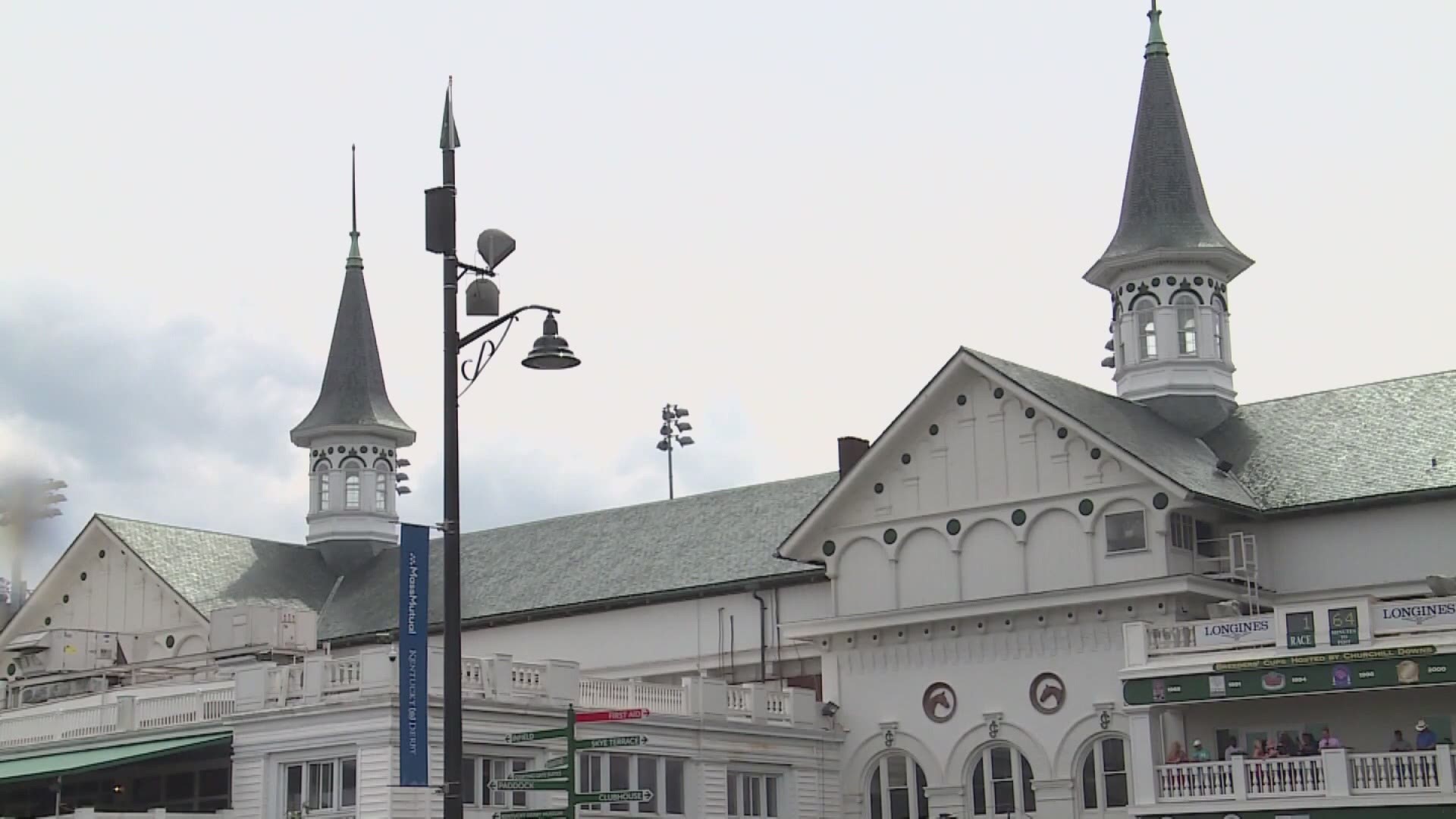 LOUISVILLE, Ky. — The Kentucky Derby is back on the first Saturday in May, slowly bringing with it the sights, sounds and rituals familiar to Louisville.

And local officials and business owners are hopeful that translates into a better cash flow after the coronavirus pandemic upended Derby’s schedule last year.

The Thunder Over Louisville air show and fireworks display that kicks off Derby activities resumed with resounding booms last weekend. Marathons and cycling races, conducted virtually last fall, went off live this weekend, along with thousands of yellow rubber ducks bobbing in the Ohio River in the “Ken-ducky” Derby.

Tourists are steadily trickling back into downtown hotels, restaurants and museums. The most anticipated scenes loom in Saturday’s 147th Run for the Roses at Churchill Downs with women in big colorful hats and men in seersucker suits, occasionally pulling their required face masks aside to sip bourbon and mint juleps and puff on cigars.

“It definitely smells like Derby,” said Louisville native Kenzie Kapp, who owns a business that makes headpieces and is relishing a boost in demand for masks to match her hats and fascinators.

“In the fall, it was different. It’s so good to be back on the first Saturday of May. That feels good. It feels right. It feels at home.”

Social distancing guidelines will spread out the crowd beneath the Twin Spires and infield, a stark contrast to last fall’s spectator-free Derby that was pushed back to Labor Day. By any measure, it’s an encouraging sign of a return to normalcy for horse racing’s biggest event and its hometown.

This year’s economic impact on the region is estimated at $34.6 million, less than a tenth of the typical $400 million the event generates. Capacity for both the Kentucky Oaks and the Derby at Churchill Downs is limited to 40% to 50% for reserved seats and up to 60% in certain private areas. About 15,000 fans will be allowed in the infield, with total attendance around 45,000.

While those projections are 100,000 below normal, that’s still enough to revive hopes for businesses hurt last spring by the Derby’s first postponement since 1945.

“There is still excitement and brand awareness associated because it’s such a big tradition,” Louisville Tourism spokeswoman Rosanne Mastin said of the Derby. “It may not be the 100% capacity that we are used to, but we are fortunate. We will still realize some of the economic impact from what is usually Louisville’s largest tourism generator.

“We are happy to have some (impact), since we really didn’t have any previously for last year. Some is better than none.”

Credit: Jessa Mayhew via AP
FILE - In this undated photo provided by Jessa Mayhew in April 2020, hat maker Kenzie Kapp models one of her fascinator designs for the Kentucky Derby in Louisville, Ky. The Kentucky Derby is back on the first Saturday in May 2021, slowly bringing with it the sights, sounds and rituals familiar to Louisville. And local officials and business owners are hopeful it translates into better cash flow after the coronavirus pandemic upended the Derby’s schedule the previous year. “It definitely smells like Derby,” said business owner and Louisville native Kapp, who’s relishing a boost in demand making masks to match her hats and fascinators. (Jessa Mayhew via AP)

Occupancy has topped 60% among the region’s 21,000 hotel rooms, with several venues sold out. Luxury hotels such as the Omni Louisville are enjoying Derby’s return, no small matter considering rooms run about $1,999 per night with a three-night minimum.

To that end, Omni general manager Eamon O’Brien has several Derby-themed events planned at the 3-year-old venue, the city’s third-tallest building. It has partnered with high-end distiller Woodford Reserve for a lounge and will host concerts with musicians and a DJ.

“We’re just excited and thankful that we’re going to have an event here this year and actually have fans here that we can serve and take care of,” O’Brien said.

Things are steadily coming back to life at other downtown venues, a trend businesses hope extends beyond the Derby.

While COVID-19 guidelines have limited tour group numbers to six at the Evan Williams Bourbon Experience on Whiskey Row, Heaven Hill Distillery visitors experience director Jeff Crowe said tours are booked through the end of May. Its bar and retail space has increased, boosting business at its On3 bar.

“Our phones are ringing off the hook,” said Crowe, who also touts the company’s staff retention to other assignments such as hand sanitizer production and online tastings.

At Churchill Downs, Jonathan Blue can’t wait to fire up cigar sales as the track’s partner after missing out when fans weren’t allowed. The co-owner of the Liquor Barn said the statewide chain realized a surprising boost through liquor packages for home parties, but he’s curious to see how mask mandates will affect sales and enjoyment.

One certainty, Blue notes, “If someone wants a cigar, they’ll be able to get access.”

Attendance at the Frazier History Museum began to increase in March as more people were vaccinated. Event bookings are also up at the site that highlights Kentucky tradition and legacy, particularly its signature whiskey.

Museum president and CEO Andy Treinen noted that there’s a way to go before the Derby buzz matches pre-pandemic levels. But the energy is building, with Louisville and Kentucky standing to benefit in the long run.

“It’s like, that is the month every year where you get to see the people that you see once a year and can celebrate with,” Treinen said. “You may see them more times a year, but that is the time of celebration. We’re inching back toward that, and that’s what makes the state of Kentucky feel special at Derby time.”