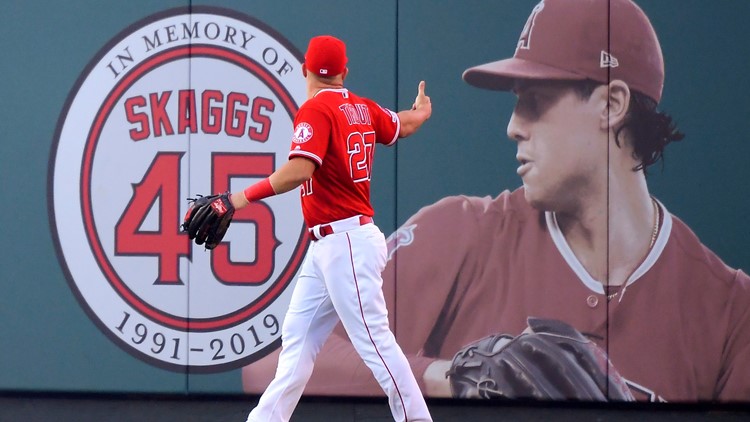 Photo by: AP
Angels center fielder Mike Trout gestures toward a photo of Tyler Skaggs prior to a baseball game against the Tigers, Monday, July 29, 2019, in Anaheim, Calif. Skaggs passed away on July 1st. (AP Photo/Mark J. Terrill)

Opinion | Learn from, don't judge, Tyler Skaggs' cause of death

ST. LOUIS — Reacting to an untimely death creates a bevy of emotions, whether or not you knew the person or not. One of the reasons for that is that in death, the revelations that occur as a result can be bittersweet.

Tyler Skaggs, who was a pitcher for the Los Angeles Angels when the team visited St. Louis in June with the Albert Pujols spectacle in tow, was found dead in his hotel room less than a week later. Skaggs was young, known to be a great person who enjoyed life and the game and generally wasn't the person you'd expect this to happen to.

So when the autopsy report showed traces of fentanyl and oxycodone along with alcohol in his system at the time of his death, showing Skaggs died as a result of an accidental drug overdose, people's reactions were all over the place.

RELATED: Pitcher Tyler Skaggs had fentanyl, oxycodone in his system when he died, autopsy shows

There were people disregarding a man's life and just slamming him for a poor choice. Some were just sad, wrestling with the horrible misfortune of a professional athlete losing a battle with drugs again. Others volleyed between the two, trying to find some true stance on the subject.

Here's the thing. It's easy to condemn Skaggs for a poor choice in judgment and action, but I won't do it. Over the years, I have slowly understood the reasoning behind someone's death isn't as cut and dry as one sentence.

It's not a kid's book. Everybody around Skaggs can confirm that he didn't use these drugs frequently or that this was an addiction. The family's statement revealed that the drugs found in his system were surprising to say the least. "That is completely out of character for someone who worked so hard to be a Major League Baseball player," the statement said.

The statement also included that an Angels employee could have been involved in the death, as in supplying Skaggs potentially with the deadly drugs.

Fentanyl and oxycodone are opioids prescribed to treat moderate to severe pain. They are highly addictive and can be lethal if taken in certain doses. We may never know if it was a fellow teammate or one of the team physicians that played a part in Skaggs' demise. It's very murky and there's a chance the entire truth will never make it out to the public.

So just do everyone a favor and hide the hot-take theories. A young man took a bad mix of drugs and died, leaving his family and friends in cold, hard grief for the duration of their lives.

It doesn't matter to them that drugs were the cause; Tyler remains gone no matter what happened. They don't get a pass on grief just because he made a bad choice in his last hours.

What is important is taking away the lesson that has been unfortunately served many times in recent years. St. Louis Cardinals fans learned the hard way when drugs and alcohol played a part in the deaths of Josh Hancock in 2007 and Oscar Taveras in 2014. Young men who made poor choices and paid the ultimate price. Those deaths and Skaggs' demise should reinforce the deadly urge that drugs can have on athletes, no matter what age they are.

It's not just high school and college dealing with their first over-the-counter extreme drug. Fully grown professional athletes playing at the highest level are susceptible to the allure, availability and addiction of these narcotics. Skaggs is just the latest.

Perhaps some policing of the drugs' distribution could be a good start.

Joe Schwarz, pitching analyst for The Athletic and a full-time pharmacist, pointed out that there needs to be a crackdown on how powerful opioids reach the public.

Once again, there's a lot of threads that should emerge from Skaggs' death, but shouting at his legacy, grave, or character does NO ONE any good. Save it. All it does is trickle down to the family's attention, and they don't need that right now. They don't need hot-take landmines from strangers telling them who their son, brother, or husband was. Save it for your basement podcast and water cooler chat.

Just try to quietly learn from it. Talk to your kids about the dangers of it. Discuss it with your family. Make it a point of interest to strip a tragedy down to its true essence, taking something away that is useful other than, 'what's wrong with him?!'

Question the team employees. Question the current ethics and regulations in the medical field. Question a lot of things. Let Skaggs rest in peace.

Maybe, just maybe, a few lives can be saved in the future. That's how you preserve a legacy and help the future at the same time.

RELATED: How Kolten Wong is silencing the doubters, turning his game into a must-watch event

RELATED: 5 takeaways from the Cardinals' doubleheader sweep of the Reds