What will the relationship between quarterbacks Tom Brady and Kyle Trask be like?

Buccaneers second-round draft pick Kyle Trask has a shot at backing up the greatest of all time, Tom Brady. 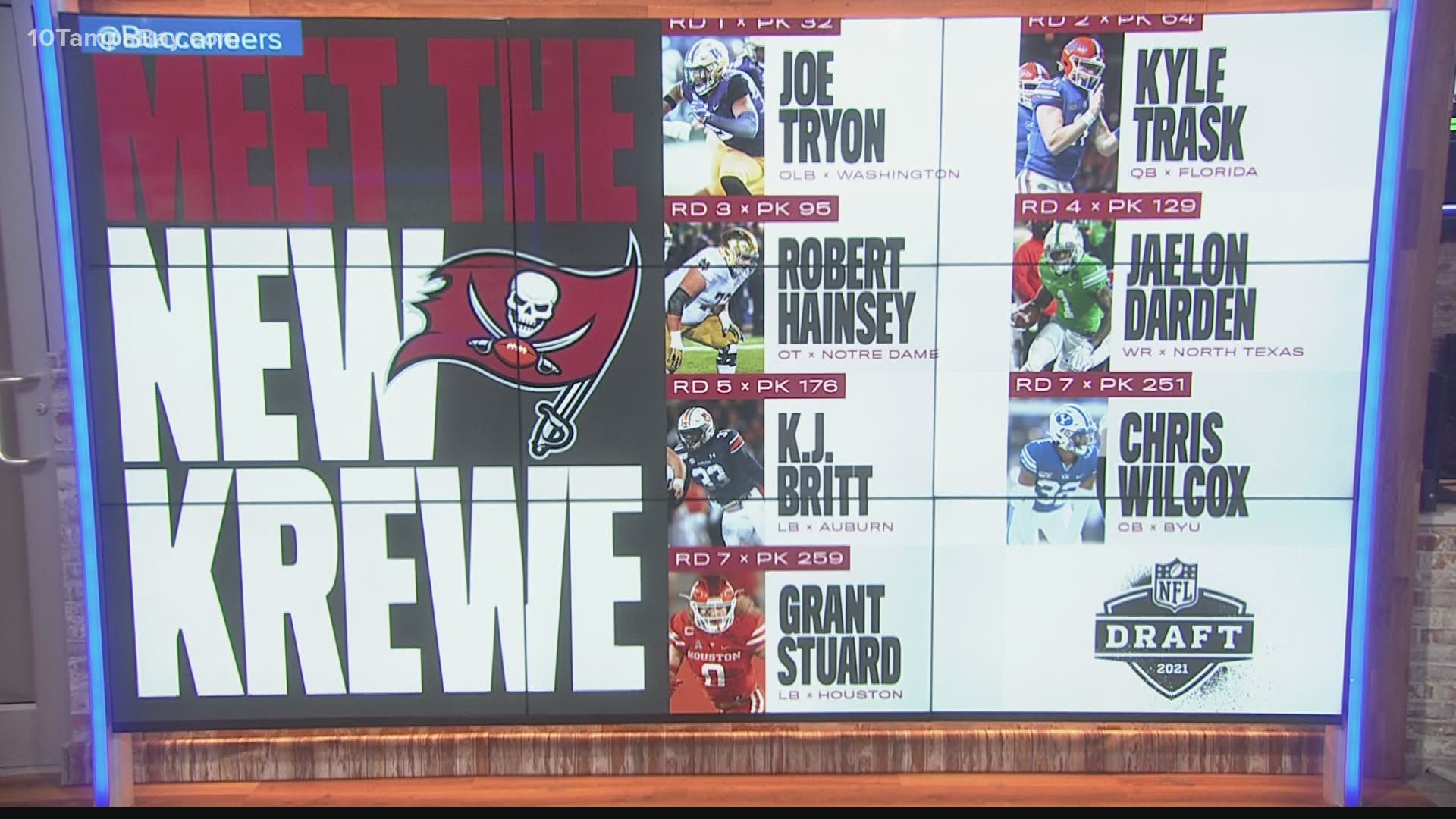 TAMPA, Fla. — There has been plenty of reaction surrounding the 2021 NFL Draft class for the Tampa Bay Buccaneers.

To kick off the week, on Monday, my Locked On Bucs Podcast co-host James Yarcho and I dove into our own thoughts on the class. Since then, Zac Blackerby (Locked On Auburn), Brandon Olsen (Locked On Gators), and Cindy Olsen (Locked On Pac-12) have all stopped by the show to share their thoughts and tell us what to expect from some of this class.

It’s been mostly good things, even for day-three linebacker K.J. Britt, who is largely considered a run stopping defender with limited ability against the pass but did look improved in that area during the 2021 Reese’s Senior Bowl.

I could think of no better way to end the first week of post-draft reactions than with one of our favorite guests, Carmen Vitali, staff writer for Buccaneers.com. As expected, the conversation centered mostly around the futures of these rookies, rather than the present-day opportunities limited by joining a stacked Super Bowl roster.

The future of one player seemed to captivate a lot of Bucs fans watching the draft last weekend, and that was the selection of quarterback Kyle Trask. While it’s clear the team doesn’t expect Trask to start in 2021, or even 2022 for that matter, there is a clear eye on his potential as a starter in the future.

Helping him reach that goal, of course, will presumably be Tom Brady, only the best in the business. It was mentioned that Brady even knew about the selection beforehand and approved of it, even if not as a decision-making authority, but a respected leader on the team.

The question always remains in these situations whether or not the veteran is interested in mentoring the rookie, something Vitali spoke about with me on the show.

“People have this kind of narrative around Tom, I think, because of the New England [and] the Jimmy Garoppolo years, that he’s not necessarily a mentor,” Vitali said. “But that is literally the reason Tom is still playing at 43. He loves being a mentor. He loves being part of a team. All he talked about this past season was how much he appreciated getting to essentially bring along some other guys and to mentor his teammates, and to be that source of experience for them.”

If you don’t know what Vitali was referencing there about New England and Jimmy Garoppolo, back in 2017, the younger quarterback was traded to the San Francisco 49ers for a second-round in the 2018 NFL Draft.

The deal gave San Francisco a quarterback they nearly won a Super Bowl with, and the Patriots turned the pick they got into a whole bunch of other moves.

A few months after the trade went down, it was reported by Seth Wichersham of ESPN there was tension brewing in New England involving the team, their legendary quarterback, Alex Guerrero, and of course, Jimmy Garoppolo, more over Garoppolo’s rise in the eyes of many as a rising starting caliber quarterback in the NFL.

Of course, this then led to reports Brady himself was a main catalyst behind Garoppolo being traded in the first place. Boom, now Brady is a veteran quarterback not interested in mentoring younger players.

While Vitali refutes this as the case now, since she has no basis to know personally whether or not Brady didn’t want to mentor the young Garoppolo, there is a source we can turn to about the relationship between the two. Yes, Tom Brady is one of course, but also, Jimmy G. himself.

And sometime after the 49ers made Trey Lance their top selection in the 2021 NFL Draft, Garoppolo told ESPN Radio, “It’s kind of coming full circle. You go through this NFL career and you start as a young guy coming in. Tom kind of showed me the ropes. The competition between us was awesome. It really made me grow as a rookie and as a young player. So, that’s kind of what me and Trey, we’ll mold our relationship into that.”

Brady may not have been thrilled to have the young gunslinger behind him when he felt he had much more to give to the game (which it turned out he did) but it doesn’t sound like Garoppolo feels like he was cast away by him either.

RELATED: What could quarterback Kyle Trask's future be in Tampa Bay?

That was then, and this is now though. Brady is older and has even recently acknowledged the end of his NFL days are coming. So, what about the younger Trask?

“He [Brady] actually did reach out to me a couple days after the draft and was just checking in on when I’m gonna get into town so we can get together and maybe do some throwing and things like that,” Trask said Friday on NFL Network’s NFL Total Access. “It meant a lot to me. Not only Tom, but a couple other guys have reached out. You can definitely tell they have a great culture and a great group of people in this building and I can’t wait to get started.”

Jimmy G. backed up the G.O.A.T and became a Super Bowl quarterback for another team. It looks like Kyle T. is going to back up the same player, and perhaps have a shot at taking the wheel when it’s time for the legend to fade into the sunset. And he’ll do so with the full support of the best teachers he could ever ask for.

For more on this story, to hear Vitali’s full take on the entire draft class, and for more on the Tampa Bay Buccaneers, check out the Locked On Bucs Podcast.