Game 3 is set for Friday night in Montreal. The Lightning now lead the series 2-0. 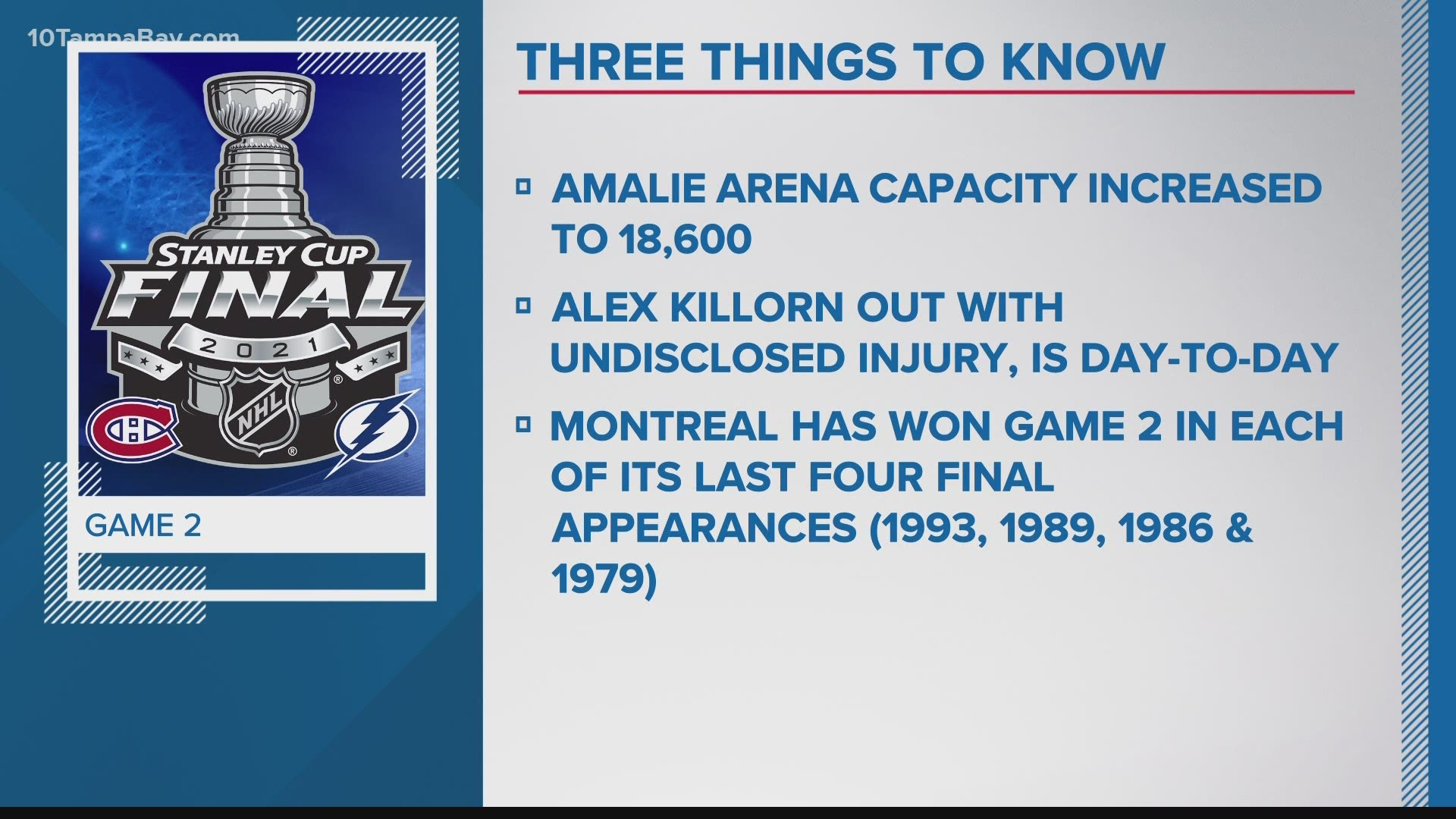 TAMPA, Fla — The Tampa Bay Lightning lead the Stanley Cup Final two games to none after beating the Montreal Canadiens 3-1 on Wednesday night.

Andrei Vasilevskiy made a playoff career-high 42 saves to keep the defending champions in the game, but it was Blake Coleman who stole the show.

With just 0.3 seconds left in the 2nd period and the game tied, Coleman scored the game-winning goal on a highlight-reel diving shot.

Anthony Cirelli opened the scoring for the Lightning earlier in the 2nd period, and Ondrej Palat provided an insurance goal in the 3rd.

The Canadiens outshot Tampa Bay 43-23 and was the better team for much of the night. But the Lightning were able to beat Carey Price three times and showed they can lean on great goaltending and score opportunistic goals much like the Canadiens.

With the Lightning now leading 2-0, Game 3 is Friday night in Montreal.

The Tampa Bay Lightning are back on the ice tonight as they take on the Montréal Canadiens in Game 2 of the Stanley Cup Final.

The Lightning are coming off an impressive first game victory, beating out the Canadiens 5-1. Nikita Kucherov scored twice, with Erik Cernak, Yanni Gourde and Steven Stamkos also finding the back of the net.

Montréal is a hungry franchise looking for their first Championship since 1993. The Lightning are going for their third since 2004.

Monday night was the first time in franchise history the Lightning won the first game of the Stanley Cup Final.

Last year, the Lightning brought home the cup for the second time ever but lost Game 1 to the Dallas Stars.

Tampa Bay has a team that knows the feeling of winning the cup and they don't want to give it up quite yet.

"[We] used that experience that we had last year in terms of you know fulfilling your ultimate dream of winning the Stanley Cup and realizing how amazing that feeling is and knowing how hard it was to accomplish that," Captain Steven Stamkos said Sunday morning.

The capacity for the Stanley Cup Final games has been increased to 16,300 fans at Amalie Arena.

From where to score swag, to answering the most asked questions, 10 Tampa Bay has everything you need to know about the Lightning and the Stanley Cup Final.

Plus, you can join in on the conversation by following us on Twitter.

Lightning have announced they will increase capacity to 16,300 fans for the Stanley Cup Final #GoBolts