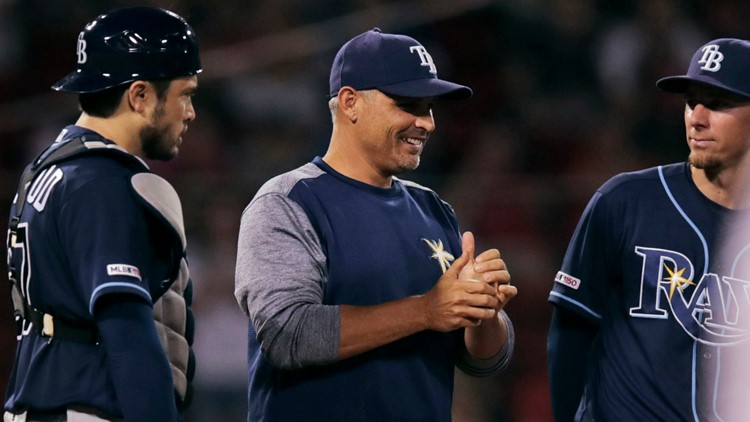 Photo by: AP Photo/Charles Krupa
Tampa Bay Rays manager Kevin Cash smiles as he talks with his players during a pitching change in the seventh inning of the team's baseball game against the Boston Red Sox at Fenway Park in Boston, Wednesday, July 31, 2019. (AP Photo/Charles Krupa)

Tired of frequent pitching changes? So is MLB.

ST. PETERSBURG, Fla. — Peanuts, cracker jacks and the manager's long, slow march to the mound to take the ball from one pitcher and hand it to the next as he jogs from the bullpen a few hundred feet away.

All three are staples of baseball. The salty snacks typically add to the fan experience. But, nothing has dragged down the game like the recent shift in bullpen strategy.

Wednesday, MLB announced a new rule requiring all pitchers to face at least three batters or get out of the inning before the manager can make a change.

The rule does come with an injury exception. If the pitcher gets hurt and the umpire crew chief agrees he can no longer continue pitching, the manager can make a change before the three pitcher minimum.

The new rule likely won't mean much for the Rays' opener strategy used often over the past two seasons. In 2019, relievers making spot-starts for Tampa Bay faced at least three batters in all of their opening appearances.

The biggest difference will likely be felt at the end of games when managers often use left or right-handed specialists to get them out of key situations.

The league is also making a tweak to its roster limits that could pay major dividends to Major League teams.

The clubs will now be able to carry a 26th active player on their roster with a maximum of 13 pitchers. In September, teams will be able to add two additional players to the active roster with a limit of 14 pitchers.

The extended rosters will allow managers an extra bat or arm to help them keep players fresh throughout the long Major League season.

The three-pitcher minimum rule will go into effect during Spring Training on March 12. The other changes will start at the beginning of the regular season.

RELATED: The Rays throw another curveball, but St. Pete's mayor is playing hardball