The number-one seeds from both leagues will face off for the first time since 2013. 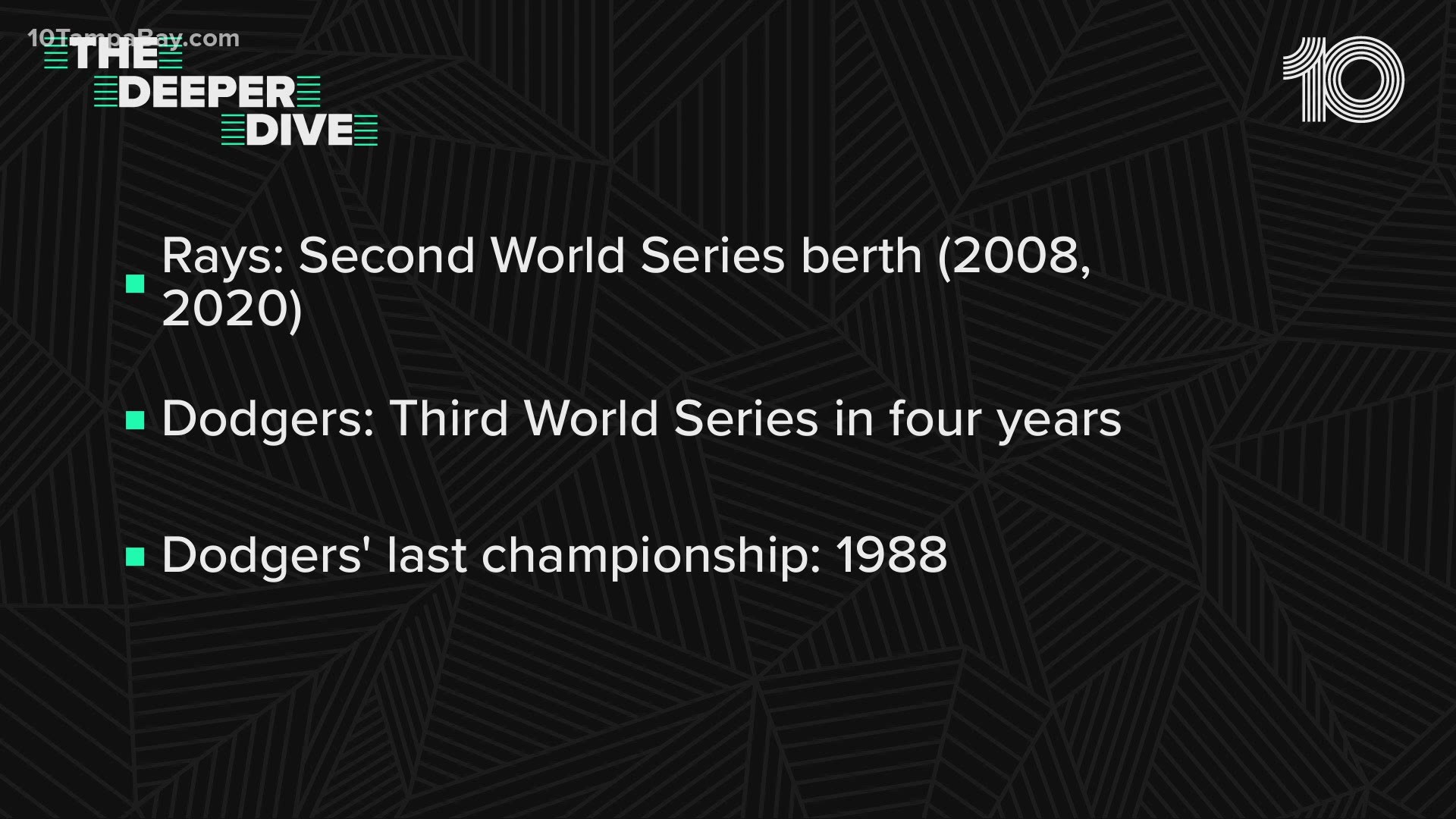 ST. PETERSBURG, Fla. — The stage is set for the 2020 World Series. The Tampa Bay Rays, with Major League Baseball's fourth-lowest payroll, will battle the Los Angeles Dodgers, who come in with the second-highest player salaries.

The Rays knocked out the Houston Astros in Game 7 of the American League Championship Series Saturday night. The Astros overcame a 3-0 series deficit to tie it, but Tampa Bay's pitching shut Houston's lineup down in the deciding game.

The Dodgers went down 3-1 to the Atlanta Braves in the National League Championship Series, but rattled off three straight wins to claim the pennant.

How they got here

The Rays (40-20) and the Dodgers (43-17) each finished with the best record in their respective leagues. This marks the first World Series matchup of number-one seeds since 2013, when the Boston Red Sox defeated the St. Louis Cardinals.

Tampa Bay swept the Toronto Blue Jays in two games in the Wild Card round, then survived a grueling Division Series with the Yankees before going the distance in the ALCS. The Dodgers swept both the Milwaukee Brewers and the San Diego Padres to get to the NLCS, where they had a tougher time getting past the Braves.

The Rays are relative newcomers to MLB and to the World Series. They reached the Fall Classic once prior to 2020, in their 11th season in 2008. Tampa Bay fell 4-1 to the Philadelphia Phillies, in a series hampered by fatigue and bad weather. The Rays appeared in four more postseasons from 2010-19, but failed to make it past the ALDS each time.

The Dodgers, meanwhile, have a decorated history of World Series berths. They've played in 21 of them dating back to 1916, when the franchise was located in Brooklyn. But they didn't win a championship until 1955. Their most recent title came in 1988, the year in which Kirk Gibson hit his famous home run off Dennis Eckersley to win Game 1.

These days, L.A. is feeling like the Brooklyn Dodgers of old, coming close but not getting the job done. They've reached the playoffs in each of the last eight seasons. The upcoming World Series will be their third in four years. But they lost in seven games in 2017 to the Astros, in a series many consider tainted due to Houston's sign-stealing scandal. The Dodgers also lost in five games to the Red Sox in 2018.

Comeback complete. LA is in the #WorldSeries again. #CLINCHED pic.twitter.com/gLezaZnK7Z

Given that the Rays are in the AL East and the Dodgers play in the NL West, they rarely get to face each other. They played 17 games head-to-head from 2002-2019. The Rays are 7-10 all-time against the Dodgers, including a 2-2 split last season.

While the matchup is uncommon, the Rays own a piece of history at the Dodgers' expense. On June 11, 2002 at Tropicana Field, third baseman Jared Sandberg became the Rays' first player to hit two home runs in the same inning.

There are a lot of differences between the Rays and the Dodgers. But one thing they have in common is solid pitching.

Tampa Bay's rotation boasts 2018 Cy Young winner Blake Snell, along with veteran righty Charlie Morton and young gun Tyler Glasnow. The Rays' bullpen has earned the nickname "the Stable," stemming from a comment manager Kevin Cash made after an on-field scuffle with the Yankees in September.

The Dodgers' starters can match up with any other team in the game. They're led by eight-time All-Star Clayton Kershaw, who is trying to overcome his noted postseason struggles. Behind him are Walker Buehler, Julio Urias and Dustin May, all of whom turned in strong seasons.

Meanwhile, the Rays' lineup relies heavily on young talent. Their leading hitter this postseason is rookie outfielder Randy Arozarena, who has already set the rookie record with seven playoff home runs. The Dodgers are stacked with higher-priced veteran talent such as Mookie Betts, Cody Bellinger and Corey Seager. Time will tell whose hitters swing the bats better when they meet up.

Game 1 of the World Series starts Tuesday night at 8:09 at Globe Life Field in Arlington, Texas. A limited number of fans will be allowed in with COVID-19 safety measures in place.