Durham Bulls pitcher shares update on recovery, 2 weeks after being hit on head by baseball

In a series of tweets, Tyler Zombro said he is "in a very fortunate position all things considered" and thanked the Durham Bulls and Tampa Bay Rays for the support. 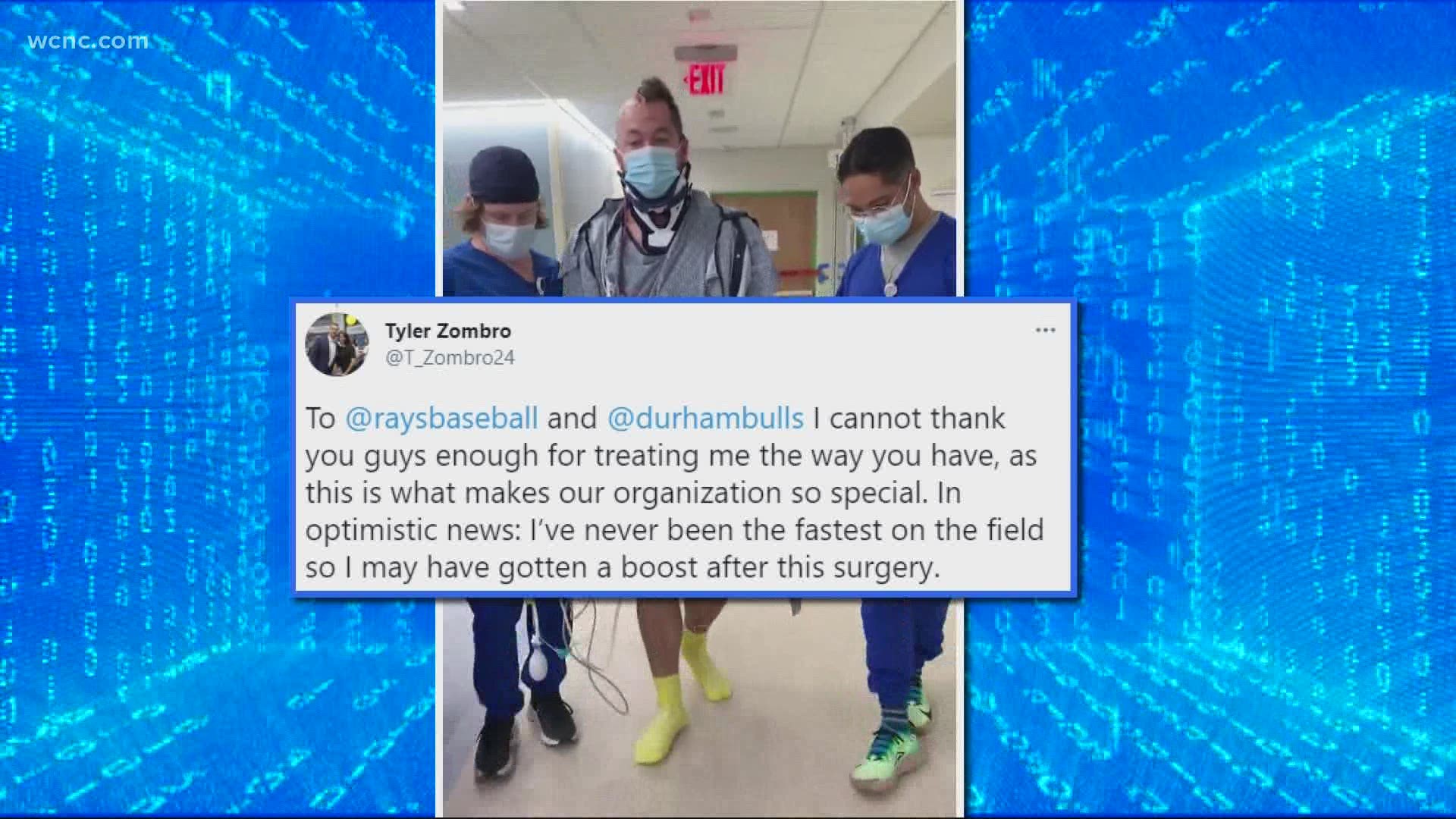 DURHAM, N.C. — Two weeks after being hit with a line drive during a Durham Bulls game against the Norfolk Tides on June 3, pitcher Tyler Zombro says he's thankful to be recovering.

In a series of tweets, Zombro said he is "in a very fortunate position all things considered" and thanked the Durham Bulls and Tampa Bay Rays for the support.

Note: Some of the images Zombro shared on Twitter are graphic.

RELATED: Durham Bulls player struck in the head by a ball

RELATED: Durham Bulls pitcher released from hospital after being struck in head by baseball

Zombro shared a series of photos of his recovery process, including a video of him walking with assistance from Duke Hospital staff.

To @raysbaseball and @durhambulls I cannot thank you guys enough for treating me the way you have, as this is what makes our organization so special. In optimistic news: I’ve never been the fastest on the field so I may have gotten a boost after this surgery. pic.twitter.com/h9YXbzTvSn

"To all of you that have showered my family and I with positive thoughts, I have no doubt that all of the prayer support kept God with me throughout that night," Zombro said in part of a tweet, adding, "as I’m in a very fortunate position all things considered. The outpouring support and prayer has meant the world to Moriah and I, and I certainly believe you guys have well wished me to an enhanced recovery."

On June 9, the Durham Bulls and Tampa Bay Rays confirmed in a release that Zombro had been discharged from Duke University Hospital but would continue with outpatient occupational and speech therapy. The Durham Bulls have not released a new statement regarding Zombro's recovery as of this writing, but their Twitter bio reads: "Get well soon, Z"

Thank you again to the entire baseball community for the support, I’m one lucky guy and can’t wait to get back out there (whenever that is)! God Bless you all! #BULLieve pic.twitter.com/NMlsyK8Q34

Locked On is the leading podcast network for local sports and is owned by WCNC Charlotte's parent company TEGNA.
Listen to Locked On here.