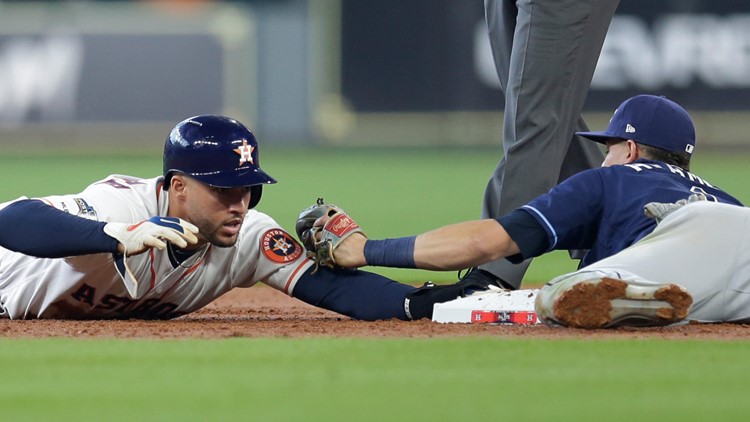 Photo by: AP
Houston Astros center fielder George Springer, left, is safe at second base on a steal as Tampa Bay Rays shortstop Willy Adames is late with the tag in the third inning during Game 1 of a best-of-five American League Division Series baseball game in Houston, Friday, Oct. 4, 2019. (AP Photo/Michael Wyke)

HOUSTON — The Tampa Bay Rays dropped the first game of the American League Division Series Friday afternoon in Houston by a score of 6 to 2.

The Astros now have a lead in the best-of-five series over the Rays.

Rays starter Tyler Glasnow had given up just three singles when he walked Josh Reddick on four pitches to begin the fifth. He struck out George Springer, but Altuve then tagged him for a two-run homer, lining a fastball into the left field seats.

The sellout crowd of 43,360, which included Astros Hall of Famers Nolan Ryan and Craig Biggio, erupted into deafening cheers and fans twirled bright orange towels as Altuve trotted around the bases, a huge grin plastered on his face.

Altuve has homered in Game 1 of the ALDS for three straight years, and the small-but-powerful second baseman now has nine home runs in 33 career postseason games.

Game 2 is Saturday at 9 p.m. when Gerrit Cole, who has won 16 straight decisions and led the majors in strikeouts, starts against Tampa Bay's Blake Snell. You can catch the game on Fox Sports 1.

The SportsLine projection model has the Astros as the favorite team, and CBS Sports doesn't disagree. The Astros won a franchise-record 107 games for the best record in the majors this season.

As CBS Sports reports, the Astros outscored the Rays 40-27 in regular-season games, but the Rays won four of the seven meet-ups this year.

Meetings between the teams are a case study in baseball salaries. The Astros began their season with a $165 million payroll -- as the Rays sat dead last on the payroll list with $53.5 million in salaries. It makes the Rays' accomplishments all that more impressive.

Dubbed the "Juice Box Series" by some, the series began by featuring Tropicana Field's team playing at Minute Maid Park. Both teams will be at The Trop for Game 3 on Monday in St. Petersburg.

10Sports will have complete coverage on wtsp.com and on 10News WTSP (Channel 10).

Click here to download the free 10News app and have Rays alerts sent directly to your phone or tablet.