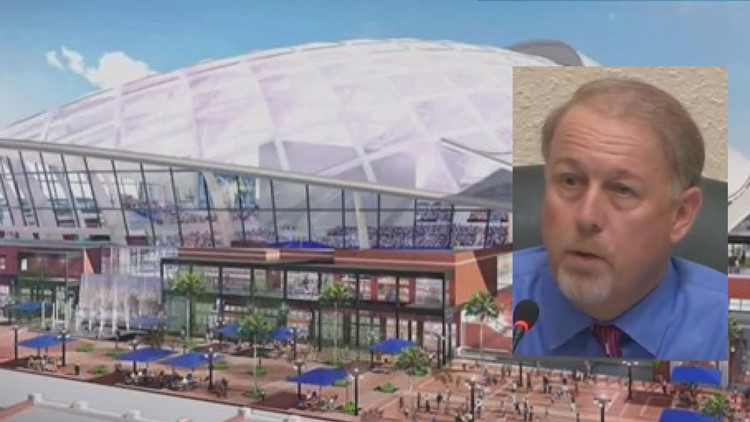 TAMPA, Fla. — Hillsborough County Commissioner Ken Hagan believes the county should still work on bringing the Tampa Bay Rays to Tampa even if the team decides to have a split season with Montreal.

During Wednesday’s county commission meeting, Hagan said the county is still considering the creation of an entertainment district in Ybor City.

“This would not necessarily be created for the purpose of being the Rays’ next home, but it would certainly place us in an enviable position when those negotiations occur,” Hagan said. “This concept is in its infancy.”

Hagan said, “no new public money” would be used for the proposal. He said the county would explore “private investment opportunities.”

In December 2018, the team could not finalize plans to bring a proposed $892 million stadium in Ybor City. The team’s three-year negotiating window expired with Tampa.

The Rays are committed to their lease at Tropicana Field in St. Petersburg through the 2027 season. The team would be liable if they left before the lease expires. The contract also prohibits the team from negotiating to play in another city.

"Jan. 1 hits. St. Pete says you can't speak to the Rays anymore," Raij said during Wednesday's meeting. "I would differ with that. I think we can speak with the Rays. We can't negotiate with the Rays. There is a difference."

Raij said he couldn't convince the city of St. Petersburg to "come to the table" to negotiate with the Tampa Sports Authority, the Hillsborough County Commission and city of Tampa.

Last month, Rays management and St. Petersburg city leaders met for the first time since the team announced it would consider splitting time between the Tampa Bay area and Montreal.

Opinion: Why the Rays won’t become a two-city team

“As I stated during our last meeting, we feel very strongly that if we want the team to remain in the region beyond 2027 when their agreement with St. Pete ends, we need to find a way to move this issue forward and have a conversation that allows Hillsborough to be at the table for consideration for the team’s next ballpark,” Hagan said.

Hagan said he did not like the idea of losing half the season to another city.

“I do not believe this concept is a ploy or an attempt to leverage more public finance,” Hagan said.

On Wednesday, Hagan called the Ybor City proposal for a new stadium, "a catalyst" for improving transit.

“If this duel home ballpark model allows and provides Tampa the opportunity to get back at the table and speak with the team, then we should consider it and be proactive in our planning,” Hagan said during Wednesday’s Hillsborough County Commission meeting.

The split-city concept faces other significant challenges. It includes paying for at least one new stadium and getting the MLB Players Association to agree.