The Rays season has ended after a competitive series. 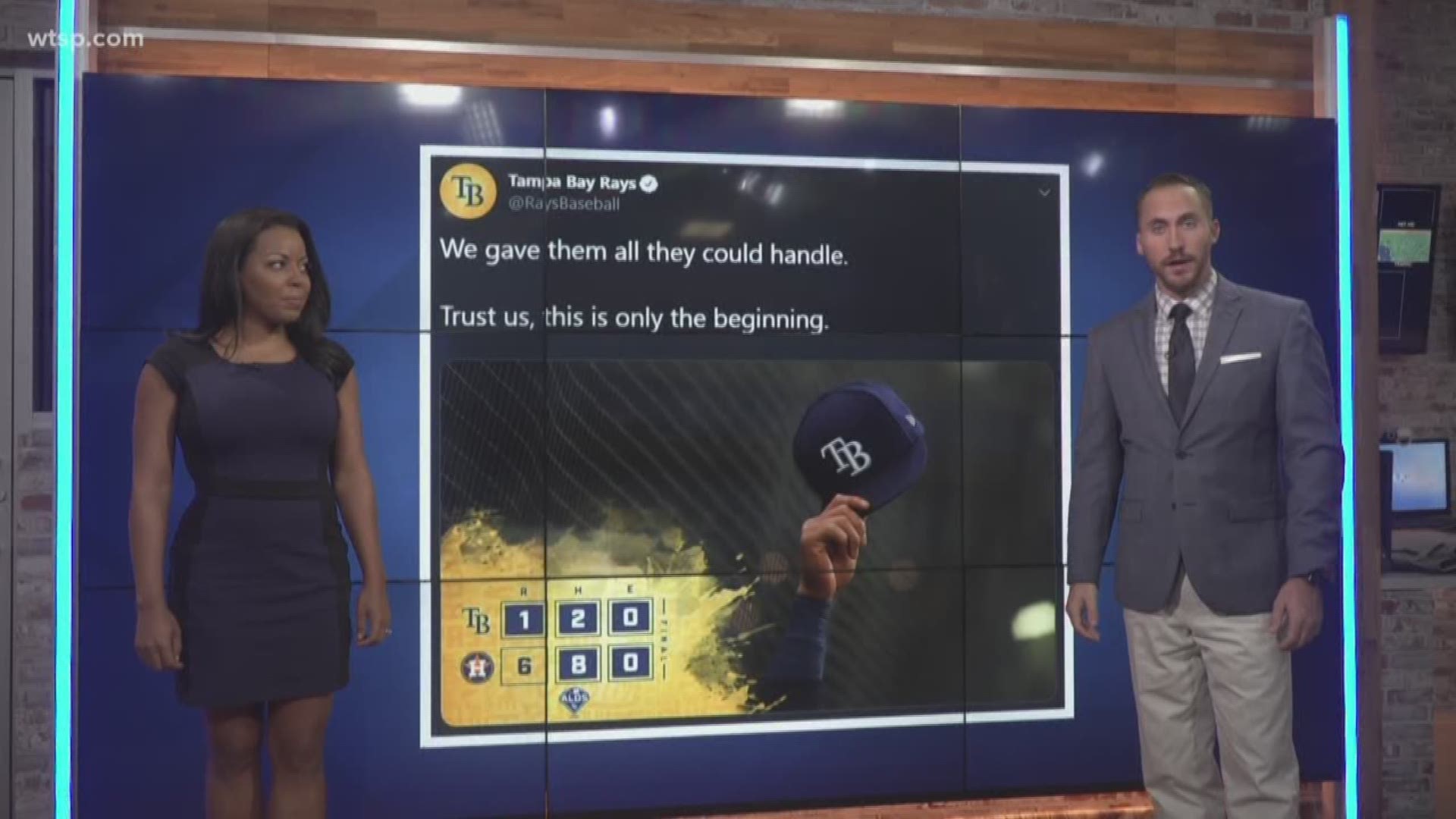 HOUSTON — The Tampa Bay Rays fell to the Astros in the winner-take-all American League Division Series Game 5 in Houston.

The Rays and Astros were tied up 2-2 heading into the start of Game 5.

The Rays will head home, as the Astros move on to face the Yankees in the American League Championship Series.

Scroll down for our live blog coverage of how the final game unfolded.

The Tampa Bay Rays fall to the Houston Astros 6-1 in the top of the ninth.

Michael Brantley homers to right field for the Astros.

José Altuve hits his own homer, setting a new MLB record. He now boasts the most postseason home runs by a second baseman with a total of 11.

The Rays bring in Brendan McKay to relieve Emilio Pagan. He's the ninth pitcher of the night for Tampa Bay, bringing their total to 30 pitchers in five games.

There was a play review in the bottom of the eighth to determine whether Yordan Álvarez touched second base on his way back to first. In the end, the umps called him safe.

The Astros make a double play to end the top of the inning.

In the bottom of the inning, the Rays set an all-time ALDS record. Tampa Bay has used 29 pitchers in five games.

The Rays need a major comeback if they hope to win the ALDS. Astros shortstop Carlos Correa demonstrated some impressive fielding in the top of the sixth inning.

The inning ended with no runs for either Houston or Tampa Bay.

The Rays are rotating quickly through their pitching staff. Chaz Roe started the inning, only to be replaced by Ryan Yarbrough, who was then relieved by Nick Anderson.

It's still 4-1 Astros to end the inning.

The Rays didn't do anything to tighten the score in the top of the third inning. And, Houston didn't earn any more runs in the bottom, either.

One noteworthy mention, though, was the impressive split by Rays first baseman Ji-man Choi in the bottom of the inning. You can watch it below.

Eric Sogard hasn't started for the Rays in nearly a month. But, he homers off the first pitch he sees. It's now 4-1 Astros.

An RBI base hit from Yuli Gurriel sends Alex Bregman home. The Astros are 4-0. For context, Houston has had five hits in just six at-bats.

Alex Bregman hits a double for the Astros, sending two runners home. Houston is up 3-0.

The Astros are not having any trouble hitting off Rays pitcher Tyler Glasnow. Blake Snell is in the bullpen.

Astros second baseman José Altuve hits an RBI single. And, the Astros are up 1-0 in the bottom of the first inning.

(AP) Eric Sogard was in Tampa Bay's lineup for the decisive Game 5 in the AL Division Series at Houston, the second baseman's first start in nearly a month while dealing with lingering right foot discomfort.

Sogard was batting fifth on Thursday night against Astros starter Gerrit Cole, who struck out 15 over 7 2-3 scoreless innings when the Astros won Game 2 to take a 2-0 series lead before the Rays won twice at home.

"You've got Gerrit, who is probably the highest strikeout pitcher in baseball. We value Eric Sogard as a very high contact-oriented hitter," manager Kevin Cash said.

In his only appearance this postseason before the ALDS finale, Sogard had a RBI single as a pinch-hitter in Game 1 on Friday.

Brandon Lowe started the first four ALDS games for the Rays at second base and was 4 for 16 with eight strikeouts. The rookie had the only hit off Justin Verlander in the series opener, but also had an error that game that led to two unearned runs.

Sogard's last start and last game at second base was Sept. 14, the day before he was a pinch-hitter in his final appearance of the regular season.

Cash said the only concern about Sogard would be how he responded to being on his feet throughout the game. But the manager described Sogard as confident and really excited to be back in the lineup.

"I feel good. Obviously the extra rest time has helped me a lot," Sogard said. "I'm confident out there I'll be able to do as much as I normally do."

RELATED: Five things to know ahead of Rays-Astros Game 5

RELATED: Here's where to watch the Rays vs. Astros for ALDS Game 5