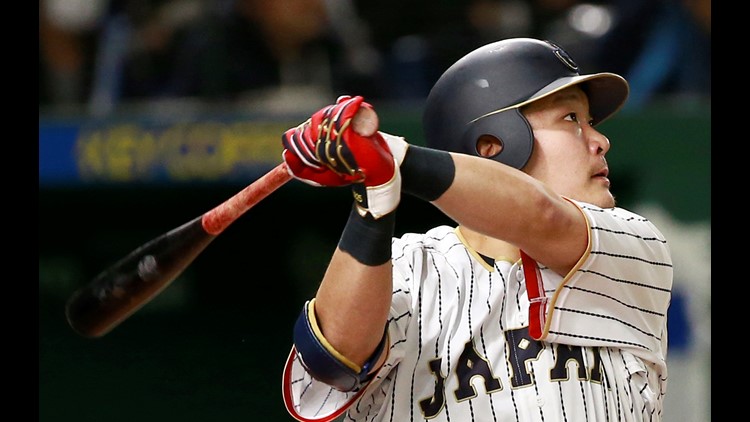 Photo by: AP
FILE - In this March 15, 2017, file photo, Japan's Yoshitomo Tsutsugo watches the flight of his solo home-run off Israel's pitcher Dylan Axelrod in the sixth inning of their second round game at the World Baseball Classic at Tokyo Dome in Tokyo. Before he pursues a career in Major League Baseball, Tsutsugo is on a mission to fix the sport in his native country. Tsutsugo said Friday, Jan. 25, 2019, after the 2018 season that he wants to play for an MLB team in the future. He will be eligible for international free agency in 2021 after 11 seasons with the Yokohama DeNA BayStars. Having already signed a contract to play for the Yokohama BayStars in 2019, the 27-year-old outfielder could go as early as 2020 via the posting the system. (AP Photo/Shizuo Kambayashi, File)

Yoshitomo Tsutsugo signed a two-year, $12 million contract, according to a press release from the Rays. He'll play as number 25.

The left-handed batter previously played ten seasons with the Yokohama DeNA BayStars in Japan under the Professional Baseball Organization. He maintains a batting average of .285/.382/.528 with a record of 195 doubles, 205 home runs and 613 RBI over 968 games and 4,000 plate appearances, according to the Rays.

He played for Team Japan during the 2017 World Baseball Classic, earning the Pool B Most Valuable Player honors with three home runs and a batting average of .320.

Tsutsugo will be the Ray's fourth-ever Japanese born player in the team's history. He follows pitcher Hideo Nomo, infielder Akinori Iwamura, and outfielder Hideki Matsui. The team said he will be the first Japanese-born player to start his major league career with the Rays.

RELATED: Rays not giving up on 'incredible' sister-city plan